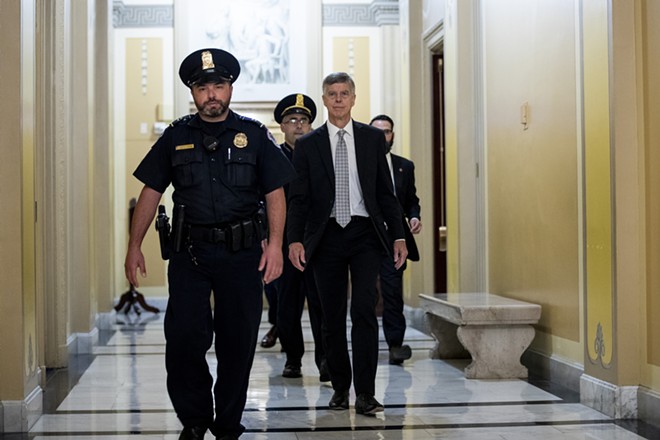 WASHINGTON — House Republicans ground the impeachment inquiry to a halt Wednesday, staging an attention-grabbing protest at the Capitol that derailed a crucial deposition as they sought to insulate President Donld Trump against mounting evidence of misconduct.

House Republicans stormed into the secure office suite where impeachment investigators have been conducting private interviews and refused to leave.

Chanting “Let us in! Let us in!” about two dozen Republican lawmakers — most of whom are not on the committees conducting the inquiry and are therefore not entitled to attend their hearings — pushed past Capitol Police officers to enter the secure rooms of the House Intelligence Committee, which is leading the investigation. Republicans on the committees have been in on the hearings and have heard all the witnesses.

Frustrated Democrats temporarily shut down the session before resuming it in the afternoon, when Laura Cooper, deputy assistant secretary of defense for Russia, Ukraine and Eurasia, began testifying.

Republicans were rushing to Trump’s defense. Some brought their cellphones into the secure room, which is not permitted and considered a security breach. The sergeant-at-arms, the top law enforcement officer in the Capitol, was called in to handle the situation.

The standoff came the day after the explosive testimony of William Taylor, the top American diplomat in Ukraine, who effectively confirmed Democrats’ main accusation against Trump: that the president withheld military aid from Ukraine in a quid pro quo effort to pressure that country’s leader to incriminate former Vice President Joe Biden and smear other Democrats.

Democrats said the timing was no coincidence and characterized the Republican disruption as a desperate attempt to deflect attention from the damaging testimony.

Trump took to Twitter to assail Taylor and offer encouragement to Republican protesters.

For weeks now, lawmakers on three House committees — Intelligence, Oversight and Reform, and Foreign Affairs — have been conducting private question-and-answer sessions. Those sessions are attended by both Democrats and Republicans, and both have an opportunity to question witnesses; more than 100 of the 435 members of the House are eligible to participate. Democrats said they plan to hold open hearings after the committees finish deposing witnesses and intend to make public complete transcripts of witness testimony after they have been reviewed for classified material.