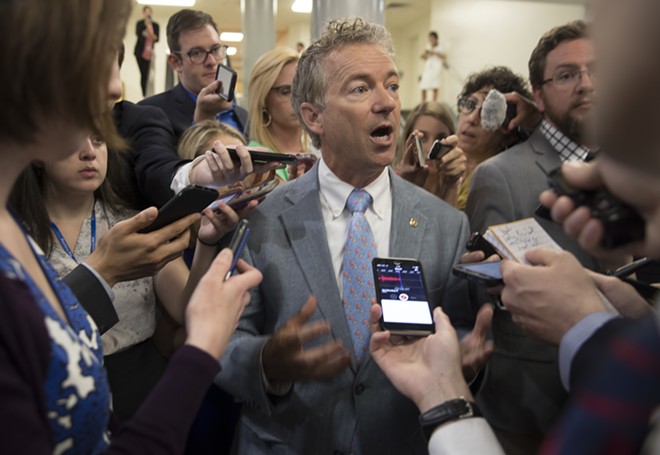 Stephen Crowley/The New York Times
Sen. Rand Paul (R-Ky.), who opposes current Senate health care bill, comments on its Congressional Budget Office score, in Washington, June 26, 2017. The bill would increase the number of people without health insurance by 22 million by 2026, only slightly lower than the 23 million more uninsured that the House version would create, according to the CBO.
By JENNIFER STEINHAUER and GLENN THRUSH
© 2017 New York Times News Service

Republican leaders seemed to be taking a page from the playbook used to get a bill over the line in the House, trying to find ways to appease the most conservative members of their conference while pressuring moderates to fall in line with fewer concessions. Sen. Mitch McConnell of Kentucky, the majority leader, cast his lot early on by allowing the bill to be more conservative than his moderate members wanted, setting the tone for the debate.

Senators from states that expanded the Medicaid program — and Sen. Susan Collins, R-Maine — would most likely not brook many of those changes, especially the measure to severely undermine protections for people with pre-existing medical conditions. They want more money for mental health benefits for people addicted to opioids and money for states to cover people left behind by the rollback of the Medicaid program in both the House and Senate versions.

On Monday, three Republican senators — Collins, Rand Paul of Kentucky and Ron Johnson of Wisconsin — said they would vote against the motion to begin debate scheduled to hit the Senate floor Wednesday, joining Sen. Dean Heller of Nevada, who made the same pledge Friday.

A bevy of other senators from both flanks of the party seemed headed in the same direction if they did not see changes made to the Senate health care bill, leaving the measure in deep peril, since Republicans can only lose two votes from their own party.