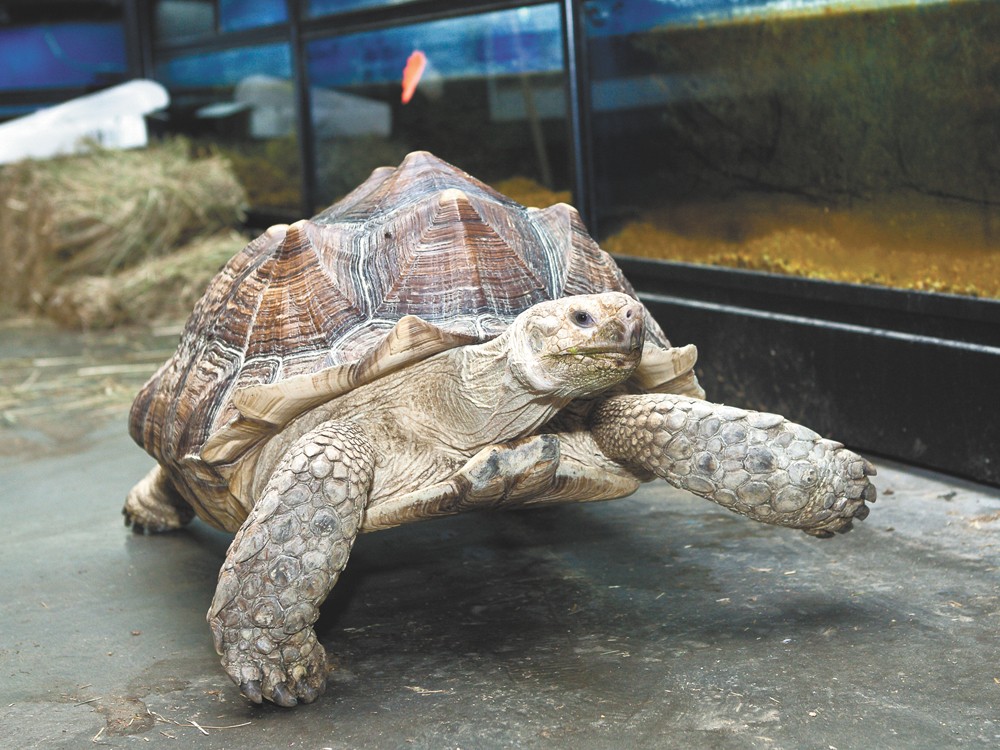 Stephen Schlange
Weighing in at 106 pounds, Thor was treated for a slight respiratory infection.

The electric shock gave Eryn Plummer the first indication that the tiny fish she rescued from Evergreen Pet Shop could be a monster. It turned out to be a baby electric freshwater catfish, a carnivore that can grow to three feet long and bring grown men to their knees with its charge.

“After I started doing research, I was really surprised any place would even sell a fish that could get that big and dangerous,” Plummer says.

She was one of hundreds of people who showed up at the Spokane Valley pet shop on East Sprague on Nov. 10 after hearing that all the animals — some sick and neglected — needed new homes immediately. The store had been closed for months after the state revoked its business license on Aug. 7 for failing to pay back taxes, and volunteers were appalled to find murky tanks, freely roaming cockroaches and pet rats dead in their cages. By Nov. 11, every last bird, rat and fish had found a new home. But because so many of the pets need special care, even the most well-intentioned adopters could be in over their heads.

The tiny catfish was lucky — Plummer’s fiance was already planning to get a giant fish, and they had a big tank ready. They named the little guy Waldo because he’s hard to spot hiding beneath his pieces of driftwood. But Plummer is concerned other people may have picked up pets they’re not prepared to care for.

“I think there were some people who heard ‘free’ and just wanted to get something,” she says.

An unknown number of reptiles were already gone when Jeremy Riley, who runs Haven Aquatica reptile rescue, arrived at the store. It was chaos, he says, and he saw people leave with animals they didn’t seem to be familiar with.

“I said, ‘Hey, that’s an awesome snake, what kind is it?’ And they couldn’t tell me,” Riley says.

Since then, he’s been working non-stop with volunteers to coordinate care for about 30 reptiles. Some snakes were adopted by experienced breeders, and other animals have been getting treated at the vet.

Every single reptile they’ve seen has been sick, with ailments ranging from respiratory infections to small injuries. A leopard tortoise had to be cleaned twice to get all the beetles and spiders from under its shell, and the tortoise pen was infested with cockroaches.

“With proper care, none of this would have happened,” Riley says.

He’s most concerned for those reptiles that were already taken. Particularly with respiratory infections, inexperienced owners might not notice until it’s too late.

There is no record of exactly how many animals were in the store. Joe Mayo, the property owner, estimates there were several hundred creatures in total when he took control from the shop owners on Nov. 9 — six cats that were adopted right away, about 50 birds and many other rodents, reptiles and fish.

The place was a mess, Mayo says, but rumors of dead cats and dogs are not remotely true. He was grateful to people who showed up to help clean, and tried to make sure many of the animals went home with knowledgeable volunteers. In many cases, he just had to trust people when they said they already had snakes or a nice aviary waiting at home.

“As far as I know, the animals went with people who said they could care for them,” he says.

The shop owners had been having financial troubles for some time, Mayo says, and he’d paid the previous two utility bills himself to keep the power on for the animals. He met with the owners that morning, and they agreed to sign over the remaining assets instead of letting the situation drag out.

“The good thing is they agreed to sign everything over,” he says.

They shook hands and left on amicable terms, Mayo says, so it was a surprise to see the owners accuse him of changing the locks in a statement sent to local TV news.

Also in the statement, the shop owners said road construction and repairs after a fire had derailed the business, and they had hoped to reopen after the store closed in August. “We then realized that reopening would not be possible. ... We regret the situation that has happened, and are happy that animal are being placed into homes.”

The situation is being investigated by the Spokane County Regional Animal Protection Service for possible violations of animal neglect and cruelty laws. Director Nancy Hill says they expect to make a decision about charges toward the end of the month.

SCRAPS received a complaint about Evergreen Pet Shop shortly before the owners agreed to sign over the property. A SCRAPS officer toured the shop in early October following a previous complaint and did not see any violations at that time.

While the investigation continues, many of the rescued animals are recovering. Thor, a tortoise who weighed in at 106 pounds, was a priority for Riley at Haven Aquatica because he seemed a little sluggish. A week after the rescue, Thor had gotten vet treatment — Mayo, the property owner, paid the bill — and was starting to get inquiries from prospective homes. Though there is progress, Riley doesn’t expect the problems to be over anytime soon — it may take unprepared owners a few weeks to realize they’ve got more than they can handle, and even longer for sick animals to get well.

“These animals are going to be recovering for many months to come,” Riley says.