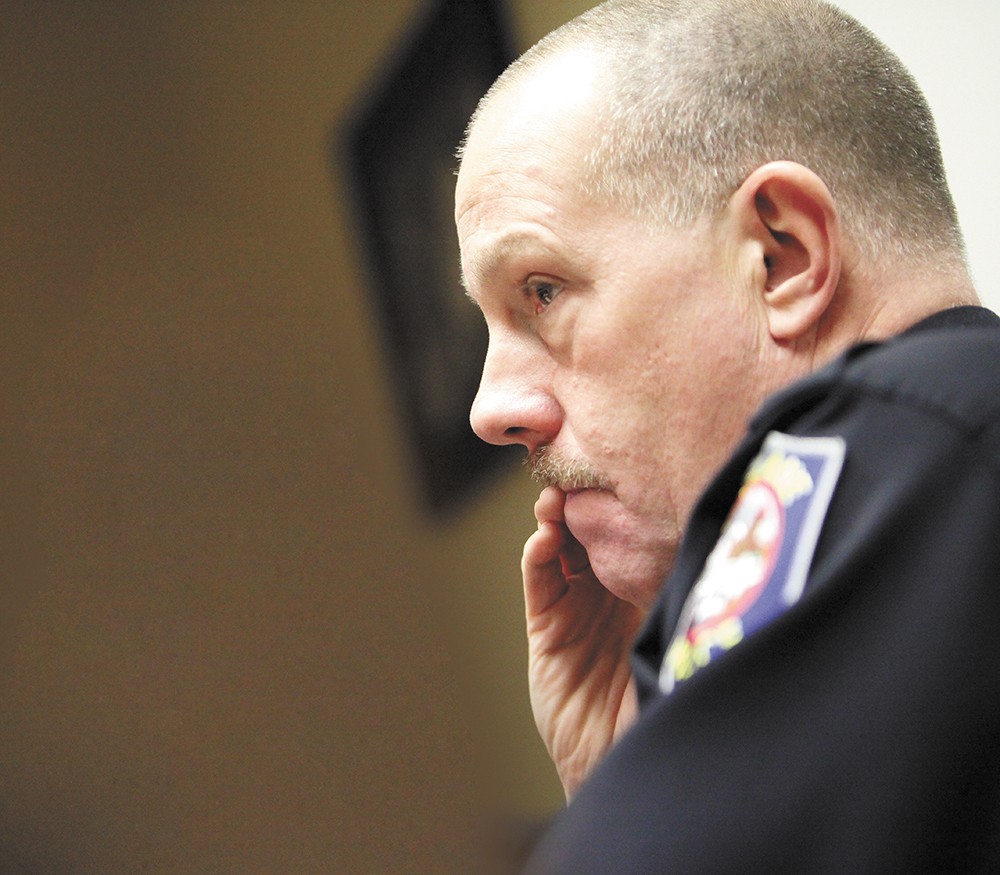 Young Kwak
Police Chief Frank Straub: "Force is never going to go away from what we do for a living."

Braced behind a patrol car

for cover, a dozen Spokane Police officers train their eyes and weapon sights on a 26-year-old man sitting in the nearby grass. Negotiators struggle to reason with the man, who holds a stubby knife in one hand while smoking cigarettes with the other.

Police had closed off the busy intersection where Sprague Avenue meets Browne Street on an overcast June afternoon. They called in mental health professionals to speak with the reportedly suicidal man while an armored car crept into place on the hill behind him.

After a nearly five-hour standoff, the man stands to leave. Talk instantly turns to force. A flashbang grenade explodes as officers fire less-than-lethal beanbag rounds. They quickly swarm the man and take him into custody for a mental health evaluation.

"Force is never going to go away from what we do for a living," Spokane Police Chief Frank Straub says. "That, unfortunately, is a part of the business."

Despite recent efforts to promote a culture of de-escalation, Spokane officers still resort to beanbag rounds, Tasers, body blows, neck holds and other techniques about 10 times a month on average. Officers have also shot six people, five fatally, in the past 18 months.

The department now closely tracks "use of force" incidents with public reports on the officers and circumstances involved. But an in-depth review of the 145 reports filed for 147 incidents in 2013 suggests officers face minimal second-guessing while citizen complaints have little chance of holding up against police interpretations of events.

After several years without an excessive force complaint being validated, Center for Justice attorney Julie Schaffer and other advocates hope an ongoing audit by the U.S. Department of Justice will help determine whether Spokane officers are, in fact, so perfectly restrained.

"We're asking the same question," she says. "Is this a flawless record or a flawed system?"

SPD records and news archives indicate Internal Affairs investigators have not issued a "sustained" finding of excessive force since 2006, despite hundreds of incidents and dozens of citizen complaints — though one recent officer's use of force was determined to be "out of compliance" with department policy. (See "Unauthorized Maneuver" below.) 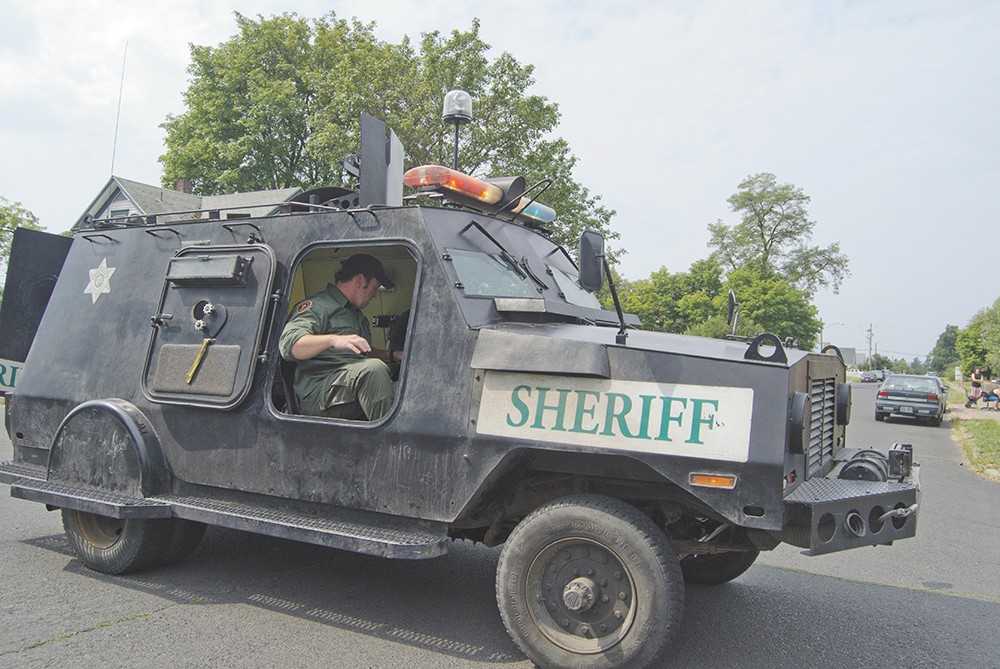 Jacob Jones
An armored vehicle from the Sheriff's Office arrives at the scene of a tense standoff last August on East Sprague Avenue.

Straub, who expressed skepticism regarding those numbers before taking over in late 2012, now says reports reflect a careful and restrained police staff that resorts to force in just 1.5 percent of arrests. He says about 50 percent of those incidents involved an actively fleeing or assaultive suspect, many of whom were under the influence of drugs or alcohol.

"What the community is going to be shocked by is the fact that this department really doesn't use all that much force," Straub says, adding, "[And] I can't blame any of the officers for using force when they're being assaulted."

Police officials report SPD officers made 9,621 adult arrests in 2013, resulting in 147 uses of force. About 20 of those incidents involved an officer merely pointing a firearm, which was recorded for the first time after a recommendation from the police ombudsman. Those other 127 incidents closely match the reported force data of 125 incidents in 2012 and 126 incidents in 2011.

"You would be hard-pressed," Straub says, "to find another police department that has those kinds of statistics."

"Either the system is so flawed and sloped in favor of the officers ... or the reality may be that our officers are performing according to policy," he says. "I would like to believe that. I'm not convinced of that totally yet."

The Spokane Police Department has publicly released 145 use-of-force reports for 2013, involving 95 different officers. Two incidents remain closed as part of active investigations. Most of those incidents resulted from officers using physical takedown or neck restraint techniques. At least 32 involved a suspect being Tasered.

Officers listed alcohol or drugs as a factor in about half of the incidents. At least 30 cases involved some reported sign of mental illness, such as delusions or suicidal intent. Many citizens reported injuries involving scrapes, K-9 bites or Taser probe puncture wounds. At least 11 people were rendered unconscious via a chokehold.

Straub says his command staff reviews each use-of-force report. Two or three supervisors also check each report, but nearly two-thirds of incidents appear to pass through the chain of command without any questions or requests for clarification. About 50 cases include notes sending them back at some point, but most address typos or missing sections.

In a handful of cases, supervisors singled out "exceptional techniques" involving discouraged uses of force, such as punches to a suspect's face or elbow strikes to a person's head. Those officers had to clarify why they resorted to such force and received counseling on preferred tactics.

Even the slightest force undergoes multiple reviews, Straub argues. All incidents also get tracked in an early warning system that can trigger a supervisor if an officer racks up an unusual number of incidents. Reports appear to reflect an increase in supervisor questions or requests for clarification toward the end of the year.

Straub says the introduction of officer-worn body cameras and a police ombudsman commission will only strengthen officer accountability.

"It's going to be very interesting," he says. "The Spokane community is going to get to see just how professional and dedicated the police department is, and to a large degree how much crap they put up with on any given day."

Burns says he understands the suspicions surrounding the department's clean use-of-force record. He hopes the recent emphasis on de-escalation will result in fewer uses of force and improved dialogue with the public. He suggests that the tense June standoff along Sprague Avenue might have ended differently a few years ago.

"Ultimately, I do believe that we're seeing some of the benefits," he says. "I'm seeing increased awareness."

The ongoing use-of-force audit from the Department of Justice involves a review of force incidents and outcomes for the past five years. Findings and any policy recommendations are expected this fall. Burns says that objective analysis should provide an opportunity for citizens to re-evaluate their confidence in the Spokane police force.

"There's some really good things that we've been doing," he says, "and I expect there are some things we'll do better."

Schaffer, with the Center for Justice, says local advocates also will be eager to see the DOJ findings. She says such an independent review remains critical to rebuilding public trust.

Straub says preliminary meetings with DOJ auditors have been positive. Auditors have not expressed any concerns regarding the department's use-of-force practices or review process.

"I think there's been a myth created around the amount of force that our officers use," Straub says, adding, "We're doing a pretty damn good job here." ♦

A bicyclist riding without a helmet in September led to the only recent Spokane Police use-of-force incident to draw official reprimand, after a pursuing officer used his patrol car to knock the man off his bike. Just after midnight on Sept. 19, an officer ordered the bicyclist to stop, but he sped away and officers took chase.

Internal Affairs records indicate Officer Christopher Conrath soon joined the pursuit along Third Avenue, yelling out his window at the bicyclist that he was under arrest. Conrath says he decided to bump the rear tire at low speed, which toppled the bike. The rider reportedly was able to step off without falling to the ground.

Conrath then used an arm bar technique to take the suspect to the ground and cuff him. The man reported abrasions to his elbow and right side, but refused medical attention. Capt. David Richards and other supervisors filed complaints, arguing that the use of a vehicle to stop a subject could be considered deadly force — triggering an Internal Affairs investigation.

Conrath acknowledges he intentionally bumped the bike, but did not expect to injure the rider.

Assistant Police Chief Rick Dobrow later changed the type of allegation from excessive force to an unauthorized PIT (pursuit intervention technique) maneuver, which is typically used to spin out fleeing vehicles. He issued a sustained finding against Conrath, ordering a "Document of Counseling" corrective letter as the official sanction.

"You are reminded that the use of a PIT maneuver is not authorized for two wheel vehicles, to include bicycles as was the case in this incident," the letter states. "In the future, you are directed to act within department policy when using this technique."