A dark, futuristic satire, this was our favorite story from this year's fiction contest. 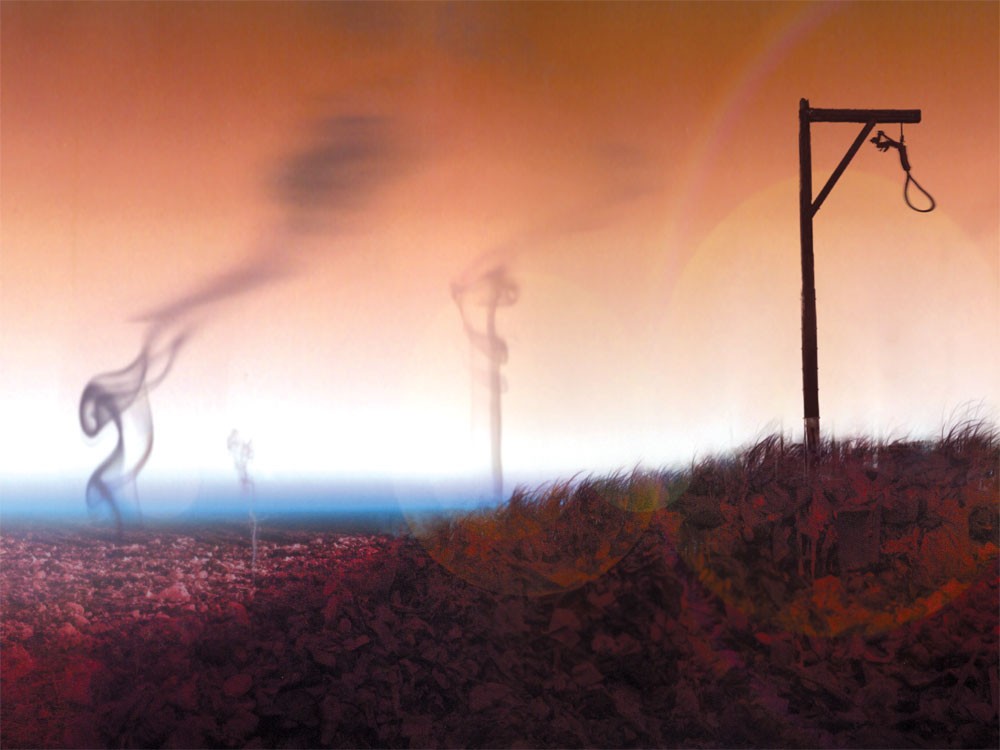 PREFACE: Though this darkly imagined view of what might await us has no holiday cheer, we might be wise to consider it our Ghost of Christmas Future. In a world where slave-takers and flesh cults roam, highly rational yet primitive clans struggle to survive. Through them, and their constant battle to endure, we see that even in the darkest times, good can prevail. Despite the reign of the cruelest hearts, justice can survive. (Nicholas Deshais)

Elder Jeremiah caught the boy stealing our No. 12 dog, a pregnant gray and black spaniel, in a grove of poison maples beyond our encampment perimeter. He beat the boy with an iron vent pipe, chained him to a post and left him for the Judgment. Elder Jeremiah cursed while carrying the dog’s carcass and the boy’s spear fashioned from an old mop stick and tipped with four splayed steel spikes. The dog will be eaten before the sun is down, although custom is breeder-dogs are not to be eaten until barren. Our clan uses statistical tables to calculate probabilities for survival when a successful breeder-dog is removed, and with blade-thin margins, it is a serious event to lose even one.

As the Spokan-Palous clan’s Adjudicator, I will analyze the evidence. I will judge him. I will not determine the sentence — the Sentencing Council will. The boy appears to be 11 to 12 years old, with an emaciated frame splotched with suppurating scabs and boils on his chest. He wears torn black canvas pants, sandals of tire rubber and rope, and no shirt. He is pre-pubertal. His head is shaved except for a 50cm mud-caked blonde cord of hair plunging from his crown down his back and braided and banded with filthy scraps of leather. Inked into the left side of his head is an unknown clan tattoo — a red scorpion in a circle of flame. So many strange clans … our valley stinks of interlopers since the dying season grew to 10 months a year, the outlands desiccated of edibles, arterials coursing with the violent hunger of a thousand roaming souls.

I kneel and tilt his head back. He’s semi-conscious, moaning with ensanguined foam bubbling from his mouth, fountaining from where broken teeth, smashed by a hard-swung pipe, lacerated his lips and cheeks. The boy cannot speak, his tongue amputated years before, a practice of slave-taker clans in eastern Oregonia.

I convene the Judgment once the boy regains awareness. He rocks forward to examine his chaining. The clan attends to witness. Elder Jeremiah testifies he heard the perimeter detector alarm sound at 0940, followed by a loud yelp from the breeder pens, so he ran to the pens and sighted the accused scrambling to the poison grove with the No. 12 dog slung over his right shoulder and a gore-tipped spear in his left hand. He yelled at the boy to stop, but the boy continued to run, so Elder Jeremiah pursued him and beat him to the ground with the heavy pipe.

“Did the accused show any inclination to cooperate with your directive?” I ask.

“No, Adjudicator, he ran like a methane-demon from the Third Book of the New Revelations, glory say His name!” I raise my hand to preempt any hooting or giggling from the audience — or worse, amens.

“Present the evidence,” I say to Bailiff Malachi, who drops the dog carcass and the spear. Elder Jeremiah confirms the evidence, so I call for additional witnesses, of whom there is one, the Child Angelique, who verifies the testimony, as she was near the pens when the alleged crime occurred. I ask the accused if he desires to write out or signal a statement in his own defense. He stares downward and shakes his head as the dirt beneath his right leg begins to darken with his urine. I raise my hand to silence the clan, but they are hushed by the sight of this boy.

I wave Bailiff Malachi over to remove the dog and spear. Then I say, “The hearing moves to the Deliberation while I review the evidence and determine the final judgment. During the Deliberation, I am solely responsible to determine guilt or innocence. During Sentencing, I am required to confer with three councilors — three elders of my choosing along with two additional adults and a juvenile chosen by the clan. A simple majority wins, and I am the breaker of ties.” The members are selected, and we walk to the council tent to deliberate.

The council and I sit cross-legged in a circle. I deliberate only for a moment. “I find the boy guilty of dog-raiding and -killing but suspend judgment on a possible finding of one count of an anticipated homicide based on the loss of a meat breeder, suspended contingent upon sentencing for the convictions.”

Elder Horatio sputters and points at me. “This is discretionary tomfoolery,” he says. “You are leveraging a sentence by holding a suspended judgment over our heads. I beg, respectfully, for you to reconsider and find on that count.”

“I understand your request and deny it. A projected homicide of a Spokan-Palous is a mandatory killing sentence. The only question, then, is how we put him to death, whether by stoning, hanging, drowning, spearing, shooting — let’s refrain from burning him alive if we can. But first I want to hear if there is any restoration that could be performed by the defendant for his acts.”

Arguments, rebuttals, and pejoratives emerge from the council like enraged shit-wasps swarming in obsidian tornados from sewage-filled ditches — strepent and stingerful.

Outside the tent, in the searing heat of February, two Spokan-Palous foraging parties depart as a hunting party returns with a bag of three scrawny robins, four gophers, one squirrel, and a surprise kill of a badger — a species unknown since the Melt Age, caught in the open on a scalded clay lakebed and dispatched with a high-velocity .223 round. Subsistence in the valley remains viable, although the margins attenuate each year with the longer dying season, the hemorrhaging of intruders from the outlands — raiders, slave-takers, bone-eaters, flesh cults, clan fragments and the banished. Suturing our ragged margins are recently discovered probability and statistics algorithms used to optimize local resource management.

The council is ready to vote on a disposition. Their recommendation is to kill the boy for raiding and wasting the breeder-dog. Elder Horatio acts as spokesman and says, “We find a killing sentence to be most fitting for the totality of the destruction of a pregnant dog with a proven history of two litters per year, averaging eight live births per litter for 16 potential mature dogs. When you add in anticipated new breeders from the litters, it is a substantial and lethal reduction to the food resource pool of the Spokan-Palous, per survival probabilities. His crime is egregious.”

“Is there an opposing voice to be heard before I poll?” I ask.

The Juvenile Emori rises and says in a reedy voice, “Yes, I’d like to be heard.”

“You may. Please state your case.”

“I think he could be a slave for us. I know we aren’t a slave-taker clan. But we need one more body to work the water recycling baffles. Our production is 26 to 30 liters a week low since the Juvenile Haraldik lost his arm to the poisoning and has not been able to work. Besides, and I know this sounds, well, soft … but he’s just a little kid — he’s a boy-child not a boy-juvenile, and if we kill him, we will be like the bone-eaters or the flesh cults. He’s too young just to kill. He could contribute to the good of the clan and for many years — we need water as much, or much more, than meat. That’s all. Thank you for your consideration, Adjudicator.” Elder Horatio starts to raise his hand to rebut, but I shake my head and say, “Thank you, Emori, for your argument.”

I poll the council and all but Emori vote for the killing and sign the final order to hang the boy.

He is hung at sunset. He had a faint smile on his broken mouth. He is through stealing dogs and hiding in poison groves. The clan watches silently then returns to their tasks. The body is removed for preparation with the No. 12 dog for the evening meal. I wonder if the ocherous glow in the west is only the sunset or if the fires in the outland grow near.

The next morning, Emori asks if he can show me the survival probabilities he’s calculated using a comparative analysis of resource choice.

“If the council had agreed with me and we’d slaved the boy, the extra water production improves clan survivability by a 619 percent margin above dog recovery, and begins immediately — and that’s without the long-range dying-season forecasts to adjust the projection. I used seven years as the base.”

I examine the calculations. His numbers are correct. Keeping the boy alive predicted robust benefits of future mortality avoidance.

“Emori, this is solid work and helpful. We will talk more later.”

After he leaves, I summon Elder Jeremiah and six of his men and direct them to arrest Elder Horatio and the others from the Sentencing Council who voted to kill the boy, on charges of aggravated wastage of water and future homicides to be determined. I ask about the firewood supply.