Sleep apnea can cause more than daytime fatigue 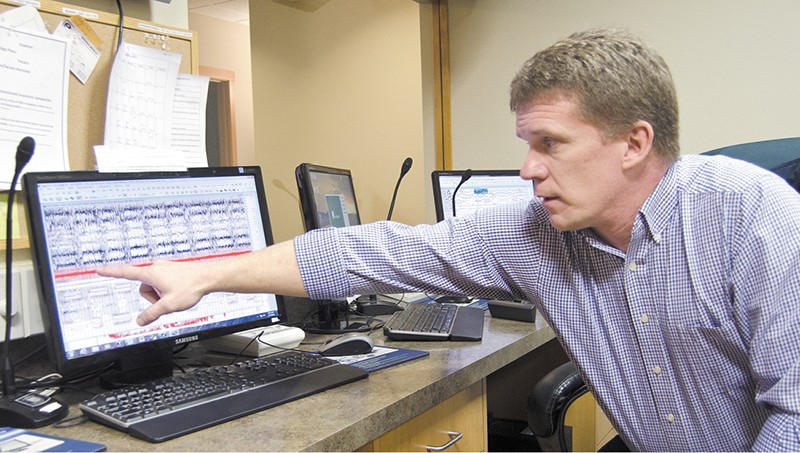 Curt Helsper traces his finger along a jagged line charting a patient’s breathing throughout a recent overnight sleep study. Moving along the line, he points out dozens of flat breaks in the line, counting several breaks each minute.

“That’s where the patient isn’t breathing,” he says, checking the length of one break. “This one’s just under 23 seconds long.”

Helsper, technical director for the Aspen Sleep Center in Spokane Valley, says this patient snorts and thrashes all night long, struggling to breathe. He wakes up exhausted. He nods off at work. It’s all due to a common sleep disorder called sleep apnea.

“Basically, when he’s sleeping he’s not breathing,” he says of the patient.

The American Academy of Sleep Medicine estimates as much as 4 percent of the adult population suffers from some form of obstructive sleep apnea, which occurs when soft tissue at the back of the throat collapses into a person’s airway when he or she sleeps, blocking oxygen to the body.

Michael Coats, a neurologist and sleep expert at Aspen, warns that sleep apnea increases risk of high blood pressure, heart disease and stroke. The resulting daytime fatigue can also lead to inattentiveness at work and increased risk of occupational injuries.

But with growing awareness in recent years and new therapies, people struggling with sleep apnea now have more options than ever before.

“It’s something that is diagnosable and treatable,” Coats says confidently.

While those populations face the highest risks, Coats notes even younger patients, women and people within a healthy weight range can develop symptoms of sleep apnea.

The Spokane area has four sleep labs that can perform various sleep testing, including overnight evaluations. Inside the Aspen Sleep Center, patients can undergo testing for 84 different sleep disorders, but sleep apnea is by far the most common. Technicians welcome patients into cozy motel-like rooms with TVs, lamps and private bathrooms.

These rooms have also been wired with infrared cameras and microphones to document sleeping patterns. Technicians connect monitors and belts to patients to measure brain activity, breathing, heart rate, oxygen levels and other vital signs.

Many sleep physicians express a preference for overnight evaluations in a controlled sleep lab. Helsper says cheaper at-home tests, measuring heart rate and oxygen levels, can show warning signs, but do not include as much observation or track certain variables.

“The best thing that patients can do if they suspect that there might be a potential sleep disorder is they just need to seek a consultation with a sleep physician,” he says. “These board-certified sleep physicians are experts in what they do.”

Once tested, patients can explore a variety of treatment options.

“It is the most effective treatment for most people,” he says.

CPAP involves wearing a pressurized mask over the nose or mouth while sleeping to prop open the back of the throat with air pressure. While some find the mask uncomfortable, Coats says it offers the best results for the effort.

Some patients can seek a surgical solution, Coats says. Procedures include removing tonsils, cutting away sinus tissue or realigning the jaw.

Sleep experts have also started to embrace the use of mouth guard-like oral appliances to hold the jaw forward. Spokane dentist Robb Heinrich, with Sleep Better Northwest, says oral appliances offer a versatile middle-ground option for patients who cannot get used to a CPAP mask.

“We have a number of different appliances we use,” he says, noting that for patients on the go, an appliance is much more portable and does not require electricity.

Heinrich says he does not make oral appliances for patients without a consultation from a sleep physician. He stresses the importance of continually working alongside physicians to pursue the best treatment for each person.

“We don’t just make an appliance and that’s it,” he says. “We do the follow-up.”

With the many increased health risks associated with the disorder, Helsper says the old medical warning applies to diagnosing and treating sleep apnea.