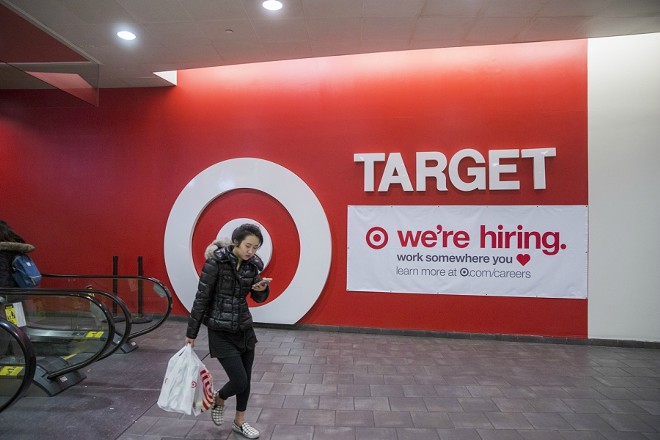 Mark Abramson/The New York Times
A sign advertises hiring at a Target store in New York, Nov. 19, 2017. Holiday hiring provides an annual jolt to the economy, boosting the incomes of hundreds of thousands of families at Christmas time and providing people a chance to re-enter the labor force, even if only for a few months.
By MICHAEL CORKERY
© 2017 New York Times News Service


After 14 years of staying home to raise her family, Melanie Colon landed a job for the holidays at a Target store in Queens, New York, selling toys, bedsheets and linens. She hopes it will lead to a full-time position.


“For me, it’s about getting back into the workforce,” she said.

Colon, 36, is part of an army of temporary retail workers who are hired every year to help with the holiday shopping crush.

Holiday hiring gives the economy an annual jolt, raising the incomes of hundreds of thousands of families at Christmastime and offering people like Colon a chance to make some income, even if only for a few months.

But like so much about the retail industry, holiday hiring is in flux, even as stores are poised for a big shopping season. While some large retailers like Target are making a big push, others are hiring fewer temporary workers — or almost none at all.

Walmart, the nation’s largest retailer and private employer, for instance, has no plans for a hiring spree this holiday season. Instead, the company said it was giving “millions more” hours to its thousands of part-time employees.

Across the country, retailers are expected to hire from 500,000 to 550,000 seasonal workers this holiday, down from the roughly 575,000 who were hired last year, according to the National Retail Federation.

The decline reflects the forces buffeting the retail industry and the broader economy.

With more sales moving to the internet, many brick-and-mortar stores are seeing less foot traffic, which means they need fewer workers manning the aisles. Retailers are also on pace to close thousands of stores this year.

“The industry is going through a transformation,” said Jack Kleinhenz, chief economist at the National Retail Federation.

Holiday sales are projected to increase by as much as 4 percent from a year ago, to $682 billion, according to the retail federation.

“This is as good as it gets,” said Mark Zandi, chief economist at Moody’s Analytics. “If they can’t survive in this environment it is hard to imagine they will be around for very long.”