CdA’s already gone to single-stream recycling, with Spokane hot on its heels. 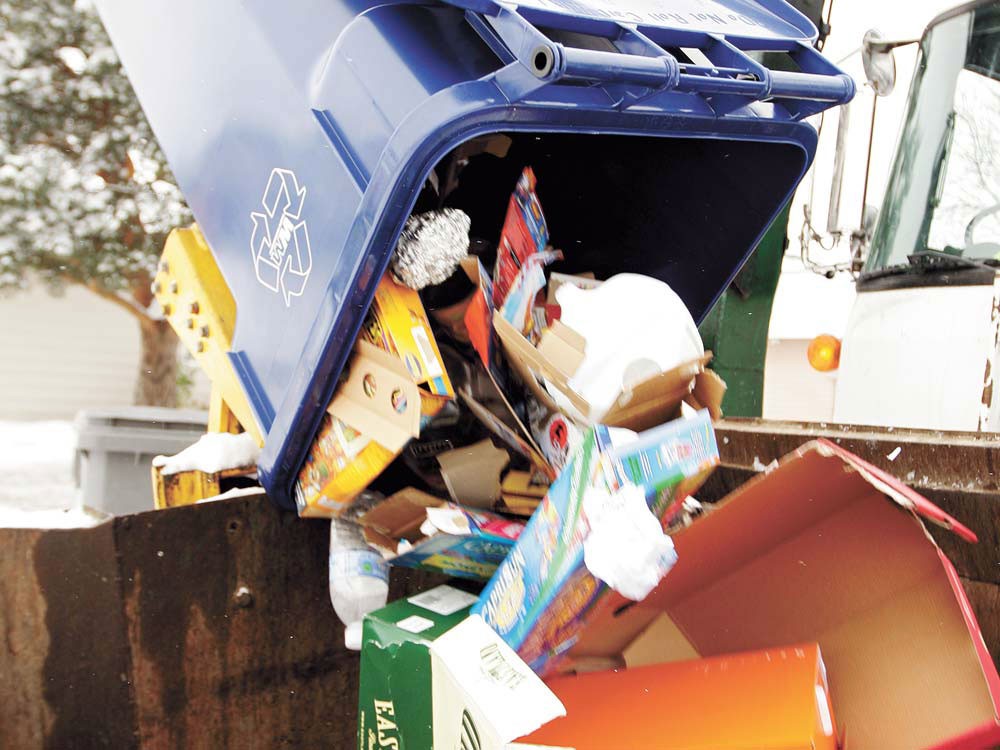 Pop quiz: What was one of the first things to be sold on the international plastics market when Coeur d’Alene changed the way it recycles?

Yes, the bins. Poof. Gone. “We were flooded with bins. They all came through here,” says Steve Moon, plant manager for a local firm that sorts and sells Coeur d’Alene’s recyclables. The bins were sold in Canada, which has an active market for many kinds of recycled plastics, he adds.

In mid-October, Coeur d’Alene took a great leap forward into what is known as single-stream recycling, a program that more than doubles the kinds of household items taken for recycling. And it’s simple:

Everything is dumped into a collection cart that is sorted elsewhere.

The recycling programs locally have long used curbside sorting. Paper, aluminum, plastics are tossed into separate compartments in a specialized truck. Typically, the sorting is slow and limited by the number of compartments on the trucks.

With single-stream recycling, collection is not limited. Residents toss everything into a wheeled cart — just like a garbage cart, only blue — that is picked up by the same type of truck that collects your trash. The recyclables are taken to a sorting facility, where up to 16 kinds of items can be recovered and sold wherever there is a market. Presently, programs take about six kinds of recyclables.

“There is so much material coming in, it’s just amazing. Last week we were up to 240,000 pounds — more than double what we were doing before,” says Steve Roberge, Coeur d’Alene district manager for Waste Management.

The possibilities of single-stream recycling look so attractive that Waste Management announced earlier this year that it plans to build a sorting facility big enough to handle recyclables from here to Montana.

This was the tipping point, so to speak, for other solid waste collectors, such as the city of Spokane, to begin planning for single-stream. One of the drawbacks locally had been lack of a facility to sort the sheer tonnage of recyclables.

Single-stream recycling will be a reality in Spokane by the end of next year or early 2012, says Scott Windsor, director of the city’s Solid Waste Management Department.

And not a moment too soon, he says. “Our recycling trucks are about 10 years old. Usually they are replaced after eight,” he says. Now that Waste Management is building a sorting facility, Windsor has already budgeted for replacing the aging fleet of recycling trucks with more of the robotic-arm trucks that collect trash.

The same type of cart is used for trash and recyclables.

What’s driving the change to single-stream?

“Our company is an environmental solutions company — that’s what we’d like to be known as. Not just garbage,” he says. “It doesn’t make sense any more to pick up garbage and bury it in a hole. We want to divert it.”

One thing the world has in abundance is garbage, and the old solution of burying trash in landfills is becoming increasingly expensive as landfills, well, fill up.

It costs $450,000 to prepare and fill an acre with trash at Kootenai County’s Fighting Creek Landfill, and then another $190,000 to close it. Single-stream recycling is expected to reduce waste going to Fighting Creek by 30 to 50 percent.

“The benefit to the county is we are not running this to the landfill. That is a shared benefit to everybody when the landfill’s life is extended,” says Steve Wulf, principal planner for Kootenai County Solid Waste.

Even in Spokane, Windsor says, “The Waste-To-Energy plant has two burners and it processes 270,000 to 280,000 tons a year — it burns anything and everything.”

But the city still ships between 60,000 to 70,000 tons of trash to the Rabanco regional landfill near Goldendale, Wash.

“Anything we can divert as recycling … there will be savings,” Windsor says.

“My figures show we are up 166 percent from the blue-bin system,” says Wulf.

The new carts take 16 kinds of recyclables, Wulf says, including an expanded range of plastics and papers.

“We also ask people to stay away from [recycling] motor oil and pesticide containers,” Wulf says.

What stays out? Glass, all three Steves (Wulf, Roberge and Moon) say. There is no market for it, and Coeur d’Alene is not collecting it.

“One caveat I have for the people of Coeur d’Alene: It would be really great if they would keep their glass and their garbage out,” says Moon of Spokane Recycling. “We get diapers, we get electronic components, old printers, old you-name-its, old stereos and old spoiled food. The guys work hard enough without having to handle things that shouldn’t be there.”

Wulf says some hardcore homeowners think that if they put glass in the blue carts, someone down the line will find a way to recycle it.

Not so, says Moon. “It goes right into a dump.”

Confusion with food waste may arise from Spokane’s recent decision to accept some food scraps in the “clean and green” bins for composting. Food should not go into the blue carts.

WHERE IT COMES OUT

Everyone interviewed for this article noted the recycled commodities markets are volatile and unpredictable.

The nice thing about sorting out a wide array of items is that a strong market can support weaker ones.

“We follow the pricing monthly,” says Moon of Spokane Recycling. “It goes up and down, but it’s OK. It’s end-user driven: If not a lot of people are reading newspapers, then newsprint is down; if people aren’t buying a lot of Walmart or other big-box store packages, then cardboard is down.

“It follows the economy pretty closely,” he says.

Some markets are practically next door. Newspaper goes to the Inland Empire Paper mill in Millwood.

Three to five semi loads full of cardboard pull out of Spokane Recycling every day, bound for a customer in Oregon. Plastics often go to Canada and China, as more and more manufacturers around the world use recycled products, Moon says.

The company’s Coeur d’Alene plant, Bluebird Recycling, is being expanded and upgraded with new sorting machinery to handle the increased tonnage, Moon says.

Right now he has a crew of nine who handle the 10 to 12 tons a day shipped over from Coeur d’Alene. “It keeps us hopping.”

The new sorting machinery is pretty Rube Goldbergian, as Moon and the city of Spokane’s Windsor describe it.

“There are machines that optically sort stuff by color. There’s compressed air” to blow away lighter items, Windsor says.

“You’ve got angled belts where, as the material drops onto them, the heavier parts roll downhill into conveyors that carry them off,” Moon adds.

The idea behind all these shaking and whizzing belts is to turn something old into something new and try to find less offensive ways to deal with waste.

“I do think it is a growth industry … and single-stream makes it a lot easier. As people understand it more, I hope they utilize it to the max. It’s good for them and it’s good for the environment,” Moon says.