A half-hearted retread of the original.

The blandly slapdash title My Big Fat Greek Wedding 2 is, alas, rather apropos:

this is a halfhearted retread of the imperfect but sweet 2002 original that mostly rewinds the characters in an apparent attempt to recapture the magic of the first film by having them rewalk a similar path.

Toula (Nia Vardalos), the clear heroine of the first movie, but only the putative one here, is back working at her father's diner after having achieved her escape back in 2002, and she's feeling stuck again. She's still happily married to Ian (John Corbett), though, and at first it seems that perhaps her journey this time will come in reconnecting with her 16-year-old daughter, Paris (Elena Kampouris), the usual sort of sullen, moody, monosyllabic teen we might expect. And who can blame her? Paris is already being subjected to her grandfather's denigrations that she's looking old, just as her mother once was, and had better find a Greek boyfriend to marry posthaste. But even this retreading quickly shifts away to how Toula is stuck in an unpleasant middle: between a child who is testing boundaries as she approaches adulthood, and her aging parents who require more attention and care.

These are issues that many women in their 40s will recognize, and a story about these challenges would likely appeal to the same audiences who saw themselves in the first film. But where's the wedding in that? So Wedding 2 shifts again to focus on a rift between Toula's parents, Gus (Michael Constantine) and Maria (Lainie Kazan): Gus discovers a clerical oversight on their marriage certificate and figures they have to get married again. Wedding-prep shenanigans were only a small part of the first movie, but they overwhelm the sequel, and this feels too much like countless other wedding rom-coms, all poofy dresses and fancy-invitation etiquette fails embellished with garish "Greek" froufrou.

There is genuine warmth in Vardalos' script (if of the exasperated kind) for the perils and pleasures of a too-close family, but it is far less satisfyingly bound up into a cohesive story this time. Director Kirk Jones previously made (among other films) the lovely but little-seen family drama Everybody's Fine in 2009. I wish he could have brought some of that film's keen observation of unconditional but hard-pressed love to this movie. That might have saved this shambolic mess from itself. ♦

My Big Fat Greek Wedding 2 is not showing in any theaters in the area. 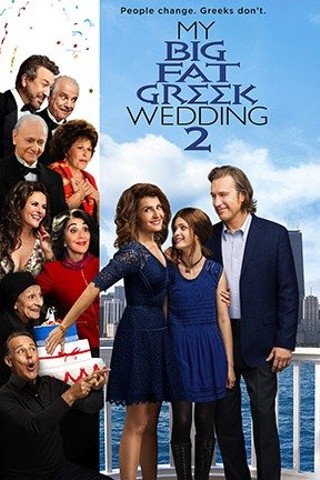