With major provisions of Trump's executive order put on temporary hold, 11 Iraqi refugees reunite with their families in Spokane 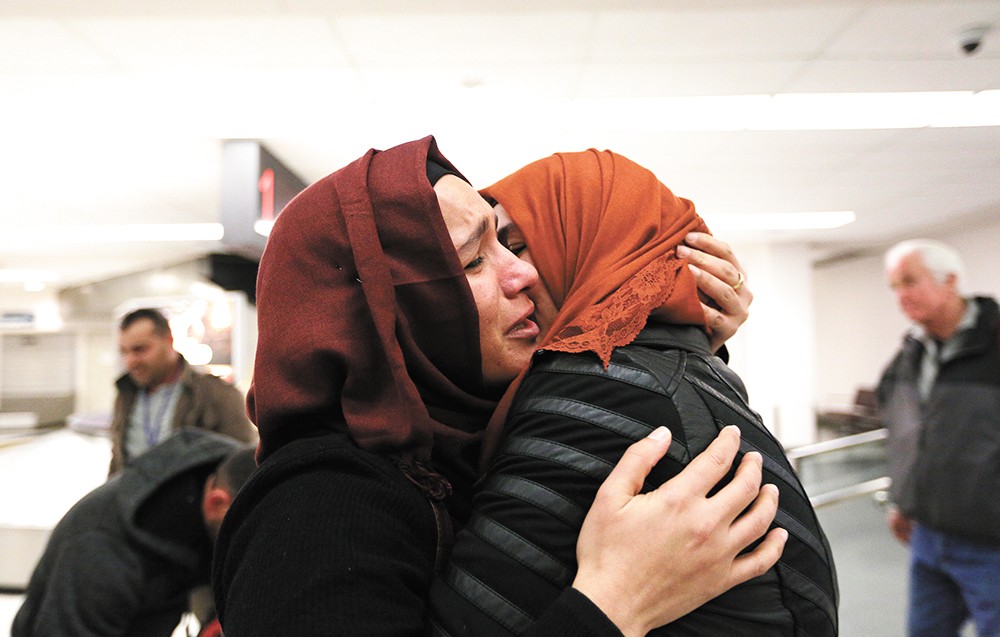 If President Donald Trump had gotten his way,

the events at Spokane International Airport on Saturday night would not have taken place.

A little more than a week earlier, Trump's executive order would have made it illegal for these three Iraqi families — 11 men, women and children — to even enter the United States.

But now, after Washington Attorney General Bob Ferguson convinced a federal judge to put Trump's travel ban on hold, Talib Baghdadi, a tall Iraqi linguistics professor, bends down to kiss his granddaughter Lina in the Spokane airport. He runs his hands through her long, curly black hair. It's been five years since the last time he and his wife have seen their children or grandchildren.

"At last! Reunited with my family!" Baghdadi says. "I have always been wishing to see the States, this greatest country. My dream has come true, at last."

Then there's Athraa Jameel, an Iraqi refugee who spent three years with her husband and children in a refugee camp in Turkey, packed with four other families into a house they couldn't afford to reliably heat.

Her sister Nadia came to America almost two years ago. Her cousin Asma got into America just before Trump's order slammed shut the door for refugees. Jameel and her family — booked on a flight for two weeks later — were too late. It looked like it would be months, maybe longer, before they'd have a chance again.

But now, Jameel and her husband and three children glide through the arrivals gate, greeted by a huge "Welcome to America" banner and an explosion of tears and laughter and hugs from Asma and Nadia and their children and friends.

This is what the pause on Trump's travel ban has meant for refugees: Not just safety and sanctuary, but reunion.

To any big brother with a little brother, the relationship between Hamid Nahi and Assad Al-Sawaedi will seem familiar.

As they grow up in a family of 15 in Baghdad, Nahi teases Al-Sawaedi, five years younger, by flicking his big ears. They get in little tussles and wrestling matches. They play Army Men: Sarge's Heroes on the PlayStation, and Nahi hogs the controller.

And then the Americans invade Iraq and everything changes. Nahi takes up arms — in favor of the Americans. He spends nearly a decade working with the Americans, first directly with U.S. Special Forces, then later working as a private security contractor protecting American forces. He learns to translate Arabic into English for soldiers. He learns how to scope out danger, to assess whether a dead sheep is just a dead sheep, or if the dead sheep has bottles of ball bearings and a chunk of C4 plastic explosive stitched inside its body.

In his mind, in his family's mind, he's working for the good of Iraq. To the militias that infest Baghdad, he's a traitor. Nahi raids a house in Najaf, 100 miles south of Baghdad, and finds his name on a hit list. Two of the men on the list have already been killed.

"They put a price on my head," Nahi says.

Al-Sawaedi is still at home with his parents as the threats against his brother trickle in.

Insurgents drop off envelopes, each containing a sniper rifle bullet and a crudely handwritten message: If Nahi doesn't stop working with the infidels, he'll get a bullet through his head. They spray-paint Nahi's name in Arabic on a dead dog and toss the corpse in front of his parents' house.

"I was so angry and so afraid at the same time," Al-Sawaedi says in Arabic. "We thought, even us, we will get shot one day."

Their dad dies in 2007 — not from being shot, but from a heart attack. Nahi blames the stress from all the threats and violence. He says the threats against his life mean that he can't even risk going to his dad's funeral.

As the Americans plan their withdrawal from Iraq, Nahi looks for a way out. He applies to be a refugee. The process is maddening. He'd been trusted with weapons to protect American civilians. He'd been given awards personally by Gen. David Petraeus. But still, it takes more than four years for his application to work its way through the refugee vetting process.

But finally, in December of 2012, he arrives in Spokane.

No question about it; life is better here.

After only two weeks in America, Nahi meets a woman. He falls in love with her, proposing that Valentine's Day. They have children. He gets a job working security in the STA Plaza. When a man gets stabbed at the plaza, Nahi rushes to provide CPR, trying to save the victim's life.

He moves into a house in the Spokane Valley suburbs. He parks his big white Ford truck with an Operation Iraqi Freedom and "Don't Tread On Me" bumper stickers in his driveway.

Back in Baghdad, Al-Sawaedi has two kids of his own. But in the vacuum left by the Americans' departure, Iraq slides into chaos and sectarian violence.

"There is no more freedom," Al-Sawaedi says, "It's like a jungle... You can't feel safe walking outside."

At the Baghdad high school where Al-Sawaedi teaches, even the parent-teacher conferences come paired with death threats. "Some of the parents, they would threaten to kill me if I don't give a [good] grade to their kids," he says.

A car bomb explodes across the street, and Al-Sawaedi and his mother stumble across the body parts of the victims.

The threats intensify, as militia groups harass his family by slashing power lines to their house. In 2013, Nahi applies for his mother and his little brother's family to come to America. His mother, a 64-year-old woman named Sabeeha, finally arrives last July.

Trump is elected in November.

Al-Sawaedi and his family have their bags packed, ready to fly out on Jan. 29. Trump's executive order — banning refugees for 120 days and any foreign travelers from Iraq and six other countries for 90 days — hits on Jan. 27.

"I literally passed out," Al-Sawaedi says. "I felt the whole world closing up on me. My heart stopped."

When Nahi hears about the ban, he parks his STA patrol car in the parking lot and weeps. "That was the saddest moment of my life," he says.

Nahi lies to his 5-year-old niece Rahaf, telling her that her ticket was lost somehow. They'll find the ticket, he says, and if they can't, they'll buy another one. But Rahaf isn't comforted. She wants to play with her 2-year-old cousin Rya in the snow, and is worried that it will melt before they can arrive.

Nahi does what little he can do. He and several refugee advocates make a plea directly to U.S. Rep. Cathy McMorris Rodgers. He talks for hours with her Spokane office staff, laying out his entire story, asking if she, somehow, can pull strings to get his brother here. McMorris Rodgers' staff reaches out to the State Department to inquire about the status of Nahi's brother.

Meanwhile, Ferguson launches a full-scale legal assault against Trump's executive order. Within a few days, a federal district court judge in Seattle temporarily puts the travel-ban provisions of the executive order on hold. The stay is affirmed by the Ninth Circuit Court of Appeals.

"Our legal system is broken!" he writes, furious about the large number of refugees coming from Iraq and the six other Muslim-majority countries singled out in his executive order. "SO DANGEROUS!" 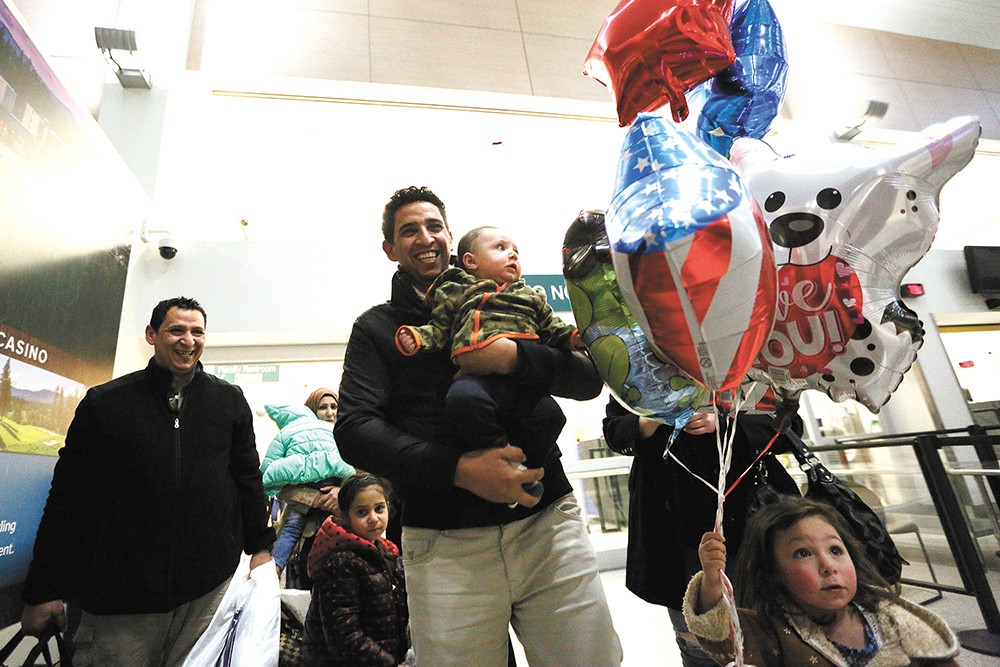 The flight arrives early, so Nahi almost misses the moment. But as Al-Sawaedi walks through the gate with his family, Nahi is waiting, beaming. His mother Sabeeha is there too, carrying huge stuffed animals and a bouquet of heart and American-flag balloons.

Nahi says that he doesn't like to show emotion, but here he can't help it.

"The moment was tearing me up, in a good way," Nahi says. "I want to dance. I want to scream."

Nahi holds his niece Rahaf in his arms for the first time since she was an infant. He lays a flurry of kisses upon Al-Sawaedi's 2-year-old daughter.

The brothers hold hands as they walk down to the baggage claim. They take selfies. There are plans to eat steak, and potatoes and s'mores. Nahi jokes with Al-Sawaedi about how he used to tease him about his big ears, and Al-Sawaedi laughs and thumbs Nahi's big nose.

"I felt, myself, like I was chained up, and all these chains just broke when I got here," Al-Sawaedi says.

On Sunday, Rahaf gets to play outside in the snow with Rya, just as she had dreamed. At a Rally With Refugees event at Gonzaga, the news of the arrival of Al-Sawaedi, Baghdadi and Jameel and their families draws thunderous applause and cheers from a crowd of more than a thousand.

It's Monday morning. Al-Sawaedi and Nahi's family have gathered in the living room of Nahi's house. The kids are watching Minions on Netflix. Al-Sawaedi is wearing an Old Navy shirt with a huge American flag.

It's a happy moment, but it's not a happy ending. At least not yet. Their oldest brother, Ali, calls Al-Sawaedi on Facetime from Baghdad.

Sabeeha, their mother, holds up three fingers. Three sons. She still has three of her sons in Iraq. Al-Sawaedi wants to apply for these other family members to come to America as well. But he knows how tough it will be. He knows that even if their application is accepted, even if Trump doesn't crack down further on Iraqi refugees, it could be years before the rest of his family arrives. But, as always, he's hopeful.

"They are survivors," Nahi says. "They will survive just so they can get here to the land of peace and freedom. So they can get that clean air, so they don't have to breathe that dust." ♦