Beset by budget cuts, the MAC scores one of its biggest exhibits ever.

Leonardo da Vinci’s batwing-like glider was designed to allow a single person to fly under his own power, yet it’s the power of teamwork (and a rented boom lift) that helped hoist the 18-foot model into Museum of Arts and Culture airspace. Like the other 60 inventions featured in “Leonardo da Vinci: Man-Inventor-Genius,” the glider was assembled from da Vinci’s 15th century diagrams and constructed using materials — cotton, wood, rope — he himself would have used.

For museum-goers, the glider is an elegant symbol of what happens when art and science combine. For the team who brought “da Vinci” to Spokane, the glider is the culmination of more than a year’s work.

“When I think of the across-the-ranks staff effort that has gone into the ‘da Vinci’ project,” says Ryan Hardesty, exhibits preparator, “it is astounding.”

Hardesty has had da Vinci on his mind since he took a trip last summer to Fort Worth, Texas. He had already gotten word that the MAC was going to host “da Vinci,” but there he got to see how the Museum of Science and History handled the traveling exhibit, which is promoted by a Minnesota exhibit group and an Austrian events company. 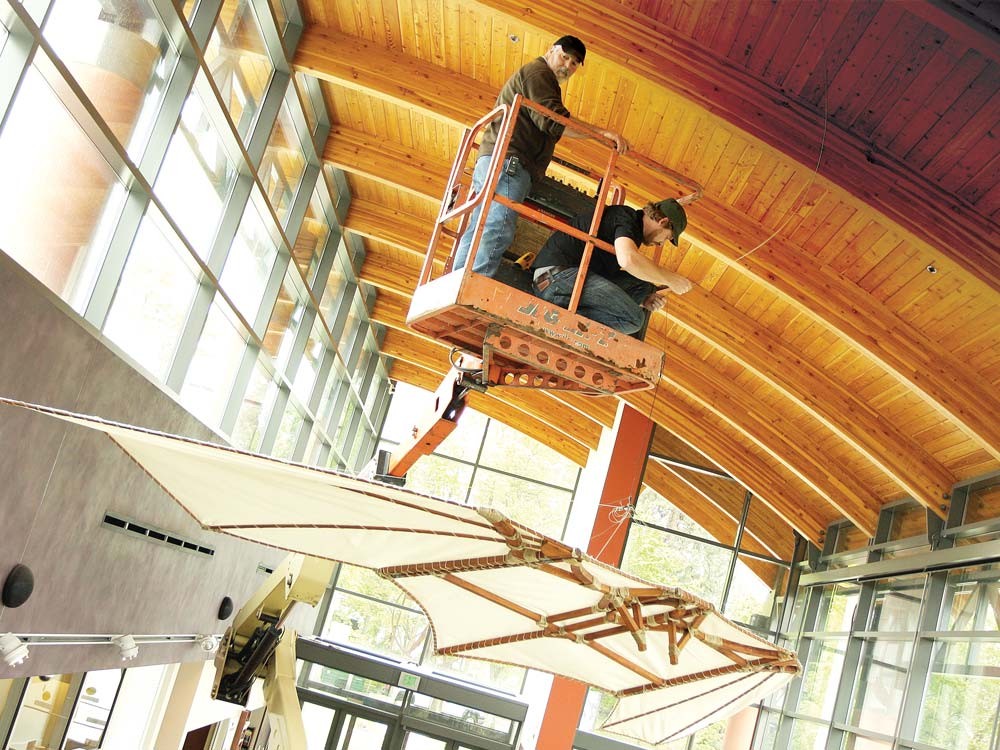 He discovered that the blockbuster exhibit requires 7,000-10,000 square feet of space, especially if both the Genius and Artist portions of the exhibit are purchased. That would mean that all five of the MAC’s galleries would have to be cleared, including the long-running “Spokane Timeline: Personal Voices” space (that exhibit has been converted into a mini-theater, surrounded by a 30-foot timeline of da Vinci’s life).

Ordinarily exhibits are installed independently of each other, not all five within a three-month span. “That’s a lot of artifacts and exhibitry to handle,” says Hardesty, whose team has worked since March to break down the museum’s existing shows; paint several galleries in rich, classic earthtones; reconfigure every light fixture; make signage; and coordinate the logistics of 10,000 pounds of new exhibit material. Even the entrance got the da Vinci treatment, with a custom steel cutout of “Vitruvian Man” by local artist Mason McCuddin.

In May — as the MAC’s Facebook page announced, “Here comes Leo!” — two semitrailers full of crates arrived. Some of the packages were so large they barely fit into the MAC’s 11-by-11 service elevator. Inside were 60 replications of da Vinci inventions, some assembly required. Although no instruction manuals were included (would they have been in Italian, we wonder?), the promoter did fly two installers to Spokane to assist with the exhibition.

Still, the installation hasn’t been without a few “uh-oh” moments. The replica of “The Last Supper” was rolled up when it arrived, explains Hardesty, without any kind of framework on which to hang it flat. “So we basically had to build a 16 [foot]-by-29 [foot] stretcher on the fly.”

Including “The Last Supper,” the exhibit features 23 replicas of da Vinci’s art. There’s “Virgin of the Rocks,” “St. Jerome” and, of course, “Mona Lisa,” perhaps the most famous painting by da Vinci or any other artist. (See “It Girl” sidebar on p. 29.) 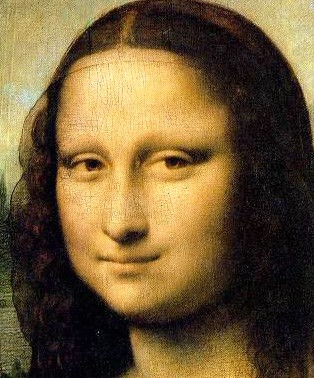 She’s the most recognizable girl ever, the red-hot mama of the Renaissance, and the image most closely identified with Leonardo da Vinci. She’s “Mona Lisa.”

The star of “Who’s That Girl?,” an informative, tongue-in-cheek exhibit created specially to accompany “da Vinci,” Mona Lisa is a conundrum. On one hand, she is a masterful example of the Renaissance technique sfumato, which allows for exceptionally subtle blending through translucent layers of paint. The composition of the painting, its fantastical background and evocative aura were all so novel in the early 1500s that it set a new standard for portrait painting.

On the other hand, Mona Lisa is also so deeply engrained in our culture that she’s become kitsch. That started in earnest in the 1700s, when she became a favorite of artists to copy. (There exist around 500 “decent” copies of “Mona Lisa,” according to the exhibition literature.) Contemporary artists, however, didn’t stop at copying the painting; they viewed her as an icon of culture, an image to be appropriated, as Andy Warhol did in an unfinished print included in “Who’s That Girl?”

In re-appropriating Mona Lisa’s image, successive generations of artists both built her up and trivialized her, and digital technology has only exacerbated the paradox. MAC staff just had to Google her to get several items for display in the exhibit: Mona Lisa pajamas, iPod cover, coffee mug, necktie. Another web search garnered a YouTube video of a time-lapsed digital Mona made using MS Paint, included not for instructional purposes but rather to address the way in which a 500-year-old image has remained relevant even in a virtual world.

Ultimately the exhibit asks us to re-examine our own roles as consumers of images, at the same time reinforcing the supremacy of Mona Lisa as the original “It Girl.”

The exhibit signage incorporates images from da Vinci’s roughly 6,000 notebook pages. Senior Curator of Art Ben Mitchell says some scholars estimate that that number represents only a quarter of the documents he produced. The notebooks are really essential to understanding da Vinci, Mitchell explains, because they illustrate how deeply rooted da Vinci’s scientific process was in art.

Art and science then were not mutually exclusive, as they can be for some modern audiences, and the genius of da Vinci is how courageously he explored any and all subjects that interested him. Water, air, plants, birds, sounds, machines, motion, fire, the human body. He was intensely motivated to understand how things worked, and why.

His notebooks are the physical manifestation of that curiosity, and although none of his actual documents could be secured for the MAC exhibit, the enlargements really bring his drawings to life. Over the centuries, scholars have grouped the notebooks into codices, four of which are represented in the exhibit: flight, civil machines, hydraulics/engineering (mechanics) and military machines. That da Vinci would have invented so many of the latter (the forerunner to the machine gun, the tank) is a product of the times in which he lived. This, notes Mitchell, is important context, which the MAC has added to enhance viewer’s understanding of da Vinci.

“Every institution will put a slightly different thumbprint on a project,” says Hardesty. “Just to scratch the surface, we built rustic wood carts to be used by our teen docents who will interface with the gallery visitors, added a mini-Mona Lisa exhibit, brought in two films and added various working models to the show, including a working catapult.”

Making the exhibit relevant to the audience and providing educational opportunities were the upsides to the “calculated risk” that Executive Director Ron Rector says the MAC took by bringing “da Vinci” to Spokane.

Like others at the MAC, Rector’s relationship with da Vinci began more than a year ago, when he approached a focus group of prominent business leaders and asked what kind of exhibition would best serve Spokane. “Napoleon” would appeal to community interest in history and the military, they said, while an exhibit combining art and ecology would appeal to science- and art-lovers. But “da Vinci” won out.

Not only did the exhibition do well at science and history museums in Seattle, Fort Worth and Chicago, “da Vinci” was a complete package, and Rector was confident he could find sponsors to underwrite startup costs. The Kalispel tribe is the presenting sponsor, and numerous others have stepped up to provide a wide range of support.

Will it be enough to secure the MAC’s future? Rector isn’t sure, but he thinks it will help. He credits the recent “Save the MAC” letter-writing campaign with swaying legislators, who temporarily diverted funding for a Westside Heritage Museum to support the MAC. And last week, in the provisional budget agreement struck in Olympia, the MAC received $3 million for the coming biennium — enough to keep the museum open, but still a 5 percent cut from the museum’s current funding level.

At least for the moment, the MAC is poised for flight, suspended like da Vinci’s glider, yet still tied to the community. For supporters of the MAC and the MAC itself, the glider is symbolic of how good ideas — like supporting our arts and culture organizations — endure the test of time.

“The biggest thing that’s happened, and this includes ‘da Vinci,’” said Rector, “is the community — Spokane and even Coeur d’Alene — has gotten behind the MAC and let our legislators know how important it is.”

The “da Vinci” exhibit at the MAC lets you get hands-on with the famous painter and his work. Try painting with egg tempera versus oil, experiencing the superior blendability of oil that distinguished da Vinci from other artists. Or see if size really matters; use Fibonacci gauges to determine “golden ratios,” much like da Vinci did in his “Vitruvian Man” drawing.

But don’t worry if you get in over your head as you explore the 23 artist reproductions, 60 inventions and other museum displays: Help is readily available.

The MAC’s new interpreter program, an updated version of the traditional docent or museum guide, offers the services of adult interpreters as well as local teens manning activity carts.

Ginger Ewing, the museum’s curator for cultural literacy, helped develop the Welty Teen Docent program, also known as Teen Interpreters, made possible by Dr. Elizabeth Welty, one of the area’s first female physicians and a longtime philanthropist and MAC supporter. Fifty area students ages 14-18 applied for the position. Twenty-eight were brought on and given three months in training in da Vinci content and customer service. Throughout the summer, Ewing says, they’ll work three-hour shifts, capitalizing on the social nature of museums, which in return provides the students valuable life experiences and job skills.

Whereas Teen Interpreters are limited to the activity carts, adult interpreters will simply be available throughout the exhibition as needed. “What we’ve tried to do is equip the interpreter with the knowledge and the skills to interact with the visitor in a way that is always visitor-centered and not necessarily about spewing a ton of information,” Ewing says.

Another way the MAC is connecting with the community is through kids camps. Summer activities for children ages 6-11 include the one- and two-day Camp da Vinci ($50-55, $75-85) and the three-day Mobius Kids Camp ($85-100). Robots, flying machines, catapults, making your own paint. Who knew learning could be so much fun?

While some activities introduce new audiences to da Vinci, others broaden an already appreciative audience’s understanding of the Renaissance master. For example, did you know da Vinci wrote music? You can hear it playing in the background of the main “Mechanics” gallery, or attend one of several performances, like Donivan Johnson’s Man and Music in a Distant Mirror. (Sunday, June 26, 3 pm, MAC’s Eric Johnson Auditorium, suggested donation $8.)

Da Vinci’s work raises a lot of questions, so it helps to fully understand the historical context in which he worked. How did Italian politics relate to his abundance of military inventions, for example? Or how did his spiritual beliefs fit into the larger Renaissance movement towards secular humanism? Who better to address these topics than the brilliant scholars from nearby Gonzaga, with free lectures July 17 and 24. (3 pm, MAC’s Eric Johnson Auditorium, suggested donation $8)

Finally, all ages will enjoy Leonardo da Vinci: The Man Who Wanted to Know Everything (date and location TBA), a documentary produced by the BBC. It highlights da Vinci’s notebooks and his fascination with nature (particularly flight), and it provides an opportunity to rest your feet and contemplate the genius that was Leonardo da Vinci.