REVIEW: Les Misérables is a classic for a reason… 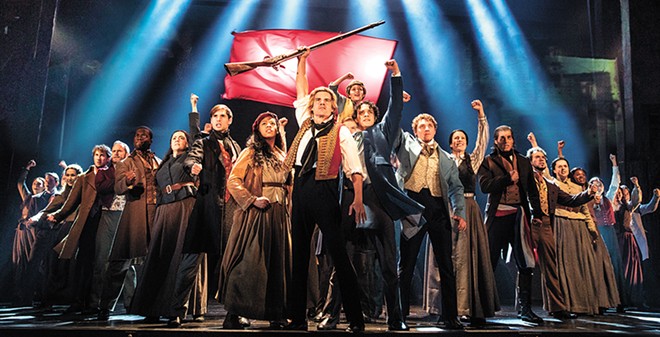 
“For most people, the first time they see Les Misérables is an unforgettable

In last week’s Inlander this is what I wrote to open a story about the cultural impact of the musical phenomenon Les Mis.

At the time, my writing was based on what people told me about the musical because I had never seen it.

Well, I finally saw it on Tuesday at the opening night of its week of shows with Spokane’s Best of Broadway and I can confirm: The first time you see Les Mis is indeed an unforgettable experience.

I had a hunch I’d enjoy the production simply because I’m a massive musical theater fan. However, I did not expect to love it so much.

This musical is beautiful. Its themes are universal and there is a story for everyone — from a cat and mouse chase, to a love triangle, to a redemption story, and much more.

The highest hurdle to jump with this production is that it is all music. There is no break in the singing, which can be overwhelming. However, my ears adapted quickly and I was able to understand the plot and dialogue even though it is communicated exclusively through song.

For me, the best moments in the show align with what most say about it. Seeing the red flag fly during “One Day More” was so powerful and I was overwhelmed with emotion at the end of the song.

The female leads were phenomenal. Being able to hear “I Dreamed a Dream,” performed by Mary Kate Moore, and “On My Own,” performed by Paige Smallwood, was moving and had many people in the audience in tears.

The other two performances that stood out to me were Nick Cartell, who plays Jean Valjean, and Jasper Davenport, who plays Gavroche. Cartell’s voice is angelic and he brought so much dimension to Valjean. Davenport was a true scene stealer and was unbelievably charismatic.

Overall, seeing Les Mis was a wonderful experience and I would see it again in a heartbeat. If you’re into musical theater this classic is a must-see.

Les Mis will be in Spokane through Aug. 11 at the First Interstate Center for the Arts and tickets can be purchased at broadwayspokane.com or 800-325-7328.