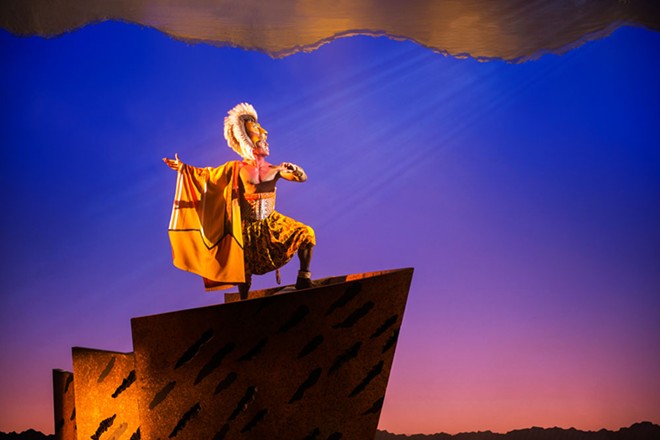 As The Lion King opens and a slew of African animals converge on Pride Rock, one can only imagine what audiences thought 22 years ago when the musical reworking of Disney's animated hit movie first landed on stage.

So incredible is the puppetry, so stunning are the costumes, so stirring is the music and choreography that those audiences must have been utterly blown away by what they were seeing.

The impact is no less in 2019 judging by Thursday night's performance of The Lion King at the First Interstate Center. Even after thousands of performances across the globe, and even knowing about the show's Tony Awards and pioneering stagecraft, watching the parade of elephants and birds and gazelles and their friends from the African Savanna roam down the aisles of the FIC toward the stage, gathering around Rafiki (Buyi Rama) to open the show while singing "Circle of Life" remains an incredible experience.

If you have the opportunity to grab one of the scattered tickets remaining available for the Spokane run through Feb. 3, do it. Sure, you know the story, but watching it created on stage is an experience worth having if you can swing it.

After the initial gathering of animals at Pride Rock, we meet the main characters of this tale of family, loyalty and bravery. Mufasa (Gerald Ramsey) is showing his young son Simba (Richard Phillips Jr.) the ropes of life while Mufasa's brother Scar (Spencer Plachy) bemoans his lot in life to never be king. Unless...

Plachy is delicious as Scar, delivering his lines with a nefarious sneer as he sends young Simba off to the dangerous Elephant Graveyard where a nasty crew of hyenas await. While Mufasa is able to save Simba from danger, he can't save himself, and Scar decides to kill Simba so he can ascend to the throne.

Things don't go as planned for Scar, as adult Simba (Jared Dixon) exiles himself over the guilt of his father's death before he befriends a meerkat and warthog and eventually returns to Pride Rock for a triumphant finale.

Over the course of its two and a half hours, The Lion King's visual wonders never stop. I repeatedly caught myself staring at some creature or another and wondering how they designed such incredible costumes and puppets. Some are so simple, while others seem incredible feats of engineering.

Between the stagecraft, songs by Tim Rice and Elton John and the story of a young lion's path to adulthood, it's easy to see why The Lion King retains its grip on theater audiences.