Joan Marcus
Mean Girls on the live stage even outdoes the movie for fun.

I absolutely adore musical theater, but if I’m being honest, musical adaptations of movies can be a bit hit or miss. I am happy to report that the musical version of Mean Girls, based on the cult classic 2004 movie, was even more fun than the movie itself.

The show opens with Damian (Eric Huffman) and Janis (Mary Kate Morrissey) narrating to the audience that the show is “A Cautionary Tale,” but the banter between Damian’s over-the-top sunny personality and Janis’ lovable cynicism clues us in that this particular musical knows it isn’t meant to be taken too seriously. In Mean Girls, our protagonist, Cady Heron (Danielle Wade), moves to Illinois from Africa and she is initially excited to go to high school in the U.S.. However, Cady quickly discovers that it isn’t as easy to find friends as she thought.

Cady befriends Janis and Damian, who show her the ropes of North Shore High, complete with a dance number in which the ensemble uses their lunch tray props to make the beat (“Where Do You Belong?”). Although Janis and Damian take Cady under their wings, resident queen bee Regina George (Nadina Hassan) has the same idea. After the audience is introduced to Regina and her posse, including Gretchen (Megan Masako Haley) and Karen (Jonalyn Saxer), in a song that bathes the whole stage in pink light (“Meet the Plastics”), we join the rest of the school in its simultaneous fear and awe of the group.

Cady, Janis and Damian quickly formulate a plan to take down Regina George, framing it as a way to get back at her for hurting people in the past (“Revenge Party”). However, their plan is complicated by Cady’s feelings for Regina’s ex-boyfriend, Aaron (Adante Carter) and the way Cady slowly begins to lose sight of herself as she becomes more involved with the plastics.

From the way the musical gives the Mean Girls characters some added complexity, to the powerhouse vocals of Hassan and Morrissey as Regina and Janis, to the way the scenes impeccably transitioned from one to the next — complete with traditional high-school desks on wheels — Mean Girls was a treat. 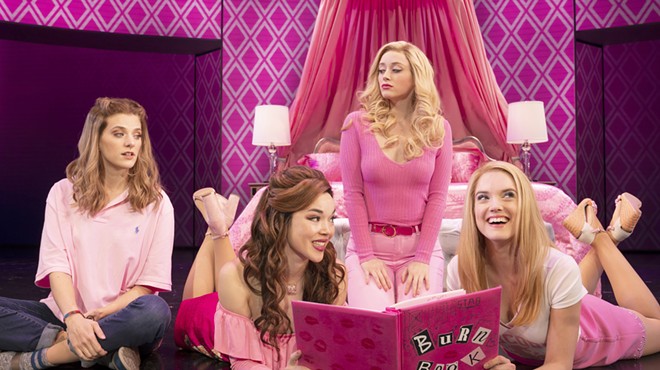 
It’s one of those musicals that you don’t have to think too hard about, although the social commentary peppered throughout the show, mostly from the witty duo of Janis and Damian, makes for an added bonus that calls into question what the musical’s objective really is.

Going into Mean Girls I already knew quite a few of the songs from the show, being the former theater kid that I am, and seeing them come to life on stage was even better than I expected. Audiences are in for some fun with “Sexy,” Karen’s moment to shine when she sings about dressing how you want on Halloween. “World Burn” will give you chills in the best way possible as you watch Regina plot her comeback, and “I’d Rather Be Me” is the perfect mix of sass and badass that encapsulates Janis’s character and her frustrations with how the girls at the school are acting.

On top of the cast’s all-around vocal prowess, there are impressive dance numbers (including a show-stopping tap dance routine) that bring extra energy to the stage, complete with peppy costumes and a backdrop that quickly morphs into the many different settings throughout the show. Mean Girls also sticks to the plot of the movie fairly accurately, but if you love musicals as much as I do, the catchy songs, snarky comments that will have the whole audience laughing, and just how much fun it is to watch the Mean Girls characters come to life on stage makes this musical very “fetch.”

Mean Girls is at the First Interstate Center for the Arts through Nov 28.