Rod Spicer photo
Vanessa Williams
People attending the Spokane Symphony's annual Holiday Pops show Sunday afternoon were treated to an event that was a little heavier on the "pops" than the "holiday."

I, for one, was glad about that.

Partly, that's because three days before Christmas, most of us have heard our fill of the Christmas classics. And partly it was because the guest vocalist, Vanessa Williams, arrived with a deep catalog of R&B hits, Broadway experience, and a killer five-piece band of her own, capable of delving into everything from funk to jazz, rock to pop.

Besides, the Spokane Symphony and its new music director James Lowe were on hand, with an assist from the Spokane Chorale, to start the show with about 40 minutes of nonstop holiday fare. Even there, though, Lowe and company eschewed the expected for some pleasing off-the-beaten-path works, including the prelude from the German opera Hansel & Gretel and a lengthy piece by British composer Gerald Finzi, "In Terra Pax."

Santa dropped by to lead the audience through a rapid-fire medley of carols before Williams took the stage, and the singer/actress easily took the spotlight from the jolly dude with a jaunty version of "I Never Has Seen Snow" from the musical House of Flowers. It was an interesting and unexpected choice and proved a harbinger of a set full of such treats by Williams and her band.
In bouncing between familiar songs given a funky new kick like "The Little Drummer Boy," her own pop hits like "Dreamin'" and jazzy takes on songs like "I Love the Winter Weather," what became clear is that Williams has serious pipes.

Dan Nailen photo
Vanessa Williams has serious pipes.
It's no surprise Williams shined on Broadway as well as radio, and she grooved and moved to the music in ways you typically see at staid, boring holiday concerts.

Williams delivered her Oscar-winning tune from Pocahantas, "Colors of the Wind," and you know she did No. 1 hit "Save the Best For Last" as well as her Brian McKnight duet "Love Is." Throughout, the symphony melded easily with everything from her ballads to her funkier numbers. By the time she shut it down with an encore of an energetic, island-flavored R&B tune "Betcha Never," I walked away pleased at a surprisingly diverse show for something labeled a holiday concert. 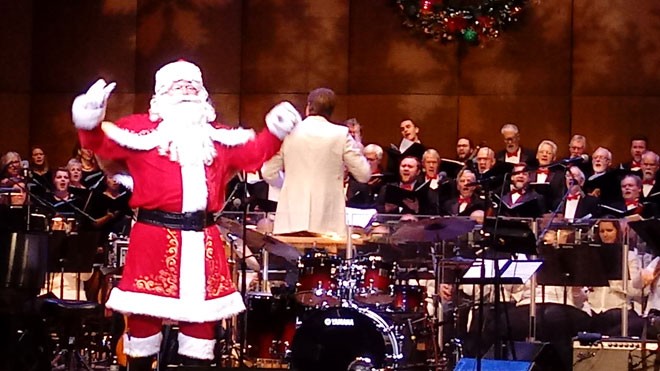 Dan Nailen photo
Santa led the audience in some carols before Vanessa Williams took the stage.