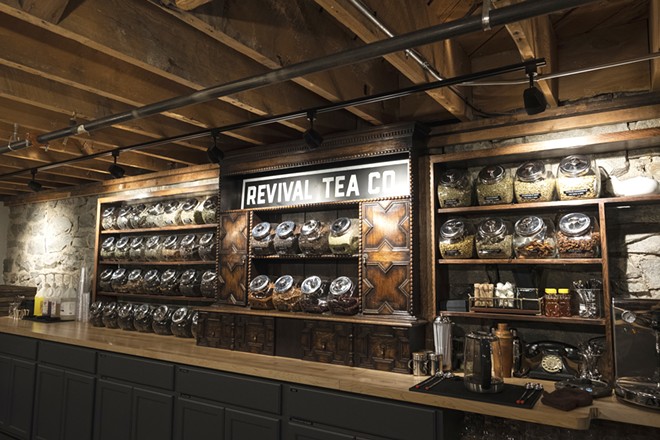 Hector Aizon photo
Revival Tea is located in the basement of a historic downtown building.
Drew and Cerina Henry had never considered themselves tea lovers.

Sure, they were drinking three to five cups a day, but the Spokane couple had their eyes set on opening up a distillery in town. They’d been traveling back and forth to Ireland to research distilleries and then had an epiphany.

“We realized that we drink way more tea than whiskey,” Drew Henry says. “But tea is not sexy, even though it’s the number two drink behind water. So we were like ‘Oh my gosh, what if we took what we know from whiskey and put it into tea.’”

In 2018, the couple launched Revival Tea Company as an online venture, exclusively selling their signature spiced chai blend. Within the first 90 days, they say, they’d shipped their chai to 24 countries and almost every state. They next launched a Kickstarter campaign to attract more attention, raising about $5,000. The money raised was used for preorders, allowing the company to distribute its first wave of chai tea.

“Word spread like wildfire because when people get a tea they like, they start to talk and tell their friends about it,” Henry says. “Our online business just exploded, so we said ‘OK, maybe this is something we’re going to have to jump on a little quicker.’”

Revival began selling its spiced chai at wholesale, which is now served at coffee shops across the Pacific Northwest. The chai is made of nine ingredients: black tea, cinnamon, ginger root, wild and raw flower honey, cloves, allspice, cardamom, fennel and black peppercorn. The honey adds more sweetness to their blend than most chais, creating a bolder and more complex tea, Henry explains.

Early this year, the local tea company began serving its chai alongside more than 30 other teas in a downtown, speakeasy-inspired tea room nestled between Durkin’s Liquor Bar and Sweet Peaks Ice Cream. The couple wanted a basement space to best match their brand’s vibe.

“The big thing is we want tea to be really approachable,” Henry says. “We want to make it a very accessible experience, as tea can be very overwhelming or even intimidating, and we don’t want it to be that way.”

The basement space wasn’t on the market when the Henrys were looking for a brick-and-mortar location, but Drew knew the owner of the building that was built in 1910 by Spokane liquor tycoon James “Jimmie” Durkin. During Prohibition, the main floor served as a soda fountain to front for the bar in the basement. The couple signed a 15-year lease as their way of showing that Revival Tea is here to stay.

While the COVID-19 pandemic threw a major obstacle in the tea shop’s way just weeks after their February opening, Henry says Revival Tea’s roots as an online retailer was a boon for sales during the shutdown. The downtown shop was able to remain open for to-go orders and local online pickup, and began offering free shipping on orders from non-local customers.

“During the shutdown, online sales just went completely insane,” Henry says. “We used it as an opportunity to gain more customers, and just as soon as places could be open again we saw a sharp decline in online sales as people started to come in more.”

Overall, Henry estimates Revival Tea is seeing about half its projected sales volume had there not been a global pandemic, but “for us that is a lot better than the alternative; a lot of places are struggling and we’re not struggling.”

Just before the mid-March shutdown, the Henrys purchased a machine to bag their teas into individual servings, a process that before was done by hand and only for some of its tea blends. Now all of Revival’s teas are sold both in loose-leaf form and in single-serving bags.

“All of our teas come from the very small tea leaf at the top of the plant that’s called the flowery orange pekoe,” Henry says. “So, the higher you get, the more nutrients you get from the part of the plant. All of our tea comes from that.”

At Revival’s storefront, which is open to in-person service at half of its normal capacity and with many other public health guidelines in place, traditional tea is served by the cup ($3.50) or as tea service for two ($8.50). While wanting to focus on tea, the tearoom plans to also serve gluten-free muffins from the local Made with Love Bakery and Walker’s gluten-free shortbread cookies imported from Scotland. The spiced chai is also offered on nitro ($4.50), which Henry compares to the creaminess of Guinness beer.

Mocktails ($5) are also on the menu, like an Earl Grey old fashioned made with a bourbon extract, simple syrup, bitters, fresh orange peel and cinnamon. Happy hour is offered every night from 4-6 pm with tea mocktails for $2 off.

“People can come after work and if maybe they don’t want to drink, they can have fun, and have a cool place to conversate,” Henry says. “So we’re doing a lot more than just hot tea.”