If there was ever a glass ceiling in Spokane's music scene, Hotbox is breaking it. 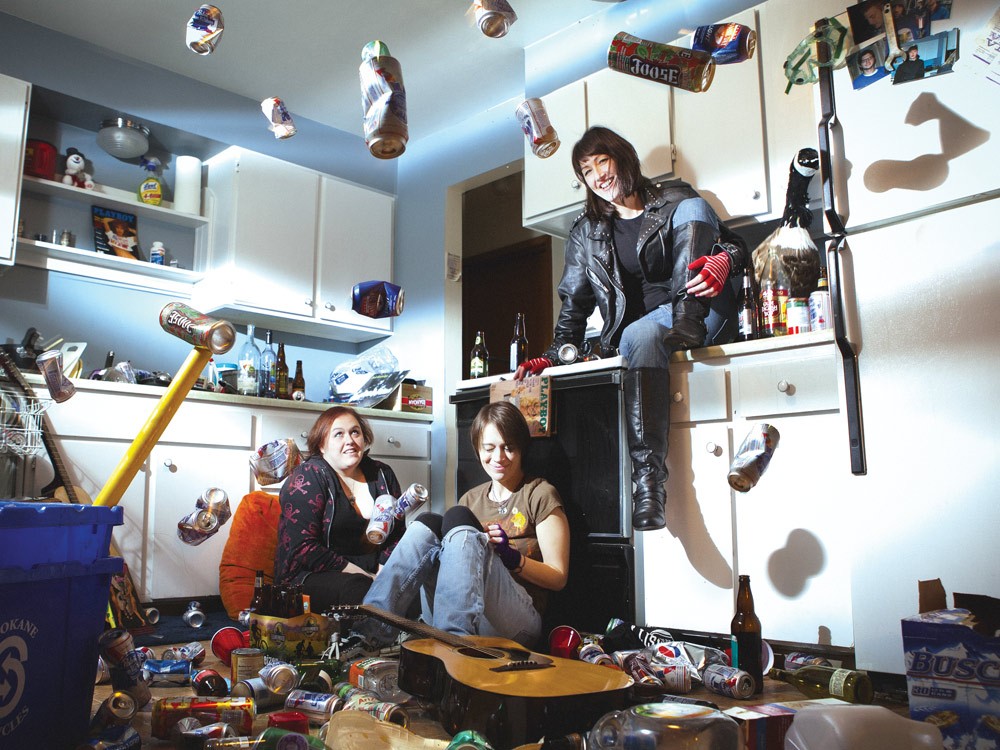 "Show us your hotbox!” a drunkard bellows from the pits of a seedy beer-stained bar in Spokane.

His blabbering about vaginas isn’t completely out of place, oddly. He happens to be yelling at the all female punk band on stage. They’re called Hotbox.

But the heckler doesn’t register with the band. Vulgarities like these are few and far-between. After all, they used to be called the Swallows — who is going to heckle that band?

“We used to stand up there and make people cringe with offensive, sexually driven shock rock,” Wilson says.

The Swallows sang about “beer pussy,” and sang “I can see your tits, who you f---ing tonight?” “With the songs we were singing, we were asking for it,” Wilson says. “Now we have the room and the floor to say something that has meaning.”

In Hotbox, they’ve turned the tables: “You can suck my d---,” “Girls, get your boots on, do the woman-beater stomp.”

The metamorphosis came about two years ago, when the three women parted ways with their lead singer, focused on their instruments, and, coincidentally, became Spokane’s only active all-female band. Instead of fighting to maintain a separate identity in Spokane’s male-dominated music scene, the women are simply trying to make music — uncompromising noise — without making it all about their sex.

There are boobs everywhere tonight. Gold-painted boob plaques hang on the walls at Mootsy’s, pink boobs in the painting of a naked woman sprawled out above the bar. The members of Hotbox step outside for a smoke, and then squish into a booth together.

All three seem a little embarrassed of their past musical indiscretions.

“Right now we’re just trying to let the music speak for itself,” says George, the self-proclaimed quiet one in the band. “We may not be the band that everyone likes, but we always draw a crowd.”

“I’ve actually been surprised by a lot of people. They come up to us and say, ‘Oh, I thought I was going to have to lie about how good you are, but I don’t have to.’” The band plays a fiery roller coaster of fast, jarring, playful punk songs. Their EP Less is More features songs like “All the Girls Say,” which is reminiscent of Le Tigre. “Woman Beater Stomp” pays homage to the Distillers.

Then there’s “Burn,” a track that appears to be a three-chord punk ditty until the chest cavity of the song rips open into a screaming, growling metal thrasher. George says each woman’s personality and taste in music adds a different element to their songwriting.

“We’ve created a very wide mold for ourselves,” George says. “We don’t want each song to sound exactly the same.”

“But I think people expect us to be a lot more angry than we are,” Wilson chimes in.

The three women are more different than they are alike. The 30-something-yearolds are mothers who work in youth shelters, as waitresses and as stay-at-home moms. What they do share is a love and appreciation for the Riot Grrl movement, an underground feminist punk movement that swept from Washington D.C. to the Pacific Northwest in the mid-1990s.

“We just have mad, mad, respect for those bands who did it first and paved the way for bands like us,” Wilson says.

But still, years after, Hotbox is still an anomaly in Spokane’s music scene. The aggression, emotion, and power they put out aren’t often seen from local female musicians. Hotbox recognizes the strange space that they occupy here, but they don’t feel slighted or alone.

“I’m just so excited to be living in a world where I can say ‘suck my d---’ and not get punished or stoned to death for it,” Wilson says. “In a way, I think it’s good that we still shock people — at least it’s an emotion, at least they’re feeling something.”

They say the stage is open for female bands, not just singer-songwriters, in Spokane.

“The platform is out there,” Vitro says. “As a woman, you might have to push a little harder to get on top of it, but it’s there if you’ve got something to say.

“We don’t want to be arrogant about it and say that we are Spokane’s only all-girl band, but is there anyone else around that that’s going to step up to the plate and push it?”