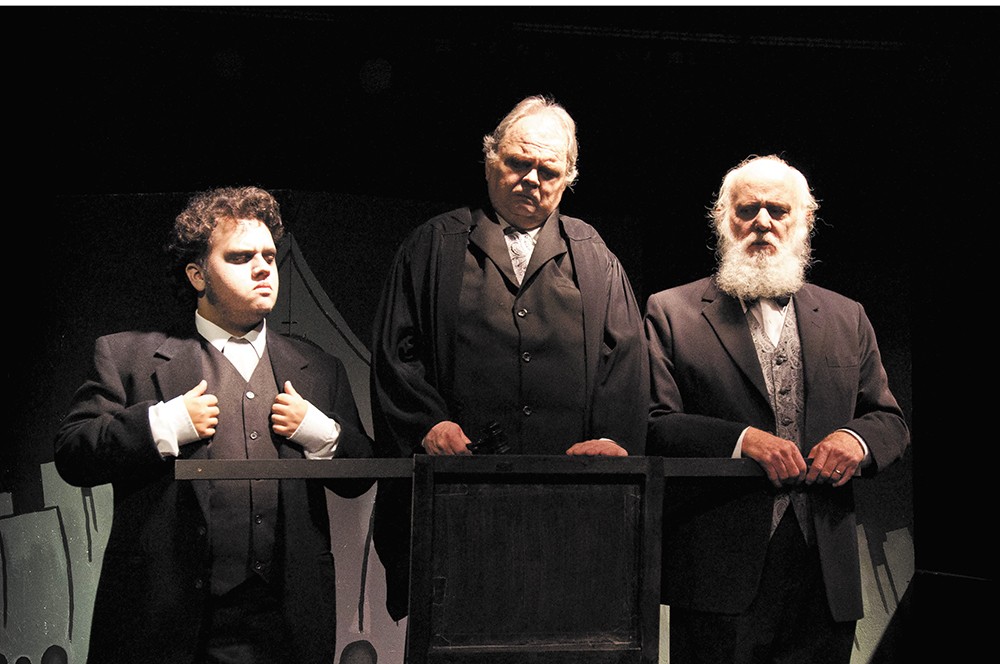 Before the ensemble members of Haymarket Eight gather onstage

to set its dramatic events in motion, four nooses can be seen dangling ominously overhead. They're a grim reminder, perhaps not altogether intentional (Stage Left's fly space isn't exactly roomy by any standards), of the punitive threats that loom over these late-19th-century labor activists and the fate of the men who will later be tried for the bomb that tears apart an otherwise peaceful rally in Chicago's Haymarket Square on May 4, 1886. The names of those eight men will be repeated in grave monotone throughout the play: August Spies, Albert Parsons, George Engel, Adolph Fischer, Louis Lingg, Michael Schwab, Oscar Neebe, Samuel Fielden.

The Eight of the play's title is significant not just for those called to trial but also for the cause that brought them together, the eight-hour workday. In the wake of the deadly Haymarket bombing, these men were vilified by even the "respectable" press as bloodthirsty agitators and scheming foreigners, though none, even by the prosecution's own admission, could be tied directly to the crime; and yet it was their advocacy that improved American labor conditions so that marathon work hours, at least for many, exist today out of choice rather than necessity. Haymarket Eight is therefore not a play about socialism or martyrdom, but about chronic injustice and the fear- and greed-based human tragicomedy that continues to play out despite all our claims to progress and sophistication.

Costumer Jean Bolkovatz has outfitted the nine-person ensemble in severe monochrome to match Roch Fautch's equally severe set, featuring little more than a hand-drawn backdrop of ghostlike silhouettes, warped buildings and a clock tower. The actors' faces are ashen, their eyes sunken with heavy shadowing. It's a muted palette of blacks and grays, reminiscent of the Civic's studio production of Dr. Jekyll and Mr. Hyde exactly one year ago, but without even the faintest glimpse of color — or, as it happens, hope. If bleak was the watchword during set and costume design, then those aspects of Haymarket Eight have certainly succeeded in being its consummate expression.

Director Christopher Lamb has also encouraged a similar kind of restraint among the actors, likely in pursuit of a suitably serious and somber tone. That has the unfortunate effect of making the emotional palette as subdued as its visual counterpart. The romantic relationship that develops between the German-born reporter (Luke Faser) and his love interest (Lauren Campbell) lacks enough passion to stand out among the rest of the events, and even the workers' rallies seem like knitting circles. As a result, the production never overcomes the stiff, cartoonish theatricality that is an inherent shortcoming of didactic plays like Haymarket Eight, and it fails to capture the ferocity of spirit that sustained these men and women through such oppressive times. Only Kelsey Weddle as Lucy Parsons comes close to conveying why her true-life character was considered a woman "more dangerous than a thousand rioters."♦