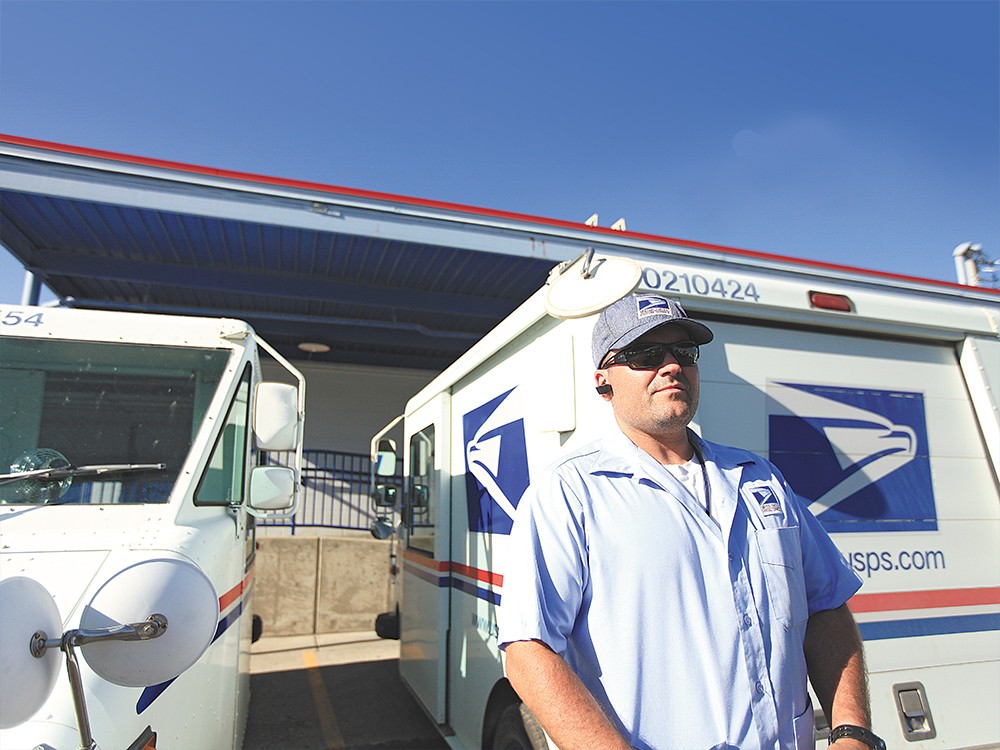 Local letter carrier Eric Pardick: "The risk is always there for us."

With their targets scrawled across them in red ink, five malevolent letters slipped into the U.S. Postal Service system in mid-May, falling in among millions of envelopes and packages shipped nationwide each day. Bound for the White House, the Central Intelligence Agency and three Spokane-area offices, each letter carried a crude form of the deadly poison called ricin.

At least two of the ricin-laced letters reached their local destinations while others were intercepted en route. Investigators have not reported any injuries, but the recent scare reinforces the often overlooked threats facing rank-and-file postal workers.

“The risk is always there for us,” local letter carrier Eric Pardick says. “We’re always aware of it.”

James F. Wilson, assistant inspector in charge of the Seattle Division of the U.S. Postal Inspection Service, says new technology and evolving threats have shifted how the agency investigates and prepares for postal attacks.

While the Spokane ricin letters have left some local workers shaken, two other similar ricin cases from earlier this year out of Texas and Mississippi prove dangerous mail remains a national concern.

“We live in an environment where we have to be a little more cautious,” Wilson says.

In the months following Sept. 11, 2001, five people died and many more fell ill from exposure to anthrax sent through the mail. Two postal employees were killed as letters crisscrossed the system, targeting politicians, media outlets and government officials.

Wilson says the U.S. Postal Inspection Service has always worked to keep postal employees and customers safe by investigating illegal shipments, fraud and other mail abuses. But the 2001 letters escalated how dangerous a disturbed and deliberate attacker could be.

“We take it very seriously,” he says.

Postal inspectors have introduced a number of new safeguards over the past decade to protect postal workers and customers. One of the most prominent measures is a Biohazard Detection System, which collects air samples from envelopes and tests for a variety of harmful substances.

As letters pass through pinch points in processing and sorting conveyor lines, the detection system compresses each envelope and samples the air puffed from the letter. The system sets off an alarm if a toxic substance is detected, which can trigger evacuations and follow-up testing with the National Bioforensic Analysis Center in Maryland.

The Spokane ricin letters would have passed through a Biohazard Detection System at the Spokane Processing and Distribution Center west of the city. Wilson could not offer details on how the system responded to the local letters, but investigators acknowledge multiple letters continued through to their destinations.

“There’s certain things the BDS can and can’t pick up,” Wilson says, adding only that the local system did work as it was calibrated to operate.

National officials earlier this month also confirmed the Postal Service photographs and logs every piece of mail processed through the system. Officials stressed they do not open any letters, which would require a warrant, but record all of the exterior address information into databases. The information is reportedly kept for as long as a month and can be accessed by law enforcement if requested.

Local postal employees also get training to watch for and recognize hazardous substances, keeping an eye out for unknown powder or leaky fluids. Workers receive additional training on spotting suspicious labeling such as excessive postage, vague return addresses or signs of deliberate deception.

Joe Stephenson, a team leader with the U.S. Postal Inspection Service in Seattle, says inspectors have learned a lot since 2001 as they have ramped up new mail protections and responded to a variety of new threats. He says the agency continuously works to examine its own protocols and its institutional safeguards.

“The mail’s safer than ever,” he says. “There are more measures now than there ever have been.”

The Spokane ricin letters hit close to home for Jack Talcott, local president of the American Postal Workers Union. One of the five letters was addressed to the downtown Spokane Post Office on Riverside Avenue, to a department where his union members typically open and sort the mail.

Talcott, who represents approximately 300 Spokane-area mail clerks and sorters, says the local attack was both surreal and unsettling. He says union members approached him with safety concerns and questions about security after the letters surfaced.

“It really was kind of an eye-opener,” he says. “Not just for myself, but for a lot of other employees as well.”

While he has enjoyed his 14 years with the Postal Service, Talcott says he has also watched security become more of an everyday concern throughout the system. Mail gets locked down. Work areas get closer monitoring. Training expands to include more emergency exercises and new terrorism scenarios.

“It has changed, honestly,” he says. “Since the anthrax exposures, the training has absolutely increased. ... I think it’s even part of the employee orientation.”

Talcott notes every Postal Service worker must pass a background check and their fingerprints get put on file. Most employees consider the sanctity of the mail and its speedy delivery their highest priority, but new safety concerns add to the challenges of the job.

Spokane letter carrier Pardick, who also serves as local president for the National Association of Letter Carriers, says the stress carries through to many everyday decisions. Postal workers must remain vigilant as they make their rounds, collecting mail and watching for any warning signs.

Pardick says workers regularly balance their duty to deliver the mail with the potential risk they might face. Does the address on this letter look fake? Is something toxic leaking from a package? When do they decide it’s too dangerous?

“It just makes us try to be a little more cautious,” he says.

Federal authorities arrested 38-year-old Matthew R. Buquet on May 22 in connection with the Spokane ricin letters after searching his apartment in Browne’s Addition. He faces charges of producing and possessing a biological toxin, mailing a threatening communication and threatening to kill the president of the United States.

Court records show at least two of the letters included the language: “We have a bomb placed, we are going to Kill you!” They were signed, “Hezbollah.”

U.S. District Judge Lonny Suko in Spokane recently recused himself from the case because one of the letters targeted his colleague, Judge Fred Van Sickle. The case will now go before federal Judge Ancer Haggerty of Portland. The trial is set for May 5.

While the threat of bioterrorism remains an ever-present concern, Pardick and Talcott say their workers usually have much more common risks to worry about as they process packages and deliver mail out on the streets of Spokane.

“Outside of the anomalies, stuff like the ricin and the anthrax and the suspicious packages, it’s actually a pretty safe place to work,” Talcott says. “The guys that have the biggest risks are the guys who are out delivering everyday — motor vehicle accidents, dog bites, trips, slips and falls — those are probably the biggest hazards.”