Dive into the Spokane River with the Inlander's 2018 River Issue 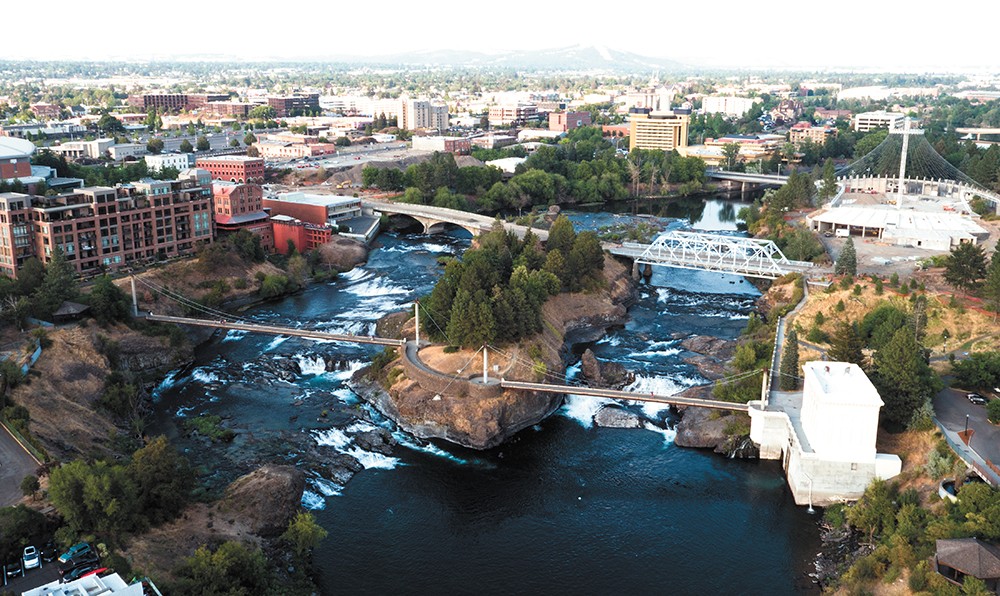 Water is power, and it's the heart of our region. We're mesmerized by the river's falls and we play in its currents.

We bridge it, we dam it, we try to harness its power. The river gives life; it also takes it.

As it roars and trickles, the 111-mile Spokane River sustains us. From its origin at Lake Coeur d'Alene to its mouth at the Columbia River near Fort Spokane, the river brings fond memories, and it brings tragedy. Some dump trash here. Others take away treasure.

Inside, we've compiled the stories of several people for whom the river holds special significance. We tried to capture a breadth of perspectives: from the artist to the tribe to the first responders. You'll read about its quirks, its beauty and its danger. You'll meet a Kokanee-drinking pirate, a prolific painter, two young anglers and even the man who controls the river's flow with a computer.

The river runs through the Inland Northwest, and through each one of us. Almost everyone has a river story. Here are just a few.

A BRIEF HISTORY OF THE SPOKANE RIVER

Prehistoric civilizations camp at the river

The oldest known archaeological evidence from an area at the confluence of the Spokane River and Latah/Hangman Creek, called the Spokane Site, shows that prehistoric groups regularly camped there thousands of years ago while hunting, fishing and gathering native plants. Other artifacts — hearths, stone tools, animal bones — uncovered in the area date back to 3,500 years ago. Due to layers of sand deposited over these prehistoric campsites each spring, the Spokane Site was naturally preserved in archaeological "layers."

On the orders of North West Company agent and surveyor David Thompson, Jaco Finlay began construction on a rustic outpost for the fur trading company where the Spokane and Little Spokane rivers meet. For the next decade, the Spokane House served as both a cultural and commercial center for white explorers, fur trappers and traders and Native tribes across the Inland Northwest. The Spokane House was abandoned as a trade outpost in 1825 in favor of a post at Kettle Falls called Fort Colvile.

Pioneer and businessman James Glover arrived on horseback from Oregon to an area surrounding the Spokane Falls in May 1873. He encountered shacks and squatters and slept that first night in a roofless log cabin near the riverbank. After waking the next morning, Glover recalls being immediately "enchanted" by the roaring falls, setting out to explore the tributary that would become the centerpiece of his envisioned Western city. By the end of his second day here, he'd purchased the land claim encompassing the falls, later writing: "It lay there just as nature had made it, with nothing to mar its virgin glory. I determined that I would possess it."

The first hydroelectric dam to block annual salmon runs on the Spokane River, located 29 miles downstream from the river's mouth at Lake Coeur d'Alene, went online in 1911. Without an effective fish ladder, all salmon runs above the dam thus ceased, preventing the Spokane Tribe and other tribal groups in the region from harvesting the fish that sustained their people for centuries. The final devastating blow to inland tribes' reliance on salmon runs came with the opening of Grand Coulee Dam in 1942, blocking salmon and steelhead from 1,140 miles of upstream rivers, including the Spokane. Today, seven total hydroelectric dams exist on the river, spanning from the Post Falls Dam to Little Falls in Lincoln County.

For more than the next three quarters of a century after the city's founding, the river served as an unlimited garbage dump for trash, sewage, chemical runoff and industrial waste. By the 1920s, the river's dismal state was not only an embarrassment to the city bearing its name, but a major health and environmental hazard. Residents finally were beginning to see the need to do something about it. An order was issued by the state in 1931 for Spokane to stop using the river as its sewer, yet city leaders and residents fought a need to increase taxes to fund a sewage treatment plant for more than a decade to follow. Due to that pushback, among other factors, the Riverside Park Wastewater Treatment Plant (now called the Riverside Park Water Reclamation Facility) didn't go online until 1958.

The late construction of a wastewater treatment plant didn't, however, solve all the Spokane River's woes — pollution included. The city's famous falls and roaring rapids coursing through downtown were still obscured by bridges, train tracks and other industrial operations. Local efforts to revitalize Spokane's natural centerpiece culminated in a grand plan for Spokane to host the 1974 World's Fair, themed around protecting and preserving the environment. After some struggles, city leaders and Expo '74 backers secured funds to remove the Great Northern Railroad Depot and train tracks from along the Spokane River, on Havermale Island and around the falls to create the 100-acre Expo '74 site, and what's now Riverfront Park.

Continued renewal of and focus on the Spokane River as an irreplaceable feature of the region also led a group of passionate residents to propose, in 1986, a multipurpose recreational trail along its banks, spanning from Lake Coeur d'Alene to the Little Spokane River. Local and federal funds supported the trail's construction, which was completed in 1991 and connected Washington's now 39-mile side of the trail with Idaho's own 21-mile Centennial Trail. A missing piece of the trail, between Spokane's West Central neighborhood and downtown Spokane, was added through Kendall Yards and under the Monroe Street Bridge in 2013. Another 2-mile extension in Nine Mile Falls was completed in 2016.

Seeing a need to legally protect this precious natural resource of our region, the Spokane Riverkeeper program was founded by a group of local attorneys in 2009. For nearly a decade now, the Riverkeeper program has worked to ensure equitable access, to protect the river from pollution and to restore and conserve its watershed for future access. Rick Eichstaedt was Spokane's first riverkeeper before Bart Mihailovich, who served in the position until 2014, when current Riverkeeper Jerry White took over, and who's still serving in the position.

(Timeline information was largely sourced from chapters in The Spokane River, edited by Paul Lindholt, along with past Inlander features.)

The original print version of this article was headlined "River Town"