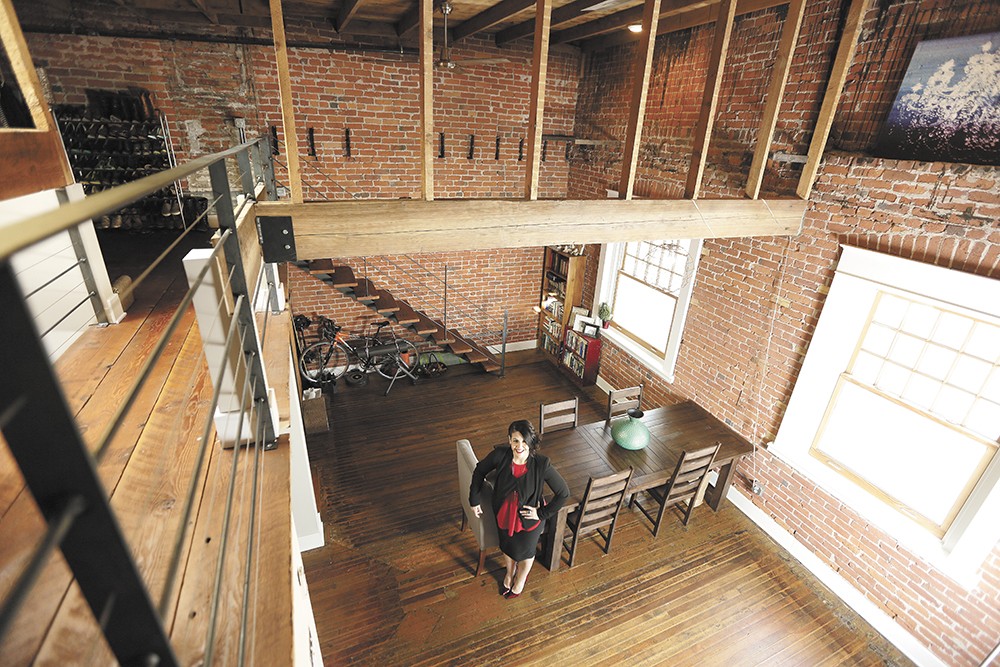 Young Kwak
Robin Haynes, a Spokane attorney and president-elect of the Washington State Bar Association, was one of the first residents at the Bickett.

Having graduated from high school in Spokane and earned undergraduate,

master's and law degrees at Gonzaga, Robin Haynes knows she's a bit of an anomaly in her town.

"I feel kind of like a unicorn in Spokane sometimes," Haynes says. "I'm 38. I don't have any children. I've never been married. I have a professional job, I live downtown and I walk to the yoga studio. I'm like a stereotype of Seattle or some other city where this is how people live, but in Spokane, people are like, 'What do you mean you live downtown?'"

Haynes is living proof that a young professional can live the urbane, urban life here. A lawyer with McNeice Wheeler and the youngest ever president-elect of the Washington State Bar Association, Haynes has lived downtown since she graduated from Gonzaga School of Law 10 years ago, most recently becoming the first tenant of the Bickett, an eight-unit complex built by developer/photographer Jed Conklin in the century-old building on West Riverside, in July 2014.

Step inside the front door of her loft, and you're immediately greeted by a soaring entryway topped by a huge sunlight. The exposed brick- and wood-dominated space's 870 square feet are efficiently divided into two levels, the living room/kitchen and entertaining area overseen by an upstairs bedroom.

She's mulled moving to Seattle, where her work and role with the state bar require near-weekly trips now, but says "I can get a heck of a lot more for my dollar in Spokane." She also considered buying a house, but that was more than the self-described "minimalist" wanted to take on.

Her block is remarkably quiet, and while nearby charity services and bars mean that indigent folks and late-night revelers are part of daily life, so is easy access to the riverside running trail and the interstate. Parking is the biggest headache, but the ability to stroll to Main Market, coffee shops and the growing number of great restaurants she frequents makes downtown living ideal. And at the Bickett, she's part of a small cadre of fellow young professionals, "kind of a little pocket of like-minded people who are doing different things."

The building "feels a little more urban than Spokane is, which I like," Haynes says. "You can live in New York City and never leave your house and never really experience anything there. You can make Spokane what you want it to be because there are a lot of cool things going on. I feel like a lot of people go, 'Oh, I don't like the winter' and they never leave the house. Or only go to chain restaurants and Super Target. That's a miserable experience I don't want to have." ♦