Twelfth Night takes the line "If music be the food of love, play on" and runs with it 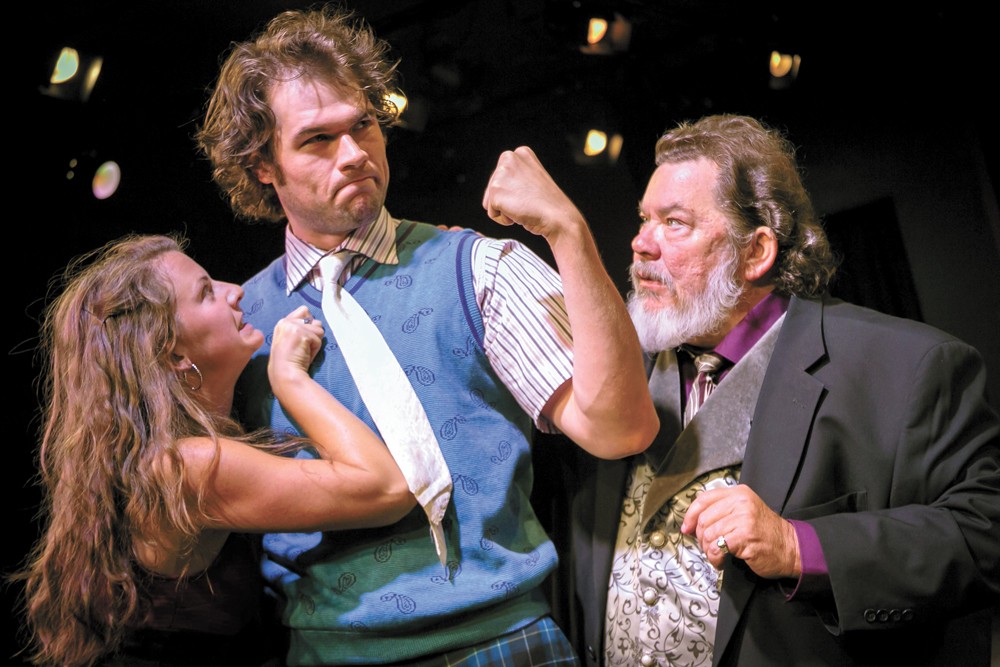 is part of that rarefied constellation of entertainers associated with high culture. The mere mention of his name evokes images of actors speaking antiquated verse in dainty accents, dressed in frilly Elizabethan ruffs, holding skulls aloft and waxing philosophical about the meaning of existence.

For all his putative stuffiness, The Bard liked nonsense and bathroom humor as much as anyone. This isn't the only side of the playwright that Eastern Washington University lecturer Jeff Sanders has showcased in the past, but it's one he certainly enjoys. Last summer, Sanders directed and performed in a joint Interplayers/EWU performance of A Midsummer Night's Dream, a Shakespeare comedy full of magic, mistaken identities and a dimwitted character called Bottom who's transmogrified into an ass.

This summer, Sanders is heading an even more ambitious co-production between the same theater (since reborn as The Modern Spokane) and his university in a production of Twelfth Night — a Shakespeare comedy that involves a shipwreck, mistaken identities and a wily inebriate called Sir Toby Belch.

"Last year was about that first collaboration between a professional theater and our theater program, and also trying to get our work at EWU downtown, and also getting our students to work with professional actors and designers to give them that experience," says Sanders. "It was also about that first step: Will people like what they see onstage? Doing Shakespeare, sometimes you never really know if the light's going to be on or off in terms of audience engagement and interest."

The reception was "enthusiastic" and "very satisfying," he says. It gave both the professionals and the students the "momentum" they needed to pursue a second outing. EWU and The Modern started planning the next co-production shortly afterward, and Sanders began applying for the necessary funding to make it happen.

"I never know if the funding's going to come through. But the motto of Eastern Washington University is 'Start Something Big,' so I think our dean was really supportive of this idea, and really believes in having Eastern be a cultural centerpoint. And to do that, we have to get out of Cheney and into Spokane," says Sanders.

With Midsummer, says Sanders, "it was essentially Eastern and professional actors. That scope has widened from last year. These different educational institutions are chipping in and collaborating in their own way."

Nichole Meyer, a recent Eastern grad who played Hermia in Midsummer last year and has since gone on to perform locally in Equus and Boeing Boeing, stars as Viola. Nich Witham, another professional actor familiar to local audiences, plays Duke Orsino. Zach Baker, who's worked as the musical director on countless area productions, has written new music commissioned expressly for this show.

"It has almost a Glen Hansard [in the film] Once feel. He'll be on a thunder guitar one second and an acoustic the next. And the singing is beautiful. It's going to feel very modern, very now."

The result, Sanders hopes, is a production that unites the appeal of rock opera with the enduring universality of "beautiful poetry" and "fart jokes."

"We're dealing with text that's 400 years old. We live in an image-driven culture, and sometimes that's a barrier. I always try to make my plays very physical, very fun, while also maintaining the balance of crisp, good text.

"There are a lot of Bard lovers out there," Sanders adds. "We want them to come out of the woodwork and come to the theater." ♦