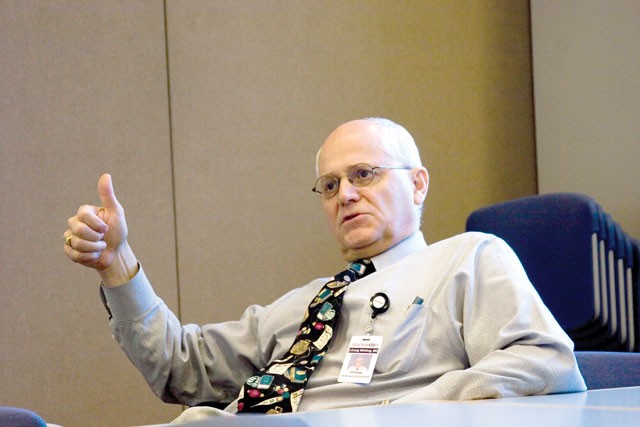 Jessie Lee Cederblom
Dr. J. Craig Whiting of Rockwood Clinic: "It's what you do with the profit that counts. We have an 80-year tradition of using that for the benefit of the community."

A little more than three years ago, about 40 higher-ups from Rockwood Clinic gathered at Fotheringham House in Browne’s Addition for the clinic’s annual board retreat. That weekend, the assembly of board members, executive administrators and other health care officers made a fateful decision at the quiet bed and breakfast not far from downtown Spokane.

“The main thing that came out of that [retreat] was this vision about becoming a nationally recognized health care entity,” says Dr. J. Craig Whiting, the president of Rockwood’s board of directors. Whiting has acted as the clinic’s interim CEO since January 2008. “We couldn’t name any national multi-specialty clinic that wasn’t in some way affiliated with a hospital.”

This October, Rockwood announced its intention to align with Community Health Systems, Inc., which bought Deaconess Medical Center and Valley Hospital and Medical Center last year. The result, says Whiting, will be a vibrant health care system, where hospitals and clinics — inpatient and outpatient care — are part of one integrated and coordinated structure.

“In order to really become top-echelon quality, you have to be able to control and participate in the care of the patient across the whole continuum. You’ve got to be able to know what goes on with the patient not only in the clinic, but in the hospital, in the rehab, in the post-hospital care,” Whiting, a urologist, says. “When I receive a referral from one of my colleagues, I’ll know what the referral is about; I’ll have access to all the previous records … a set of X-rays or lab tests. I’ll know that those are accurate and that I can use them and I can count on them and I don’t have to repeat them.”

Dr. Kevin Sweeny, who has been on leave for the last year but will return as Rockwood’s CEO beginning Jan. 1, says partnering with CHS will re-make both companies — and perhaps the region. Rockwood’s board was widely expected to approve the merger at its meeting Dec. 23, 2009, just before this edition of InHealthNW went to press. With more than 1,100 employees, including 130 doctors serving 160,000 patients, Rockwood is the area’s largest multi-specialty clinic, and in the top five for the state.

“There are enormous pressures and expectations to maintain state-of-the-art equipment, maintain state-of-the-art programs, maintain programs that evolve as the population ages,” he says. “The opportunity to partner with a larger system allows us to continue to expand, to offer [our] services to Spokane County and beyond. Program development needs a great deal of energy both on the financial side and on the labor side. This gives Rockwood and CHS a chance to really use combined resources to market, to have patient contacts, and to continue to grow.”

These hopeful assertions of national recognition and powerful partnerships come on the heels of vast change for Deaconess and Valley hospitals. In 2004, the hospitals came up $36 million short in their budgets. Three years later, Empire Health Services, which owned the hospitals, said $100 million was needed to modernize Deaconess. A year later, in 2008, the Tennessee-based CHS stepped in and purchased the hospitals for $156 million. Since then, CHS has begun a slow transformation to both medical centers.

In April 2009, Deaconess cut 90 jobs, citing the recession. At the same time, it purchased $10 million in new medical equipment and technology. In May, the hospital dropped its trauma care unit, leaving that grisly business solely to the Providence Sacred Heart Medical Center for the first time in 14 years, a time in which the two hospitals had shared responsibilities as the region’s trauma centers.

In June, Deaconess closed its Parkinson’s Disease clinic and fired its director, Dr. Anthony Santiago, who had come from Rockwood years before. Santiago had 800 patients, some of whom came to see him from across the region and over state lines. Officials said the closure was a cost-cutting measure, but it caused a backlash. “This decision is a tragedy for patients. What Spokane is losing is a doctor who is truly empathetic, knowledgeable and caring,” Bill Bell, executive director of the Northwest Parkinson’s Foundation, told the Spokesman-Review. “At what point do you put community care ahead of the bottom line?”

“It is clear to us that the interim leadership of Rockwood is leading the Rockwood physicians down a very dangerous path fueled purely by profit motive,” Dr. Andrew Agwunobi, the CEO at Sacred Heart, said in a Spokesman-Review article a day after the merger was announced. “This speaks to a lack of integrity and simple decency on the part of Rockwood’s interim leadership and board,” he said then. Agwunobi would not comment for this article.

But Whiting rejects these assertions.

“Rockwood Clinic is by definition a for-profit organization. By him saying that, he’s saying we’ve been evil and not motivated by the right thing. And that’s a little offensive,” he says. “Besides which, this is a capitalistic society. We are built on profit. It’s what you do with the profit that counts. We have an 80-year tradition of using that for the benefit of the community. … And that’s not going to change.”

Sweeny says the main motivation for the merger is respect for “quality service, safety and people.”

“If you look at where CHS puts their emphasis, it’s, ‘We provide high-quality care, and we do it in a safe environment, and we give service that’s memorable and hopefully as close to perfect as we can.’ That overlaps with what we are doing. It was such a natural melding. It’s almost like destiny. Who knew three years ago CHS would be in Spokane? No one. Here we are as a company, evolving, and we just crossed paths.”

Sweeny says the region has become big enough to support two vibrant hospital systems, and he’s not worried about either CHS or Sacred Heart disappearing.

“There’ll be two dominant health care systems in Spokane. Both hospital systems are going to be here and be strong. The Providence system is large and very dominant. The CHS system is very successful and [is] going to invest in our community,” he says. “In five years, when all’s said and done, we are still going to be Rockwood.”