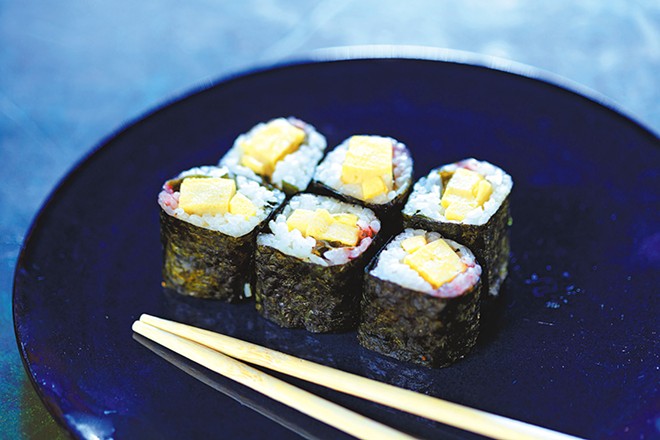 The idea is weird (and certainly not commonplace), but the extravagant manner of eating sushi off of another human being speaks to the cuisine's indulgence and precision. Even the simplest sushi roll — like a simple kappa maki, which combines sushi rice, seaweed and cucumber — can pack a wallop of sweet, salty, bitter, sour and umami when paired with soy sauce, wasabi and pickled ginger. To eat sushi is to not only indulge your taste buds, but your mind.

Sushi, in fact, isn't raw fish. That's sashimi — and, given the slippery texture, it's not really my thing. Sushi actually refers to vinegared rice, which is the building block to a good sushi roll. There are an infinite number of sushi rolls out there to be eaten, and I ventured out to see what kind of indulgent, kooky combinations I could find in the Inland Northwest.

My first stop was Yuzen Sushi, a sushi bar in the old Thai Bamboo spot on North Division that I'd seen local foodies tweet their love for. On a Friday night, I lured some friends up there and we ordered a tableful of sushi rolls. It was easy to see why Yuzen has fast become a favorite: the menu didn't disappoint when it came to offering tons of flavors I hadn't seen or tried before. My favorite was the Ume-Shiso roll ($4.50), a combination of Japanese plum with tamago (an omelet-type creation made with eggs, soy, sugar and mirin) and shiso, that was sweet, sour and disappeared off our plate almost immediately. Yuzen's Futo-Maki Roll ($6.50) was a close runner-up: a roll made of boiled spinach, egg, ginger, kanpyo (pieces of dried gourd) and sweet fish powder.

I was downtown around dinnertime one night and stopped into Sushi.com, which was packed on a Tuesday night. After ordering from the restaurant's massive menu and downing a plate of spicy and tangy edamame, the sushi chef passed a plate snaked with Curtis Rolls ($9.95) over the counter. It's a vegetarian roll (vegan if you omit the sauce), combines deep- fried squash, onion and carrot with sushi rice, and is topped with avocado, slices of inari (sweet, deep-fried tofu) and creamy wasabi sauce. It's a perfect roll, in my mind: sweet, spicy and clean, especially with pickled ginger on top.

The pint-sized Syringa Japanese Cafe & Sushi Bar in Coeur d'Alene, offers the closest thing to what I'd call "Inland Northwest Japanese" that I could find, with its Coeur d'Alene Roll ($7) — a fusion of smoked Idaho trout, cucumber, avocado and radish sprouts. Its Northwest Roll ($10) combines tempura-battered green beans with sautéed mushrooms and smoked salmon laid over the top.

Down in Moscow and Pullman at Red Bento Restaurant, you can find several different takes on the traditional California roll — like the Japanese Lasagna Roll ($8.95), which adds baked cream cheese, fish roe and scallions to the traditional ingredients.

Sure, we might not be close to a coastline — and that's a deal breaker for a lot of people who want to eat sushi. But there are still a lot of interesting flavors worth trying at local sushi spots — and no, you won't have to eat off of a stranger to feel like you're indulging. ♦