The sport of roller derby is making a comeback in Spokane, powered in part by women who work in health care 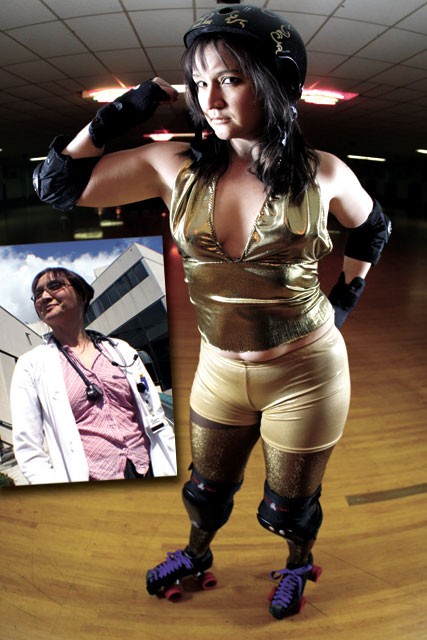 Spokane doctor Esther Smith flags me down outside her office at Fifth and Browne, her white lab coat flapping in the breeze. “I’m sorta outing myself here,” she confides. She doesn’t want anyone back in the office of Spokane Family Medicine to know.

You see, on weekends, Esther “Es Terminator” Smith plays a mean blocker as a member of the Lilac City Rollergirls. After growing up in New Hampshire and attending med school at the University of Arizona, she was offered a strong family medicine residency in Spokane, and she and her husband and kids decided to stay. Then it got interesting.

“So one day,” Smith recalls, “this girl comes in, all punked out, and she says, ‘I’ve hurt my back.’

“So I ask her, ‘How did you hurt yourself?’ and she isn’t sure she should tell me, but she says, ‘Playing roller derby.’ And I say, ‘Really? I’ve wanted to do that for years, but there was no time in med school’ — and next thing you know, she’s scribbling out a practice schedule on a paper towel.

“I don’t blame her for not wanting to tell me. And she’s got tattoos and piercings all over. You know, there’s this whole group of doctors — I’m gonna get in trouble for this here — who’ve been in academia all their lives and don’t know how to act around somebody with lots of piercings.

Smith admits to having been “a crazy punk theater girl” when she was 14. But now, like a lot of derby girls, she values having a rounded personality: “I can have a serious profession,” she says, “but I can also do loads of laundry that are all black.”

She likes variety, too. “Derby is an interesting combination of things — 80 percent sports, 10 percent theater, 10 percent Girl Power. I like my derby sisters. I have relationships as a result with people who I never would have met otherwise.”

Not far away, over in Sacred Heart Hospital’s Cardiac Care Unit, there’s another health professional who likes to get better acquainted with the idea of pain.

“I hurt people in practice,” says Heidi Muat, confirming the promise her derby name — “Ida B. Cho Azz” — seems to make. “A lot of gals say they don’t want to skate with me. So I try to back off, but I’m a really aggressive person by nature.”

Muat, a nurse in the unit, has chosen several outlets for her aggression. Running, mountain biking, ice hockey, weightlifting, boxing — she does it all, several times a week, in addition to roller derby. She was “into gymnastics, really intensively” for eight years when she was a kid.

All that activity has taken its toll. “I’m always breaking something,” Muat says. “I played [a recent] bout with a broken foot. It was a stress fracture, and during the previous bout, by skating on it, I cracked it worse. They wanted me to wear one of those immobilizer boots, but that doesn’t exactly help with the skating.

“I have a fairly high tolerance for pain. I’ve broken a lot of stuff — I’ve broken both shoulders, both ankles, a couple of ribs, my tailbone. I think maybe I have an adrenaline addiction or something.”

Pain does have a way of clarifying the mind — and in Muat’s case, it pointed out a new career path. “I was getting injured all the time and coming in to the ER,” she says, “and I thought, ‘I’m comfortable with all this blood.’ So I went back to school.” And now Muat, 35, works the overnight shift at Sacred Heart, “taking care of patients who had heart attacks, or they’re getting ready for open-heart surgery, or they just had a pacemaker installed.”

She prefers the night shift. “The day shift does a lot more meds, routine stuff,” she says. But at night, with just a skeleton crew, “the exciting part is, we run codes [emergencies]. So there’s more adrenaline.” Muat likes adrenaline.