How one farm is providing delectable, healing mushrooms to the public

From reading a mushroom book to opening a fungi farm,

Arrow and Joe Flora struck the right note in fulfilling a life passion.

"For me personally, to be able to dedicate myself to something, it needs to connect to the larger universal picture, and mushrooms do just that," Arrow explains. "The patterns the mycelium form are remarkably similar to the structure of our brains and even the pathways of the Internet."

Fungimental Farm in the small community of Rice, Washington, west of Colville, features oyster mushrooms, with room to grow additional popular edible and medicinal mushrooms such as shiitake, reishi, cordyceps and more.

The Farm's beginning required some digging to unveil the Floras' common passion for the underground world.

In 2013, the young couple watched a video featuring mushroom guru Paul Stamets in which Stamets posed the notion that every mushroom farm should become an ecological center of healing.

"At that time, Joe and I had some seed money and were searching for a niche we could fill in our community," says Arrow. "At that moment after watching the video, we looked at each other and said, 'That's what we're going to do.'"

Getting started was a whole new ballgame for the Floras. Joe, an airplane mechanic, and Arrow, who has a permaculture design certificate, had to learn mushroom farming techniques from the ground up. 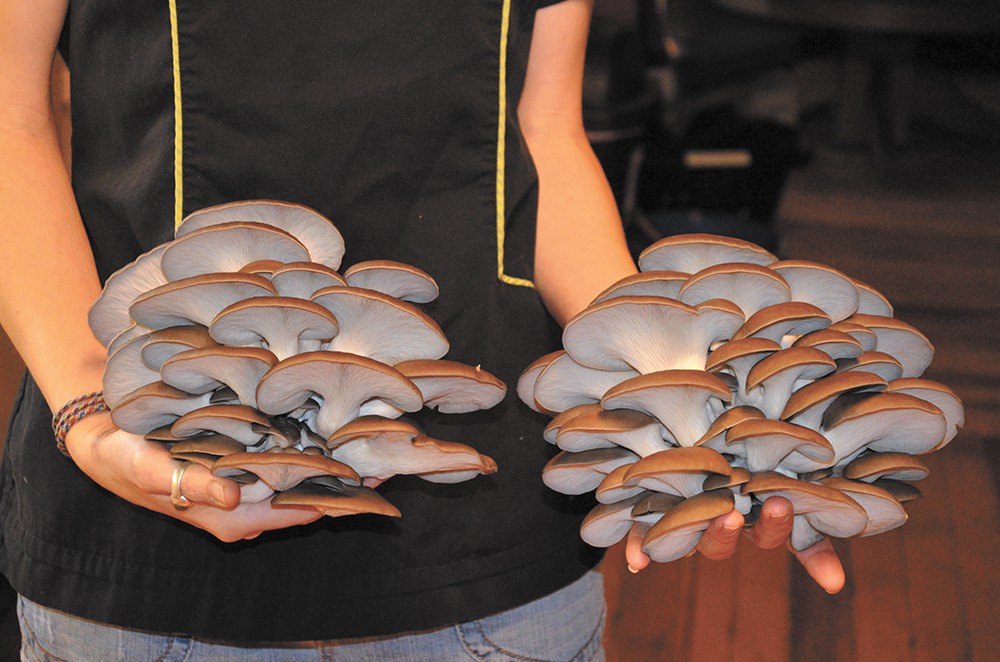 Fungimental Farms are almost entirely self taught when it comes to the science of fungi.

"We're self-taught mushroom growers, essentially," she says. "We just dove into books and online resources out of our passion for the venture."

Fungimental Farm has been in production for a year. They grow pearl oyster and blue oyster mushrooms, which are available at Meyers Falls Market in Kettle Falls. The Floras have high hopes of growing toward Spokane and beyond. Fungimental Farm's mushrooms are in high demand, another reason to work toward growing the operation.

"Sometimes [the market] sells out in a day, so we are working on increasing our production. We would like to expand in our product diversity as well," says Arrow. "The king oyster is another mushroom on our list, since they are the choice edible among all the oyster mushrooms. Shiitake, reishi, cordyceps, you name it."

Though oyster mushrooms are not as high on the medicinal list as shiitake or reishi, they have immune-enhancing properties and are noted to have more protein than eggs. They don't dry well, so a popular way to eat them is in stir-fries, soups or battered and fried with tasty dips. In Asia, oyster mushrooms have been common in the diet for centuries and are sold at most every local market.

Fungimental also has plans to make mushroom medicine with some of the fungi strains, as well as branch out into mycoremediation.

"We really like the idea of working with fungi to clean contamination in the environment, or mycoremediation," says Arrow. "Besides breaking down hydrocarbons, oyster mushrooms are also very good at mycofiltration, which means they can clear toxic waste and microorganisms from the water. We actually have some working in the creek on our land right now."

Another value-added byproduct of growing mushrooms is the spent straw from the fruiting medium; it is a friend to garden soil, outright killing nematodes, a type of roundworm.

"We eventually look to branch out as Paul Stamets suggested, where not only do we provide the edible gourmet mushrooms, but also that we start working closely with the fungi and the earth, to the point in which we are able to educate others on the fundamental importance of fungi in our lives and ecosystems, while at the same time healing our planet and ourselves," she says. ♦