Rooting Out the Past

A food coalition fights for healthier foods on the Coeur d'Alene reservation. 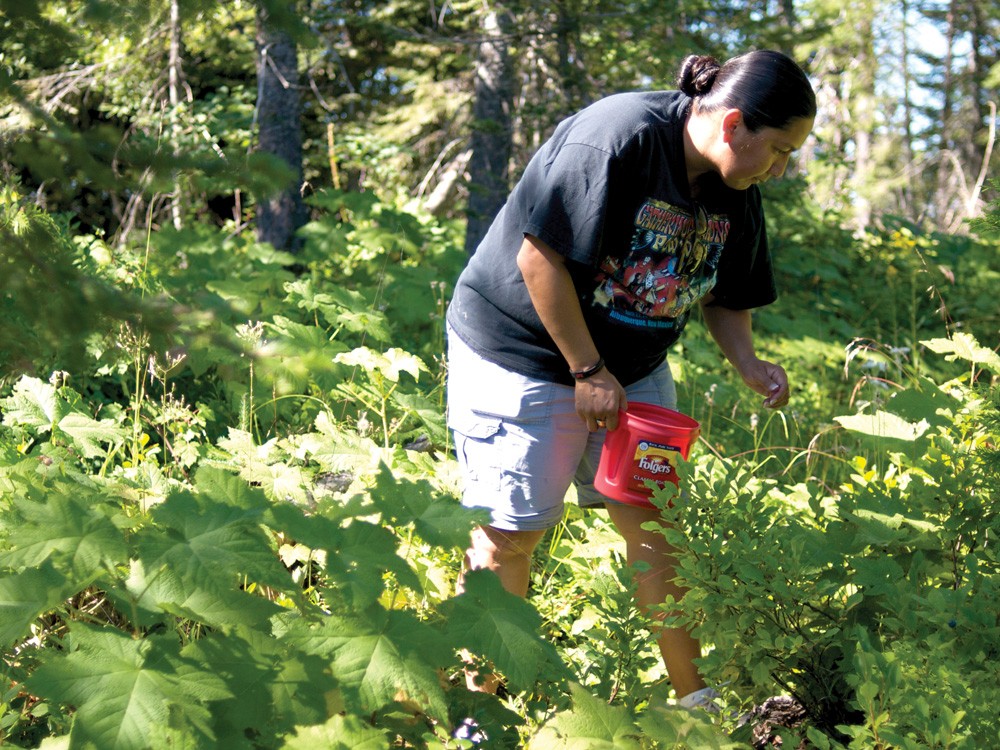 Stepping into the Family Foods supermarket in Plummer, Idaho, 34 miles south of Coeur d’Alene, is not unlike stepping into a supermarket anywhere in rural America. A case full of day-glow donuts and thickly frosted cakes grabs the eye the instant a shopper walks through its door. The deli counter is stacked in crisp brown mountains of deep-fried everything. Apart from a long wall of pricey produce and an impressive meat counter, space is given over to a typical assortment of packaged and processed fare.

There is nothing exceptional about that supermarket other than the fact that it sits on the Coeur d’Alene Indian Reservation, home to a community grappling with obesity, diabetes and other food-related illnesses that studies have linked to the kind of unexceptional food lining American grocery store shelves.

A group of local food activists say Plummer’s only grocery store isn’t the root problem, nor is it the convenience stores and fast-food outlets that dot the main drag. It’s the lack of healthy, affordable food options available to a town of 900 people.

That group, the One Sky/One Earth Food Coalition, wants to change things.

“We’re rampant with diabetes,” says LoVina Louie as she and three other coalition members picked huckleberries in the mountains east of town on a cloudless August morning. A 2008 federal study found that Native Americans between the ages of 15 and 19 experienced a 70 percent increase in diabetes between 1994 and 2004.

“It’s just so much easier to buy fried foods,” Louie adds. “That kind of food is what’s killing us.”

The link between diet and disease is hardly unique to Native Americans, but the problem is often amplified by factors unique to reservations, many of which are located in “food deserts,” defined by the USDA as areas “with low access to a supermarket or large grocery store.”

Also, reservations are often located on unproductive land or arable land leased to non-natives involved in large-scale, commodity agriculture. One study found that 70 percent of America’s tribal croplands are leased to non-Native Americans. Much of the Coeur d’Alene Tribe’s land is leased to commodity wheat producers who sell their product to distant markets. In addition, many tribes have limited access to land suitable for practicing traditional, ancient food ways.

The net result is that Native Americans tend to produce little of their own food and have limited control over the kinds of foods imported into their communities.

“So we started this little food coalition,” says Laura Laumatia, the University of Idaho Extension educator for the Coeur d’Alene Reservation and one of the four women picking huckleberries today. As she drops berries into a bucket, Laumatia says “a mix of tribal and non-tribal folks” formed the coalition on the reservation a year and a half ago to take control over their community’s food choices.

“We decided to keep it pretty informal and started planning events where people would feel comfortable,” Laumatia says of the coalition’s fledgling efforts.

“Everybody always likes to have a meal together, and that definitely ties into traditional Coeur d’Alene culture,” she says. So in 2010, the coalition began hosting bi-monthly dinners. At the dinners, the group showed provocative food films, like Fresh and Food, Inc., and then discussed them.

“That was how we got started,” Laumatia said.

“But then we realized you have to look at the whole system.”

After acquiring some donation and grant money, the One Sky/One Earth Food Coalition — which by then included the tribe’s Department of Natural Resources, its Cultural Department and other key community organizations — grew more ambitious. They began offering instructions to home gardeners and, in April, built one of three small community gardens. They even talked the tribe’s Wellness Center staff into replacing many of its highly processed, sugary snacks with healthier hummus, Greek yogurt and whole-wheat products. Picking huckleberries was another way coalition members were trying to improve the reservation’s food future — by supporting the tribe’s ongoing efforts to preserve and reinvigorate its hunting and gathering traditions.

“We’re hoping we might be able to use some of these huckleberries for our Water Potato Day event,” says Gina Baughn, the tribe’s natural resources education specialist. Water potatoes are an aquatic tuber that the Coeur d’Alene Tribe once foraged along the banks of Lake Coeur d’Alene. Every fall, the tribe puts on Water Potato Day as an educational opportunity and celebration.

“We hope to have a teepee set up and some traditional foods [like huckleberries],” Baughn says. “Then we’ll have some elders talking about the importance of water potatoes and traditional foods.”

The tribe has been inviting surrounding schools and the general public to the event for about a decade now. This year’s water potato events will be held Oct. 26-28.

Louie, who, a couple of hours into the huckleberry picking session had picked more berries than anyone else, mentioned helping with another tribal-food program back in June. At a “culture camp week,” tribal children were taught how to erect teepees. They learned to skin, quarter and dry deer meat; catch fish; and dig camas — another iconic staple for many Idaho Indian tribes.

As positive as the event was, it also gave Louie pause.

“All the kids we took digging camas, they had never dug camas,” she says. “They didn’t even know what to look for. And, you know, some of the boys had never been out hunting … And that’s who we are.”

For Louie, the tribe losing its food traditions is tantamount to losing its identity. And that’s potentially more damaging than a disease like diabetes.

Across the country, other Native American tribes have recognized the cultural importance of food and are trying to take more control of their diets, in what a recent report called a “tribal food sovereignty movement.”

In Arizona, Hopi and Tohono O’odham groups are working to strengthen school garden programs and local agricultural projects on tribal lands. In New Mexico, the Taos Pueblo is trying to revitalize agricultural traditions and become more food-independent. The multi-state Navajo have similar programs, as do the Oneida Tribe of Wisconsin and the Anishinaabe of Minnesota.

Still, Louie thinks there’s a long way to go, at least in Plummer.

“We don’t even have a farmers market, you know? Like there’s a few of us that are tying to have gardens, but I don’t even know much about gardening.”

In some ways, she said, the situation has gotten worse — they now have a Zip’s in Plummer.

Immersing herself in huckleberry bushes seems to brighten Louie’s mood. Before heading out to pick, she mentioned having recited a traditional tribal prayer of thanks to the huckleberries.

“We’re supposed to pray, and we’re supposed to give thanks, because these berries are giving up their lives for us. Even when our men go out hunting, you pray and you ask that [animal] if it could give its life to feed our people. It’s a connection we have.