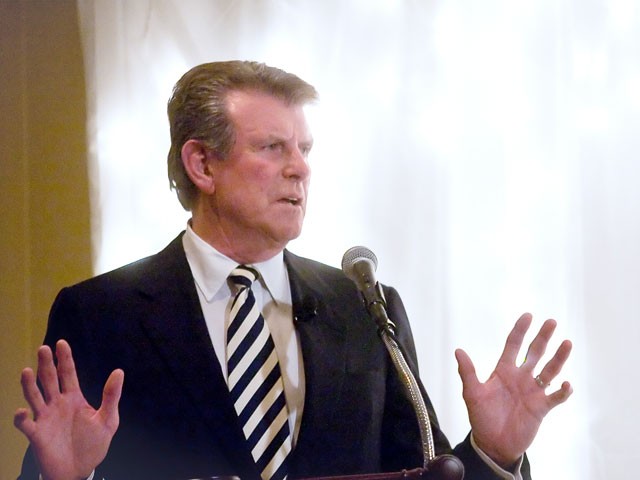 If a budget deficit were as easy to lasso as a Secret Service agent, Idaho Gov. Butch Otter could be hailed as a hero for hard times. Otter, an honest-to-God rodeo cowboy who still competes in team roping on the senior circuit, instead is taking heat for proposing cuts to education, human rights, public television and public parks to cover a $40 million hole in the state’s general fund, as he laid out in his State of the State address last Monday. Worse, he says, the budget hole expanded to $53 million the very next day, when December tax revenue came in lower than projected.

Otter has also proposed slicing 400 state jobs (all but 25 are already vacant), adding another round of unpaid furlough days for remaining workers and permanently deleting funds for Hispanic commissions and councils for the disabled and deaf.

Otter’s final grade as a governor is still pending, but The Inlander came to appreciate him as an engaging cowboy poet among politicians. The trim, 67-year-old governor had been on the go for 18 hours when he sat down with a cup of coffee in his shirt sleeves for a late-night interview in Post Falls last week.

Here is our favorite part of the conversation: Otter, a three-term congressman (2001-06), tells a story of going to the stables at the National Zoo, looking to do some horseback riding in D.C.

“They had a bunch of Secret Service people out there learning how to ride,” Otter says. This was Vice President Dick Cheney’s security detail, he says, and since Cheney liked to go riding when visiting Wyoming, the agents had to learn how to ride, too.

Otter says he offered to teach the agents how to rope in order to deter any threat — fill in your favorite: hippies, Democrats, hunting partners, Osama bin Laden — that they might encounter.

“I said, ‘Hell, I can show you how to head or heel anybody that was going to bother [Cheney].’ They thought it was funny. They didn’t think I could only rope their legs without throwing the loop over their heads. You know, all you do is throw that rope right in front of them and they run into it just like a steer!” the governor exclaims.

“I said, ‘You take off running!’ And they took off running and I roped their legs.” Otter breaks into a laugh. “It was great! Even if you catch him by one leg — it’s a five-second penalty in the rodeo — but you still got him in real life.”

OTTER: Education is where 52 percent of our money is, K-through-12. [During the last two years,] we’ve cut all the other agencies an average of 17 percent. We hadn’t cut education at all. When we had this additional downturn, we had to go where the money is.

And we’ve only cut education out of the state fund 1.6 percent. In the total scheme of things, we cut all these others to the bone.

(NOTE: Idaho Superintendent of Schools Tom Luna says while Otter presents the cut as $14.3 million from the general fund, the holdback is actually more like $130 million when adding other dedicated state funds, federal stimulus monies and other federal education funding that also goes away.)

Are you going to privatize Idaho parks?

No. That’s not going to happen. … You have to look around at what’s taking money away from education. What I’m telling our parks people is that in four years, I want to wean you off any money coming from the general fund so that money can go to education.

(In his remarks earlier that night, Otter said, “We’ve got parks that make a profit — all I’m asking is that we put the whole system on that status where we can at least break even and the parks should be self-sustaining.”)

I think they kind of got caught in a discussion … but it ended up getting back on the table. I thought we had it off the table for 10 years. When it comes right down to it, do you know what a carbon footprint you’d have to have to replace 3,000 megawatts of power?

(NOTE: The Inlander has seen power generation figures that show the four dams typically produce more on the order of 1,000 megawatts of electricity even though they are rated for 3,000.)

Now that your shoulders are healed, will you rodeo again?

Oh, yeah. I pay my money and go in and rope for the buckles. It’s fun. It’s a great way to get around the state. I don’t know what we have now, but at one time Idaho had 700 rodeo days.