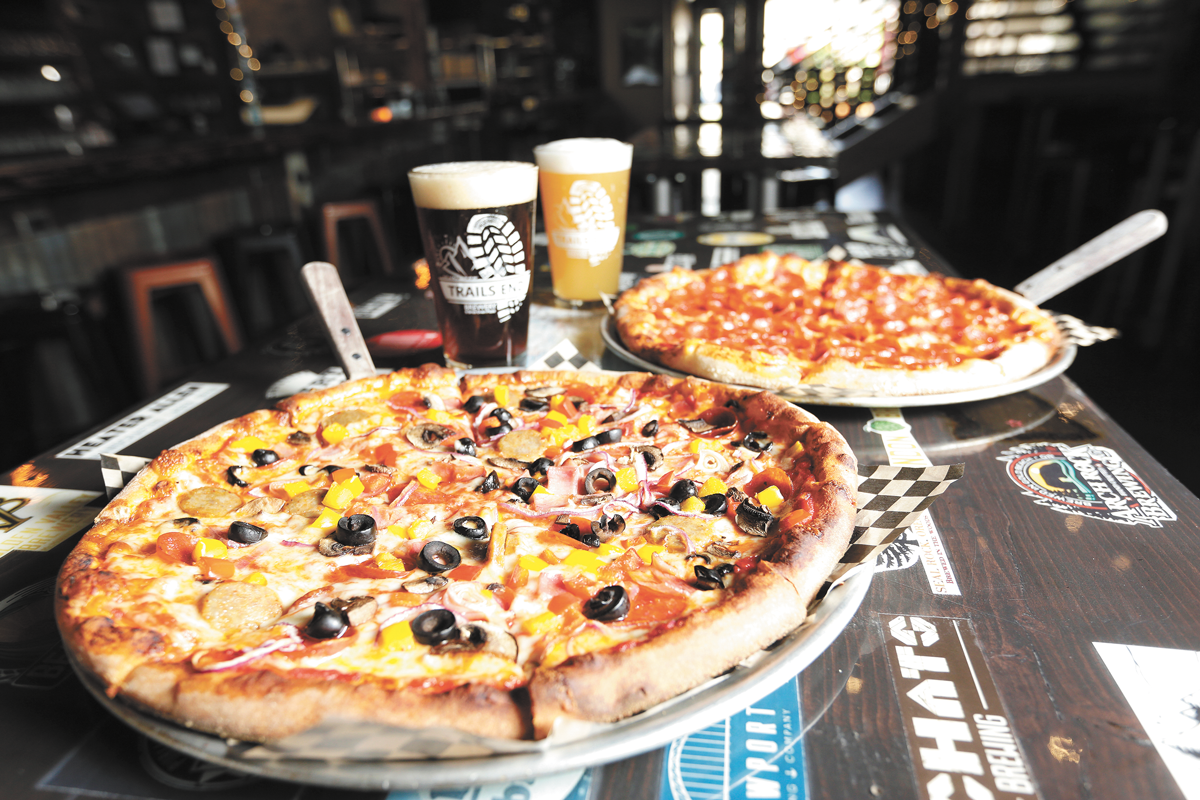 Young Kwak photo
Grab a pizza and a pint at Trails End Brewery.

It didn't take a New York Times article on Coeur d'Alene to tell locals what they already know: The region is a special place.

Part of that is its food and beverage industry, which — although struggling to find employees like elsewhere in the nation — also grew this past year for many existing and would-be restaurateurs in North Idaho.

Trails End Brewery (trailsendbrewery.com) isn't exactly new — we wrote about them in the Inlander back in October 2018 — but it lacked a brick-and-mortar location until spring 2020. Trails End's new spot between a hair salon and adult novelty shop is memorable and, say the owners, the perfect fit.

They're thrilled with the Highway 95 location, says Kirk Chaffin, who started the business with partner Jeanine Raymond and takes any ribbing about their proximity to the Adam & Eve store in stride. In addition to plenty of room for its 10-barrel system, Trails End can seat nearly 150 upstairs and down combined. Grab a seat along the bar to watch your pizza cooking in the wood-fired oven. Try the Trails End ($17/$23) with red sauce, pepperoni, sausage, Black Forest ham, mushrooms, red onions, red and yellow bell peppers, and black olives, paired with one of their German-style beers, like the refreshing Alpine Haze.

Or take a table and check out the map of breweries that inspired the business name.

"It's all about what you do at the end of the trail... You get cell service, and you Google breweries," explains Chaffin.

Although it's only filling growlers to-go right now, Chalice Brewing (chalicebrewing.com) has opened in downtown Coeur d'Alene with two beers currently on tap. The brewery is partnered with Evans Brothers to make a rich, Ethiopian coffee porter and renovations are underway at the Sherman Avenue building where the plan is to have a sit-down place.

Also on Sherman Avenue, after a public venting of frustration with Washington's pandemic restrictions, Stormin Norman's Shipfaced Saloon (storminnormansshipfacedsaloon.com) is expanding past its flagship Spokane Valley location. Owners hope to get their Coeur d'Alene location open by the end of July.

Farther east on Sherman Avenue, the Hogfish Bar has rebranded as Backwoods Whiskey Bar (facebook.com/backwoodswhiskeybar); and nearby, Schmidty's Burgers (facebook.com/schmidtysburgers) is still getting up-and-running after a fire leveled its Fourth Avenue spot in January 2020. A recent social media post from the burger joint mentions a September reopening.

And yet another business is calling East Sherman home, and they've got game (or you can bring your own). The Blue Shell (theblueshellcda.com) might be Coeur d'Alene's first establishment dedicated to arcade and tabletop gaming and — bonus points — it serves lots of local and regional beers in a chill space.

Business has been good for La Cabaña, which started on Seltice Way in Post Falls more than 15 years ago. Restaurateur Felix Cabrera has added several locations since then, including in Rathdrum, Spokane Valley and most recently Post Falls' Riverbend Commerce Park.

Panhandle Cone & Coffee (coneandcoffee.com) started six years ago in Sandpoint, then launched a shop in Moscow, and has finally brought its artisan ice cream to Midtown Coeur d'Alene, just in time for summer.

There's a whole barn full of pies next to Curley's in Hauser Junction. Olive's Pastry at the Pie Barn (facebook.com/olivespastrypie) has actually been making pies for a few years now, easing into a brick-and-mortar location and a larger following on social media. Although sweet pies like huckleberry and Dutch apple (made with a touch of UpNorth Distillery's Big Kid Cider) are a specialty, Olive's also does savory pies, sweet breads, tarts, cheesecake and a range of specialty items.

Speaking of pizza, get that and more at Flame & Cork's (flameandcork.com) gorgeous new home on Government Way just up the road from where it started in 2016. Try the charcuterie ($16), Nico's pizza ($16) with prosciutto and arugula, or a good-deal lunch special like the veggie calzone ($12).

Cranberry Road Winery (cranberryroad.net) has moved into the former Brazilian steakhouse in Coeur d'Alene's Riverstone development with what owners Chris and Maria Tiffany call a relaxed and family-friendly experience.

Look for fine dining options such as steaks and seasonal seafood like the halibut linguine ($29), as well as appetizers, salads and wood-fired pizza, plus a few items just for kiddos.

New labels are in the works for the winery, which the couple started in 2009 to make cranberry wine. They're up to 16 varieties, two of which are still cranberry-based.

Cranberry Road Winery was originally located in Grays Harbor, Washington, but the Tiffanys decided to move their small winery and restaurant to Idaho in general and Coeur d'Alene specifically.

His great-grandfather was from Coeur d'Alene, says Chris, and many of their customers had connections to the area. There was another reason, however, and that had to do with Washington's regulations stemming from the pandemic shutdown.

"To be blunt, [Washington Gov. Jay] Inslee was the best salesperson Idaho ever had," says Chris. ♦