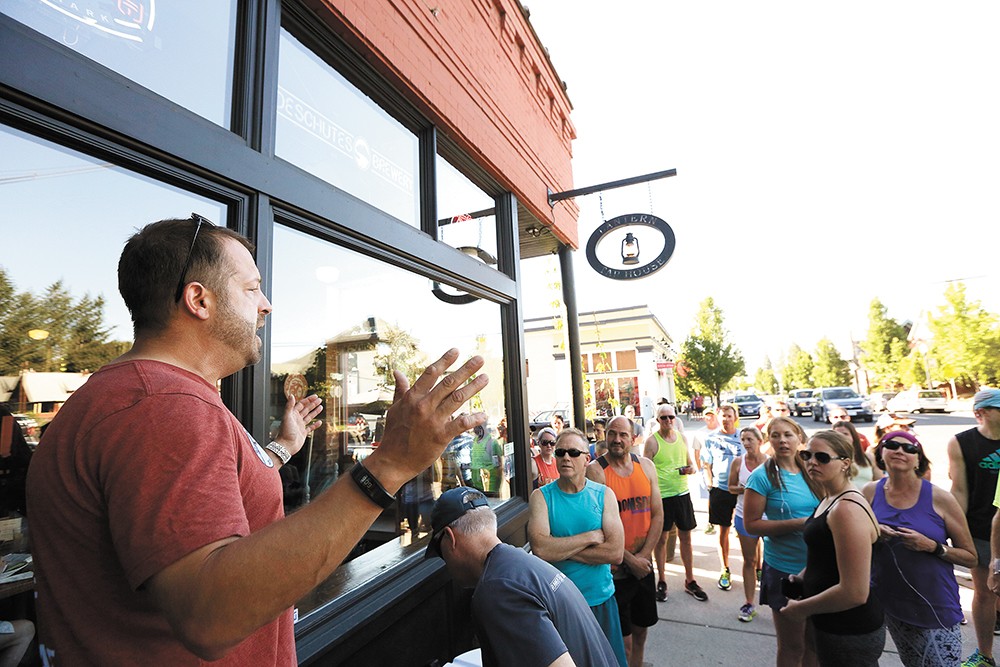 Young Kwak
Runners gather outside the Lantern Tap House in the Perry District for a Tuesday evening run.

It was 10 years ago that Andy LeFriec and a group of his friends formed their own running club. Named the Spokane Distance Project, the club was dedicated to pushing members to their finest. LeFriec and others wanted to be able to run at a nationally competitive level.

The runs were challenging. While any of them could have trained by themselves, LeFriec said the support from each other helped push them through the hardships of their runs. The bond of camaraderie was as strong as ever.

"It's a lot easier to suffer in a group than it is alone," LeFriec says. "Misery loves company."

If you're looking for a way to meet people while getting in shape, then joining a local running club might just be your thing. Running clubs offer the chance to surround yourself with a community who'll support you while running.

Here's a list of some clubs in the Inland Northwest:

Bloomsday Road Runners Club: This club organizes multiple races and weekly trail runs along with an annual 12K. The group serves as an umbrella organization for many running clubs in town. Check out their website (brrc.net) for a list of marathons, events, schedules and local groups to join.

Downdraft Running Club: Spokane isn't the only scene for pub runs. Meet at 6 pm on Thursdays at Downdraft Brewing in Post Falls for either a 3K or 5K run. Membership is free but participants must register at info@downdraftbrewing.com or at the tap room before the event. All those who participate can enjoy $3 pints after the run.

Fleet Feet Sports: Not just a series of local and running and fitness equipment shops, the business also offers a variety of racing and running groups to join. There's a wide range of activities to participate in — from its No Boundaries 12-week programs that trains people from all skill levels for their first 5K to a newer trail running group.

Flightless Birds: Runs start at Barrel House Pub & Pizza in Cheney every Tuesday from April to November. Runs go for 3-4 miles and start 6 pm, with later meeting times in the hot summer. Everyone is encouraged to run at their own pace, but stick around for post-run food and drinks. Those who participate in a single run will be allowed to enter in the group's end-of-the-year half-marathon.

Flying Irish Running Club: What was once a small club for local runners has grown into the largest social running club in the country. Runs average 300 participants and offer a great way to meet new people. Earn the right to wear a club shirt by completing six runs and telling an Irish joke on stage. Meet the Flying Irish at 6 pm at O'Doherty's Irish Grille every Thursday, March through November.

Lantern Tap House Run Club: Looking for another run that ends at a pub? Then join the Lantern Tap House Running Club on most Tuesdays at 6 pm. Runners may choose from one of two runs: a 3 or 5-mile run. Average attendance is about 100 runners who are more than welcome to stay for a pint after a jaunt. Extra runs are posted on the restaurant's website regularly.

Liberty Lake Running Club: Meet at the Twist Cafe on Thursdays at 6 pm for a 3-mile run. Weekly runs occur March through October. Some months feature a few extra themed runs, such as crazy sock runs, a strolling storytime for kids and a Halloween run.

Manito Running Club: This affiliate of the Bloomsday Road Runners Club has been meeting for more than a decade at the 18th and Grand parking lot at Manito Park. Come join the group of 20 runners on Saturdays at 8 am for a 5 to 6-mile run, followed by coffee and socializing at Rockwood Bakery.

Monterey Cafe Running Club: Formerly known as C:/NextIT/Run, this group meets at the Monterey Café every Tuesday at 6 pm between March and Thanksgiving for a 3 to 5-mile run. Collect the coveted group T-shirts after your fifth, 37th, 67th, 101st and 139th runs. Afterwards join the group for pizza and "recovery beverages."

Palouse Road Runners Club: Come join the Palouse Road Runners for a variety of runs in the Moscow area, including a weekly social run every Thursday at 6 pm at Friendship Square or participate in one of their four annual races. There's a huge mix of events and activities for people in the club to choose from.

SoHi Running Club: This casual South Hill (SoHi) running club meets at Miguel's Mexican Restaurant every Monday at 6 pm, rain or shine, even on holidays. Runs average a dozen members in attendance. Chips with salsa along with drinks afterwards are always sure to follow the group's 4 to 5-mile run.

Spokane Distance Project: This club offers a solid support group for men who are serious runners. Dues are $50 twice a year and include membership in the USA Track & Field organization.

Spokane Swifts Running Team: This club, celebrating its 10th anniversary, is for women who love running and want to improve their fitness in the company of other women. Serious runners of all ages are welcome. The current group consists of people anywhere from 20-70 years of age. The Spokane Swifts' goal is to encourage and empower women through running.

Spokane Valley Running Club: Runs start at 6 pm on Mondays at the Spokane Roadhouse and go for 3-8 miles. The group is aimed at all skill levels and encourages new people to join. As they say, why run alone when you can run with friends? ♦