Sheriff Knezovich and challenger Doug Orr agree on at least one thing: new civilian oversight for the agency

Young Kwak
Sheriff Ozzie Knezovich says introducing civilian oversight is one of the many challenges facing the agency.

Under the lights of a televised debate

last week, Spokane County Sheriff Ozzie Knezovich and his challenger, Spokane Police Det. Doug Orr, appear physically uncomfortable sitting so close to each other. Both listen politely as a moderator from the League of Women Voters explains the rules. They acknowledge each other as little as possible, staring straight ahead.

"I'm running for sheriff because we can do better," Orr says in his opening volley.

"[Orr] does not know this Sheriff's Office," Knezovich counters a few minutes later, "nor does he have any knowledge of leadership."

Both Knezovich and Orr consider themselves Republicans. Both have embraced the county's "Blueprint for Reform," a Smart Justice-driven plan to reshape the local criminal justice system. Both have campaigned on reducing property crime, rebuilding staffing and fixing an overcrowded jail.

But both would also rush to note their many differences.

While Knezovich has faced some vocal opposition from disgruntled union leaders and community members, the sheriff argues he has proven he can make the many important and unpopular choices that need to be made, including asking for tax increases. He still walked away with 72 percent of the primary vote.

Orr contends the sheriff has proven more a bully than a leader, sacrificing the trust of his deputies while falling behind on training and technology. Orr pitches himself as an intellectual alternative — a "Cop 2.0" with a badge, a gun and a Ph.D.

In the final weeks of the campaign, both Knezovich and Orr have shifted the public debate toward civilian oversight, deputy-worn body cameras and accountability.

"It translates to increased public trust," the sheriff says of oversight. "That's what is so desperately needed right now."

Since taking office in 2006

, Knezovich has earned both respect and scorn over his firing of several deputies for misconduct, ranging from intentionally humiliating inmates to overcharging for security shifts to having sex while on duty. Arbitrators have in some cases forced him to rehire those deputies, and he has repeatedly failed to push through new legislation to reinforce those types of termination.

Knezovich takes the simple stand that deputies should not be dishonest or commit crimes. He explains that the department has a Citizen Advisory Board, but additional civilian oversight would bring new perspective to any disciplinary disputes. On Tuesday, he asked county commissioners to consider partnering with the city's Office of Police Ombudsman to monitor the Sheriff's Office.

"Done correctly," he says, "the ombudsman becomes a way for us to give that transparency and the proper amount of scrutiny to what we're doing internally. ... I'm doing this because I see the value of it."

Orr, a detective with the Spokane Police sex crimes unit and a part-time criminal justice professor at Gonzaga, has criticized the sheriff for being slow on oversight, lagging at least five years behind the efforts at the Spokane Police Department. Orr's greatest coup in this campaign has been securing the endorsement of the Spokane County Deputy Sheriff's Association, arguing that the deputy union's support will prove vital to introducing any new oversight.

Orr explains that he had to go before a commission of citizens before being hired for a police officer job in South Carolina. Giving the public ownership in officer hiring helps set the tone for the force and how they engage the community. It also gives the public a stake in disciplinary actions.

Body cameras should also play a large role in deputy accountability. Knezovich, who recently conducted a two-month trial, says a full commitment on body cameras hinges on a pending state Attorney General decision on recording issues, as well as getting funding from the county. Orr agrees the county should have had the cameras "yesterday."

"That's what I'm going to bring to Spokane," Orr says, later adding, "Why hasn't the county done this? The sky's not going to fall. Let's do this." 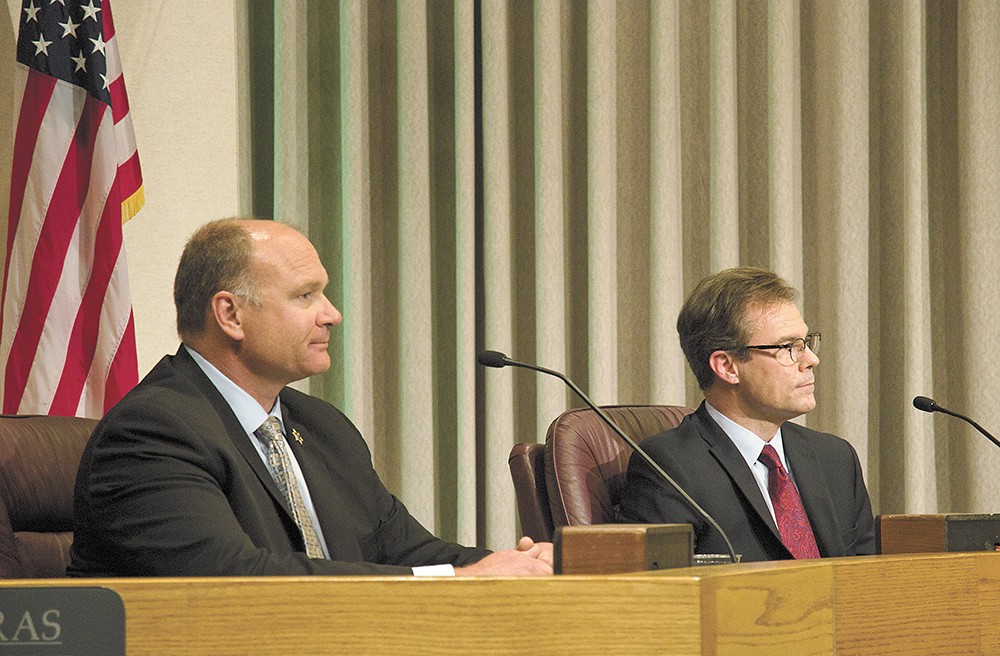 , who has served since 2009, confirms he has discussed expanding the office to cover the sheriff's agency. Providing new oversight for the county would likely start as a "fee for services" model in which the county contracts the office for certain services such as complaint tracking, use-of-force auditing, Internal Affairs certifications or other actions.

"Everybody seems to be open to the discussion," Burns says. "There are a couple major questions in my mind."

Burns says his office currently operates for about $250,000 a year. He believes a joint city-county office could potentially double that, but expects there would be an opportunity to cut shared expenses on joint staffing and infrastructure. One of his first steps toward expanding the office would be conducting a study to see how much time each service tends to take.

Officials would also have to decide how the new Ombudsman Commission might factor into a joint office. That five-person city board holds its first meeting Monday. But Burns says his office certainly could provide an enhanced level of review that has proven valuable to rebuilding public confidence in the city department.

"In regards to trust and transparency, I'd say it's priceless," he says, noting, "[But] the county commissioners and the sheriff need to drive this train."

County Commissioner Todd Mielke says the idea of partnering on the ombudsman office has come up before. He supports the concept, but emphasizes that oversight expenses have to balance against a wide variety of new justice reforms underway.

"We have finite resources," he says, asking, "What serves the public interest better, an ombudsman or body cameras?"

Mielke, who has endorsed Knezovich and sits on the new county Law and Justice Council, says commissioners have already been struggling to find money to hire additional deputies, increase jail rehabilitation programing and expand pretrial assessment services. He notes he has not heard much public demand for extra civilian oversight at the Sheriff's Office.

"We are open-minded," he says, "[but] we've got a lot of balls we're juggling in the criminal justice arena."

Some of those challenges include

an overcrowded jail and a criminal justice system that increasingly takes on the care of defendants with severe mental health issues. Knezovich believes the county needs to rebuild its jail facility, which would take a significant investment but would include new rehabilitation programs. He says the current jail struggles to care for inmates with mental health issues due to funding cuts at state facilities.

"We now know that putting them in jail is not productive at all," he says, calling for increased triage of inmates into mental health facilities. "Those programs need to be expanded."

Orr says he represents significant change at a time when the Sheriff's Office needs to redefine itself under a newer, more nuanced mission. Knezovich says he has provided firm and forward-looking leadership.

During the recent debate, both men repeatedly outlined the high expectations and difficult tasks ahead of whoever takes the office: replacing retired deputies, cutting overtime expenses, replacing the aging dispatch system. It's a long list, the sheriff tells the audience.

"There are many things we need to be paying attention to." ♦