Tom Brenner/The New York Times
President Donald Trump delivers remarks ahead of a meeting with members of Congress in the Roosevelt Room of the White House in Washington, July 17, 2018. Trump on Tuesday said he “accepts” the conclusion of his own intelligence agencies that Russia interfered in the 2016 election, just one day after he appeared to believe President Vladimir Putin of Russia and Putin’s “powerful” denial during a summit in Helsinki, Finland.
By Eileen Sullivan
© 2018 New York Times News Service

WASHINGTON — President Donald Trump said Wednesday that Russia was no longer targeting the United States, contradicting his own intelligence chief just a day after promising that his administration was working to prevent Kremlin interference in the upcoming midterm elections.

Trump’s comments were the latest in a dizzying collection of conflicting statements from Trump since he emerged from a private meeting with President Vladimir Putin of Russia on Monday in Helsinki. And they directly contradict assertions from Dan Coats, the director of national intelligence, who has repeatedly said that Russia continues to try to interfere with American democracy.

On Wednesday, when the president was asked whether Russia was “still targeting” the United States, Trump said: “No.”

The president’s changing statements about Russia’s intentions toward the United States underscore his pattern of questioning his own intelligence agencies. And it also increases pressure on Trump to disclose details about what he and Putin discussed in their two-hour private meeting, after which Trump appeared to capitulate to the longtime U.S. adversary.

Trump’s latest vacillation Wednesday drew outrage, including from his own party. 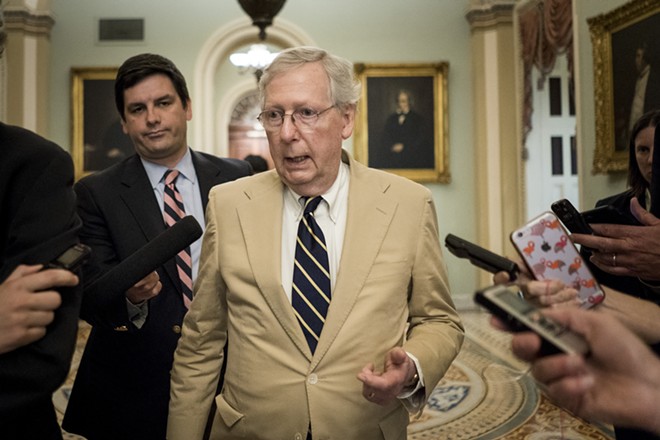 Erin Schaff/The New York Times
Senate Majority Leader Mitch McConnell (R-Ky.) speaks to reporters on Capitol Hill in Washington, July 16, 2018. McConnell, who rarely grants hallway interviews in the Capitol, uttered three terse sentences: “The Russians are not our friends. I’ve said that repeatedly, I say it again today. And I have complete confidence in our intelligence community and the findings that they have announced.”
“I’m dumbfounded by the statement he does not believe that the Russians are still up to it,” Sen. Lindsey Graham, R-S.C., said Wednesday. Graham said ignoring the threat posed by the Russians was “political malpractice” if the threat was real. “I believe it’s real,” he said.

Sen. Richard Burr, R-N.C., the chairman of the Intelligence Committee, said he had no reason to doubt the warnings from intelligence agencies about November’s midterm elections. “He ought to look at the intelligence,” Burr said of Trump.

Sen. Mark Warner of Virginia, the top Democrat on the Intelligence Committee, said Trump’s rejection of U.S. intelligence put the country’s security at risk. “It raises questions not only about Trump’s credibility but his commitment to our nation’s security,” Warner said.

In brief remarks before a Cabinet meeting Wednesday, Trump said Putin was not happy because “there’s never been a president as tough on Russia as I have been.”