NEWS: Sen. Kamala Harris (D–California), finally announced her long-expected candidacy for president on Monday, joining an already crowded field of Democratic contenders for their party's nomination in 2020. Harris, a senator since 2016 who previously served as California's attorney general and a district attorney in San Francisco, will hold a kickoff rally in Oakland, her hometown, on Sunday. (New York Times)

SPORTS: Filip Petrusev, the 6-foot-11 freshman, is an underutilized resource on Gonzaga's basketball team, Will Maupin argues. But just wait: he'll likely have opportunities to shine further down the road.

DACA lives
In more Supreme Court-related news, the justices opted not to take any action on the Trump administration's appeals on implementing its plan to shut down the Deferred Action for Childhood Arrivals (DACA) program, which shields roughly 700,000 young undocumented immigrants from deportation. (Federal judges had previously ordered the administration to maintain key parts of the program.) The justices may still decide to take up the case, but it wouldn't be argued until October. For now, the program is still in effect. (Washington Post) 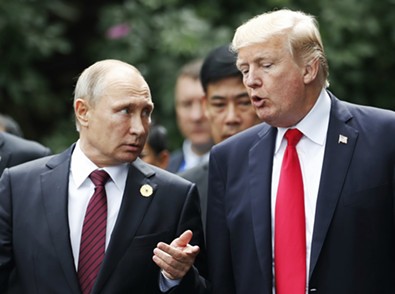 Jorge Silva/Pool via The New York Times
President Donald Trump and President Vladimir Putin of Russia converse as leaders participating in the APEC summit took a group photo, in Danang, Vietnam, in 2017.
Lucrative sanctions
Last month, the Trump administration announced that it was lifting sanctions against a trio of Russian companies, pitching the action as a tough-on-Russia move that extracted considerable concessions from Oleg V. Deripaska, the oligarch that controls the companies. But a binding confidential document signed by both sides indicates that the deal frees Deripaska from hundreds of millions of dollars in debt and leaves him with majority ownership in his most prized company. (New York Times)

Off to Maryland
Trisha Wolford, the assistant fire chief at the Spokane Fire Department, is soon leaving for a job at the Anne Arundel County Fire Department in Maryland. She was the first woman to be assistant chief in Spokane, a position she's held since 2017. (Spokesman-Review)