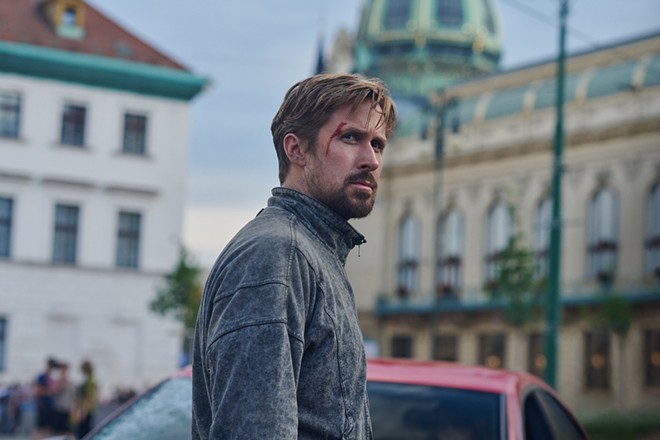 It's a testament to the dominance of the Marvel Cinematic Universe that two of the highest-grossing movies of all time were made by directors who have no discernible style or vision. While working under the supervision of MCU mastermind Kevin Feige, brothers Anthony and Joe Russo corralled dozens of characters into the grand superhero epics Avengers: Infinity War and Avengers: Endgame. Their post-MCU work has been decidedly less impressive, first in the heavy-handed, overly stylized addiction drama Cherry, and now in the generic, disposable action movie The Gray Man.

Based on the first in a series of novels by Mark Greaney, The Gray Man is meant to launch a franchise, and its reported $200 million budget makes it one of the most expensive Netflix movies to date. As much as the MCU is a corporate product, it's often able to connect emotionally with fans, creating memorable characters that inspire more than just brand loyalty. The characters in The Gray Man aren't aliens or mystical beings, and they don't have superpowers, but they come across as less human than even the most minor players in the Russos' Marvel movies.

The CIA assassin codenamed Six (Ryan Gosling) eventually delivers a sad story about the upbringing that led him to the prison where he was recruited by the government, but it sounds like a rehearsed speech rather than a heartfelt confession. That's pretty much his only moment of vulnerability, either emotional or physical, in the entire globe-trotting adventure. Six is hunted by some of the most dangerous and resourceful people on the planet, but there's never a single moment when it feels like he's in danger.

After years as a devoted operative, Six goes rogue after a mission to take out a target who reveals that he's a fellow CIA asset. Before dying, he hands Six a necklace containing an encrypted disc, with incriminating evidence against new CIA boss Denny Carmichael (Bridgerton's Regé-Jean Page). Carmichael, who's already planning to eliminate the program that employs Six, is determined to destroy the evidence and terminate anyone who's aware of it.

That's just an excuse to set the plot in motion, and Page has surprisingly little screen time, making him an underwhelming adversary for Six. The actual villain is CIA contractor Lloyd Hansen (Chris Evans), hired to take out Six and acquire the disc by any means necessary. Evans puts on a weaselly mustache and berates a lot of underlings, but he never convincingly embodies the supposedly ultra-dangerous psychopath that Carmichael's second-in-command, Suzanne Brewer (Jessica Henwick), warns him against. Evans was far more effectively diabolical as a wealthy schemer in a cozy sweater in Knives Out.

Six gets help from his CIA handler, Dani Miranda (Ana de Armas), and a few other longtime allies, who mostly serve as plot devices and/or cannon fodder. The real appeal of The Gray Man isn't the story or the characters, but the major action set pieces that the Russos ought to be adept at crafting after helming four Marvel blockbusters. Even with the massive budget, The Gray Man doesn't come close to the scale and creativity of the franchises it's copying, from James Bond to Jason Bourne to Mission: Impossible.

The action bounces from one international locale to another, but they all blend together into an indistinguishable mush of car chases and shootouts. This is the kind of movie that should be designed to be appreciated on a big screen, but the Netflix feature will barely hold viewers' attention on their home-viewing device of choice. "Gray" is the right word for such an empty, forgettable piece of would-be studio intellectual property. ♦