Your pop culture guide to Pagliacci 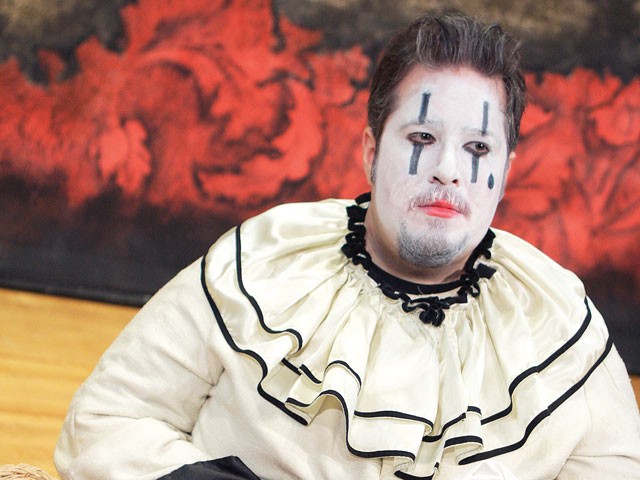 Let’s do some math: a century-old opera unhappy clowns a language other than English. Not your standard equation for indulgent time-wastage.

But infidelity murder jealousy totally is, and Pagliacci has all three.

It may be 118 years old, but Ruggero Leoncavallo’s play-within-a-play has enough Italian drama to rival MTV’s Jersey Shore. We’ll prove it.

CANIO |  Jealous, insecure and impulsive. Canio’s a great performer, but kind of a crappy person, just like Kanye West.

TONIO |  A tattletale and a sore loser. Tonio’s something of a joke, but nonetheless manages to stir things up, like Sanjaya on American Idol, Season 6.

SILVIO |  Sexy, young, and in love with Nedda. This turns out to be a major setback for Silvio’s future, just like marrying K-Fed was for Brittney Spears.

A small theatrical road company roams Italy in 1865-ish. Canio is the leader, Nedda is his wife; Tonio is another actor.

The troupe arrives on the outskirts of a Calabrian town. They set up camp and mingle with local residents. Amid conversation, a villager with a defective social filter jokingly insinuates that Tonio has a crush on Canio’s wife.

Canio turns hostile, threatening any compromising talk about his woman (just like that time on Tool Academy 3, when Neander-Tool accused Kyle’s girlfriend of being a bleeping whore and Kyle freaked out).

Rattled by her dogged husband’s vehemence and suspicion, Nedda wanders outside and sings of lost freedom. Like Gretchen from The Real Housewives of Orange County, Nedda is way too young for her husband (Gretchen “loved” fiancé Jeff, 56, but we all saw the “Naked Wasted” episode, with multiple tequila shots and the attractive 22-year-old boy vying for her attention).

Ever the Stage 5 creeper, hunchbacked Tonio — who does in fact have a thing for Nedda — lurks in the background. He decides the moment is ripe for macking.

Tonio attempts to seduce Nedda, which totally grosses her out — just like that scene in Dodgeball, when White Goodman tells Christine, “I think we should date,” and Christine replies, “I just puked a little in my mouth.”
Pride injured, Tonio goes off to sulk.

Then Nedda’s actual adulterous lover, a townie named Silvio, rushes in. He pleas with Nedda to elope with him — immediately!

So Silvio begs a little harder — and just as fickly as the time in Gossip Girl when Serena changed her mind after five seconds of moral debate over whether she should elope with Gabriel to Spain, Nedda changes her mind, agreeing to run away.

He’s all like, “Ha! Karma!” and runs off to tattle (just like that time on Hills spin-off “The City,” when male model Alex, a rejected suitor, digs up dirt on Whitney’s current boyfriend, Jay, and narcs him out).

Canio storms onto the scene, ready to cut someone —but Silvio runs away before Canio identifies him (like in Season 5 of Desperate Housewives, when Bree’s husband Orson almost caught her in bed with Karl, the sleazy lawyer man-slut).

Nedda refuses to tell Canio who her secret boo is, and leaves to get ready for the show.

Poor Canio has now not only (a) been played for a fool, but (b) must dress up like one.

In an astonishing coincidence, Leoncavallo’s play-within-a-play plotline uncannily mimics the play itself.

Youthful wife Columbina (played by Nedda) placates her husband, Pagliacci (Canio) — the dramatic irony being that we, the audience, know that Nedda’s performance has hidden motives. (This is just like that time on Season 5 of The Hills, when Heidi becomes suspiciously domestic for a night and seduces her husband, Spencer. But all she really wanted was to get pregnant.)

According to the script, Pagliacci is supposed to accept the young couples’ true feelings for each other.

Far too disgraced, the tragic clown can’t bear being subjected to relive his nightmare within the play. He loses it, demanding that Nedda reveal her secret squeeze.

So Canio goes off the deep end, stabbing Nedda in front of everyone (like that time on Season 1 of Desperate Housewives, when Carlos went ballistic after discovering that Gabby had cheated on him with that chiseled Latino gardener).

Silvio, seeing his damsel in distress, takes the bait and emerges from the safety of the audience like a lamb to slaughter.

Even The Bachelor can’t compete with an ending like that.