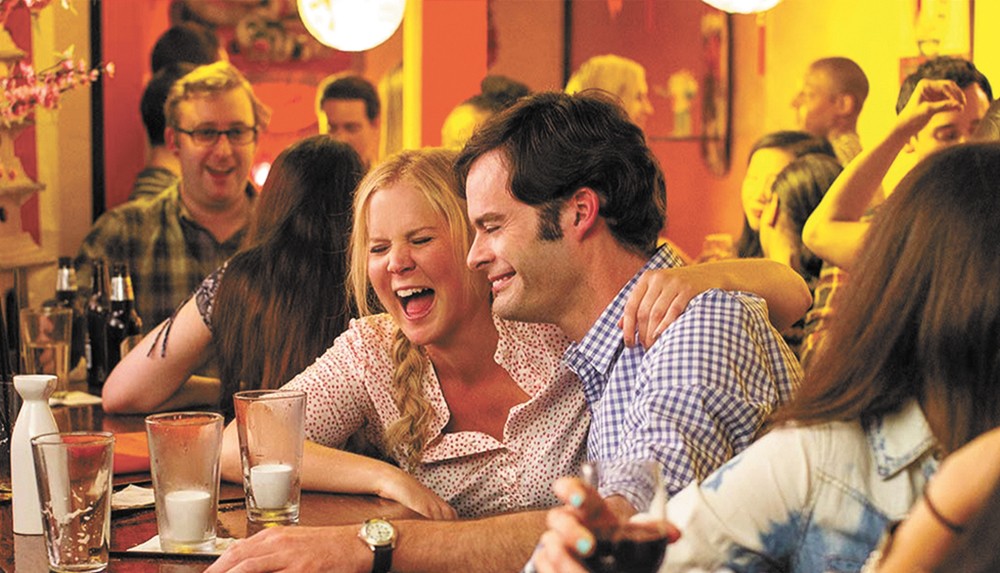 Amy Schumer is a bad date you'll learn to love in Trainwreck.

About midway through Trainwreck,

Amy Townsend (Amy Schumer) gets a particularly emotional moment — sad, darkly funny and shot through with the messiness of her character. And all I could think was, "Where the hell is the whole movie that's actually about this character?"

In addition to starring, Schumer wrote the script for Trainwreck, casting herself as a monogamy-averse magazine writer who doesn't know quite how to handle herself when she gets involved in a real relationship with an interview subject, nice-guy sports orthopedic surgeon Aaron Conners (Bill Hader). The story is predicated on the complicated relationship between Amy and her alcoholic father (Colin Quinn), and it's clear that Schumer wants to say something about the familial baggage that can damage our chance for happiness.

But the directing chores were handled by Judd Apatow, whose sensibility — as funny as it can be in movies that he writes for himself like The 40-Year-Old Virgin and Knocked Up — feels all wrong here. His is a loosey-goosey, throw-every-punch-line-you've-got-at-the-wall approach, resulting in stuff like a prominent role for LeBron James as Aaron's improbably sensitive guy pal, and cameo appearances in a kind of excruciating relationship "intervention." As much as Schumer occasional tries to subvert the idea that this is a conventionally structured romantic comedy, Trainwreck keeps stubbornly turning back into a conventional romantic comedy.

It's still occasionally very funny, with outrageous set pieces involving awkward "sexy talk" between Schumer and John Cena, and Schumer's feminine-hygiene-centric rant about relationship deal-breakers. The frustration comes from seeing a genuinely spiky story buried beneath the urge to indulge every improvisational tangent.

Every time Trainwreck seems like it's about to show us how much it will take a messed-up woman like Amy Townsend to have her happily-ever-after, it steers us into a parade of random gags. She's more interesting when she's crying than when we're laughing. ♦

Trainwreck is not showing in any theaters in the area.