By writing and singing, Liz Rognes is healing her wounds. 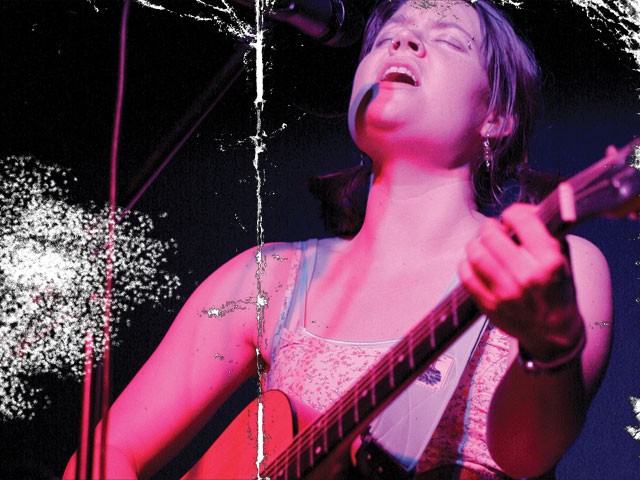 Young Kwak
Liz Rognes playing in May with the Revolving Music Project.

The peachy floral of her skirt, the softness of her boots, the flicker of her nose ring — she casts a gentle silhouette on the dimly lit walls of the Rocket Bakery. Liz Rognes has a sweet, friendly demeanor, both onstage and in person. It’s almost impossible to see the cracks.

Last year, the singer/songwriter from Minnesota packed her bags and enrolled in Eastern Washington University’s Master of Fine Arts creative writing program, leaving a troubled past behind her. Six years ago, this former prom queen was in an eating-disorder treatment center, drunkenly confessing that she was sneaking in soapy vodka via a shampoo bottle. And weeks before that, she was lying in an intensive care unit recovering from a dangerously close suicide attempt.

Back then, a good day was measured by whether the scaled tipped 100 pounds, whether she had been kicked out of an all-you-can-eat buffet for eating too much (this happened twice) or whether she had blacked out the night before.

She’s battled through alcohol and drug dependency, achieved six years of sobriety, shaved off her dreadlocks, lost a friend to cancer and had her heart broken by her first girlfriend.

This isn’t your polite, everyday conversation. Unlike Rognes herself, it’s not always pretty.

“I think writing for me has been healing,” she says. “Blogging is almost like stream-of consciousness writing.”

Rognes writes when she cannot speak and sings what cannot be said. And nothing about her smile or Pepto-Bismol pink sunglasses gives it away.

“Having a creative outlet of some kind is what’s necessary,” Rognes says. “It’s what energizes me. I’ve been through some stuff and gotten out of it. All of it all plays into the way I feel about art.”

The classically trained vocalist began writing and performing in coffee shops during college. Her music leads with her articulate soprano voice — and she has an incredible range. The pitch of her voice and her scat-like tendencies sound like a little girl playing with her dolls, or a grown woman singing about the ghosts of past lovers.

“The content of my songs are pretty personal,” she says. “I’m in the process of sorting out what I call myself and my recovery. I try to take something intimate, take something personal and turn it into something that people can relate to. To make a personal story, publicly resonant.”

In 2009, she compiled her lovesick stories and diatribes with Minnesota producer Dan Zamzow into an album called Red Flags. The entire work is reminiscent of Jewel’s Pieces Of You.

The openly queer singer kicks things off on the sultry side with a song called “In Your Hands.” The album’s title track showcases Rognes singing coyly about the faults and misgivings of lovers, while “Solid Ground” is a bluesy number that gives a needed variety to her songwriting. At times her voice and songs have a childlike quality to them, another similarity to Jewel’s debut album.

“I wasn’t sure if I even wanted to get into the music scene here,” she says. “But I couldn’t not play music. I enjoy getting to share my songs with people, and I’m always surprised they actually want to listen.

“I really occupy the space in between, and learning how to live in this in-between space isn’t so easily defined. So I write about it.”

The personal, public and private side of her life may feel at odds, but this is her story to tell, the best that she knows how. And judging by her album, she seems to have lost something in the Midwest. A lover? A lifestyle? Herself? Either way, it will be exciting to hear what’s to come of her meanderings and rebirth in Spokane.