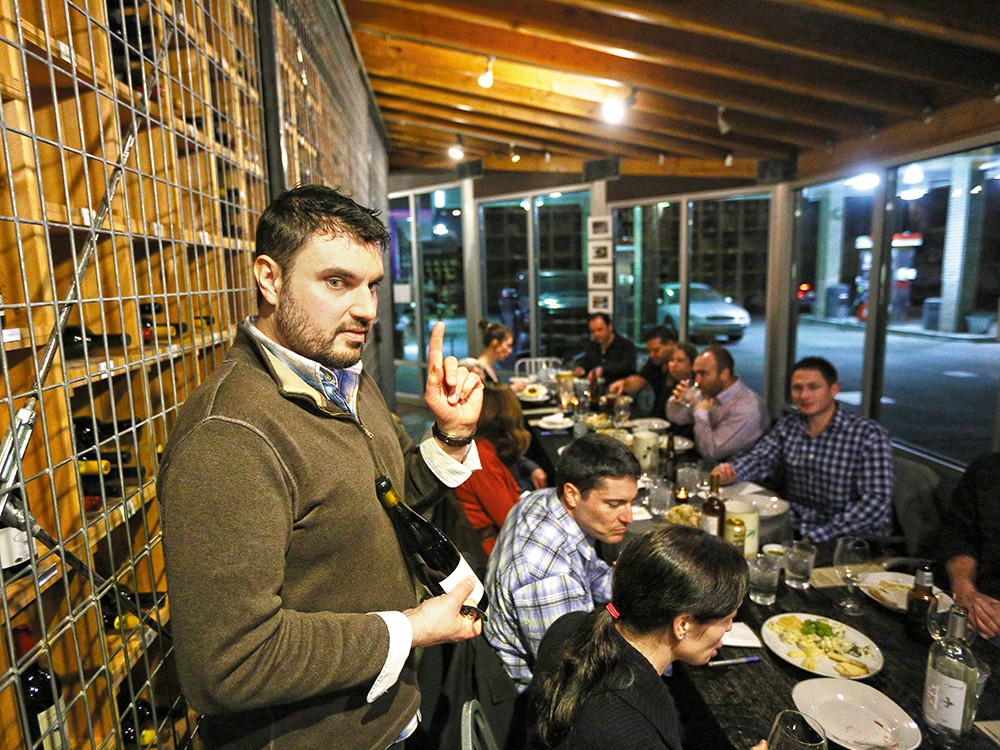 The room looks just like a college lecture hall that’s been set up for an exam, except for the sets of empty wine glasses placed at each seat, along with pens, bottled water and class workbooks. Long, narrow tables are set up in rows of six with a wide aisle down the middle, and an overhead projection screen at the front of the room glows white with the title of the class: “What’s Your Beer Style?”

It’s an undergrad’s dream course, but this isn’t a university. It’s a room at Total Wine & More, a warehouse-style adult-beverage purveyor.

It’s been almost a year since the voter-approved changes on the sales of spirits were enacted in Washington. While those changes didn’t turn out the way many people expected, (additional taxes made spirits pricier overall) most noticeably, hard liquor became easier to buy, popping up on the shelves of grocery stores and some local beer and wine specialty stores. Big-box retailers also rushed in to take advantage of the new rules, Maryland-based Total Wine & More among them.

When the national company opened its new booze megastore in North Spokane last November, the ability to become better educated about what’s in your stemmed glass or beer stein also grew.

Young Kwak
Leading up to Washington’s privatization of spirits sales, and continuing still, has also been a growing interest in the craft beer brewing movement, as the number of breweries both nationally and statewide has dramatically increased in the past five years. Washington also continues to hold strong as one of the top U.S. wine-producing states, with big jumps in the number of wineries across the state in the same number of years.

It’s not just an increase in things to drink. There’s also more interest from drinkers who want to know more about what they imbibe.

This past Thursday evening, students attending Total Wine’s monthly beer education class ($15) filed in and were mostly quiet as they waited for it to begin. But by the end of the class — and 12 samples of beer in — these pupils began to mingle; sharing whether this was their first time coming to a class, or their second or third. As the class-goers fanned out across the store to more confidently peruse the beer section, many also mentioned their intent to come to future classes.

“You can try a lot of beers for a low cost and you might buy something you normally wouldn’t have,” says Damon Carlson, who came to the beer class with his dad Rick. Both had been to a few other sessions on beer before that night.

Total Wine’s beer manager Jeff Jordan, who led the interactive Thursday-night beer session covering the basic characteristics of different styles of beer, says the store’s monthly two-hour wine ($25) and beer workshops focus on a different topic each month so customers can learn something new at each session.

Before Washington voters approved the privatization of liquor sales back in 2011, a completely unrelated measure was approved by the state Legislature to allow grocery stores to host beer and wine tastings under strict specifications. This rule is why, for example, during a shopping trip to Trader Joe’s, you can snag a sip of wine from a free sample area.

Specialty wine, beer and spirits retailers — like Total Wine & More and Good Spirits, a Wenatchee-based company with stores here — are also allowed to offer similar tastings, though not any of spirits just yet. A measure to allow licensed spirits retailers to give out small samples (a half-ounce or less at a time; not totaling more than 1½ ounces per person) was presented to the state Legislature during the current session and as of press time was still under consideration.

Samples at a grocery store with a promotional intent can be a quick way to try something new, but a class could be a better option for those looking for a more detailed overview on beer or wine.

The chance to broaden one’s background and palate for beer and wine is one of the main reasons people sign up for the beer and wine classes ($20-$25) taught by Rocket Market’s wine steward Matt Dolan.

The South Hill neighborhood market and specialty beer/wine shop, tucked off the corner of 43rd Avenue where High Drive veers west and turns into Hatch Road, has been offering beer and wine education events for what Dolan believes has been nearly a decade.

Mostly, Dolan wants people to have fun and enjoy themselves in a casual setting, while hopefully discovering a new beer or wine selection that maybe they’d never try under other circumstances.

Rocket Market’s educational events differ from a traditional wine tasting, because Dolan offers guests a varied selection of wine or beer that’s usually selected for how it ties into a class theme, like “South African Wine Safari” or “Global Bubbly.” On the other hand, tastings at or hosted by a specific winery or brewery typically would only include selections from that maker. Sometimes, though, Dolan invites a winemaker to present at a class.

He prefers to call Rocket Market’s weekly classes “an experience.”

“Classes imply learning, but I always say that learning is optional,” says Dolan.