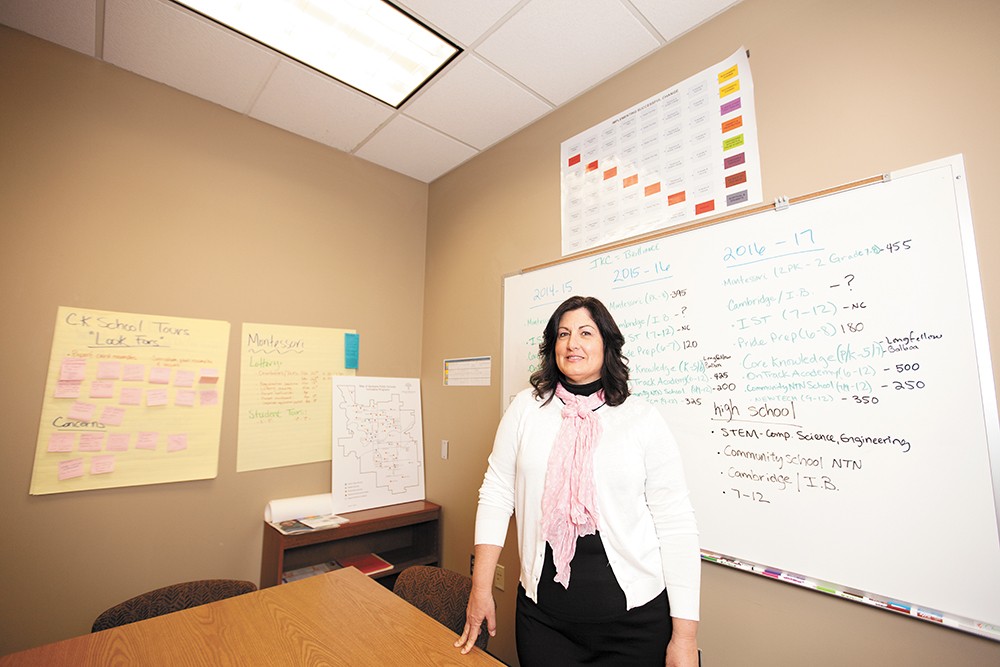 It's less than a mile between Balboa Elementary and Westview Elementary. They exist in the same district, under the same central administration, and feed into the same middle school.

But at Balboa — and at Longfellow Elementary to the southeast — teaching is going to be different. While elementary schools in the rest of Spokane have adopted "Journeys" as their new English language arts curriculum, Balboa and Longfellow have gone in another direction.

This year, Balboa tested out a curriculum called "Core Knowledge" in the kindergarten, first and second grades.

"The staff that piloted it has continually, since September, been coming in and showing me data around student learning," Balboa Principal Heather Awbery says. "It is truly delivering deep content knowledge to kids starting in kindergarten."

Reading instruction comes through phonics, with a hook: Beginner books are careful not to use words before students are ready to learn them, and deceptive letters — say, the "c" in the word piece — are placed in bold to let students know to slow down and carefully consider how to pronounce them. Yet at the same time, through classroom discussions, lectures, and visual aids, teachers explain deep and complicated topics to young kids — everything from cycles of nature to the War of 1812.

Next year, Balboa is expanding the curriculum through the fifth grade. Longfellow is different from middle-class Balboa, but it's using Core Knowledge next year as well.

"Eighty-three percent of our students are students of poverty," says Longfellow Principal Meghan Anderson. "By fifth grade in high poverty schools, you often see a slip in reading scores. There's a switch, the vocabulary and the text complexity really ramps up. They don't have background knowledge or access to the vocabulary."

She says the Core Knowledge curriculum was developed specifically for high poverty schools. At Balboa, the choice to go for Core Knowledge was unanimous, while at Longfellow it had 90 percent support.

The concerns from the holdouts, Anderson says, weren't about the curriculum itself.

"It's that we're doing something different than the rest of the district," Anderson says. "How will the district support this? Our district hasn't done these options like this before. We're breaking new ground."

The Core Knowledge curriculum is just one small entrée in a buffet of different options that Spokane Public Schools plans to offer.

In one sense, the world of education is moving toward consistency. No Child Left Behind, state standardized tests and the Common Core standards all represent the ways in which schools across the country are becoming more and more uniform.

But on a local level, Spokane Public Schools is moving in the opposite direction. Ever since Shelley Redinger became superintendent in 2012, the district's focus has turned to offering a vast array of options.

Charter schools pose the clearest example. Where districts across the state lined up to officially oppose allowing charters to exist at all, Spokane Public Schools rushed to become an authorizer: The first charter school authorized in the state, Spokane's Pride Prep, not only got approval from the district, the district assisted the school's creator every step of the way.

"Options" is the catchphrase. This past fall Redinger added two new administrative positions as part of the newly created Innovative Programs department. A $525,000 grant from the Bill and Melinda Gates Foundation helped pay for salaries for the department and travel for staff to visit innovative schools.

It also helped Spokane Public Schools join the "Portfolio School District Network" in January. The group of 43 like-minded districts offer each other resources and advice for how to expand options in their schools.

"It's hard to think of one-size-fits-all solutions for all kids," says Mike DeArmond, senior research analyst with the Seattle-based Center on Reinventing Public Education, which assists the network. Instead, he says, the thinking is "less 'How do we directly run a bunch of schools?' and more 'How do we oversee a system of schools that's high-performing for all students?'"

The district hopes to roll out options — many that have developed naturally, school by school — across all grade levels in Spokane. Madison Elementary may center on the visual and performing arts. North Central High School, which already has unmatched science offerings, is studying the idea of bringing select seventh and eighth graders into the school, sort of like Running Start for high school instead of college.

Someday, there may be a dual-language school — Spanish or Mandarin, say — serving as a language immersion program for students. The district may add International Baccalaureate programs at some schools.

But change, even innovative change, can be risky: In the Coeur d'Alene school district, the International Baccalaureate program was eliminated after intense opposition from social conservatives. Meanwhile, the East Valley School District spent years moving away from the middle school grade configuration, despite intense criticism. After more than three years, a school board election, a superintendent resignation and a board vote, East Valley has ditched the plan and is restoring traditional middle schools.

And in Spokane, one relatively minor change as part of the Portfolio district strategy — the move of the Jefferson and Balboa elementary Montessori programs into one new school — already has sparked serious backlash from some parents. The district hurried to meet with frustrated parents on multiple occasions to assuage their concerns.

"Only 10 percent are not actually moving to the new location," Vaughn says. "There might have been some backlash, and there was obviously some upheaval, but once the dust settled, 90 percent of the kids are going to continue on with the program."

It hints at the political and logistical challenges to the notion of options for parents. The most obvious hurdle is transportation. Right now, transportation outside of school boundaries must be entirely parent-provided: If a parent on the South Hill wants their child to attend Balboa or Longfellow up north, they have to drive them there. Yet many parents — especially low-income ones — don't have that option.

"We believe from an equity standpoint, we really need to provide transportation, but it comes at a huge cost," Vaughn says.

It's an issue the school board is keenly aware of, but not one they've come close to solving yet. For now, though, Vaughn says enthusiasm is building among teachers, administrators and parents for the new slew of options.

"I think people are hungry for innovation," Vaughn says. "People are really excited about it." ♦