One South Hill woman loves what the district's doing. The other hates it. 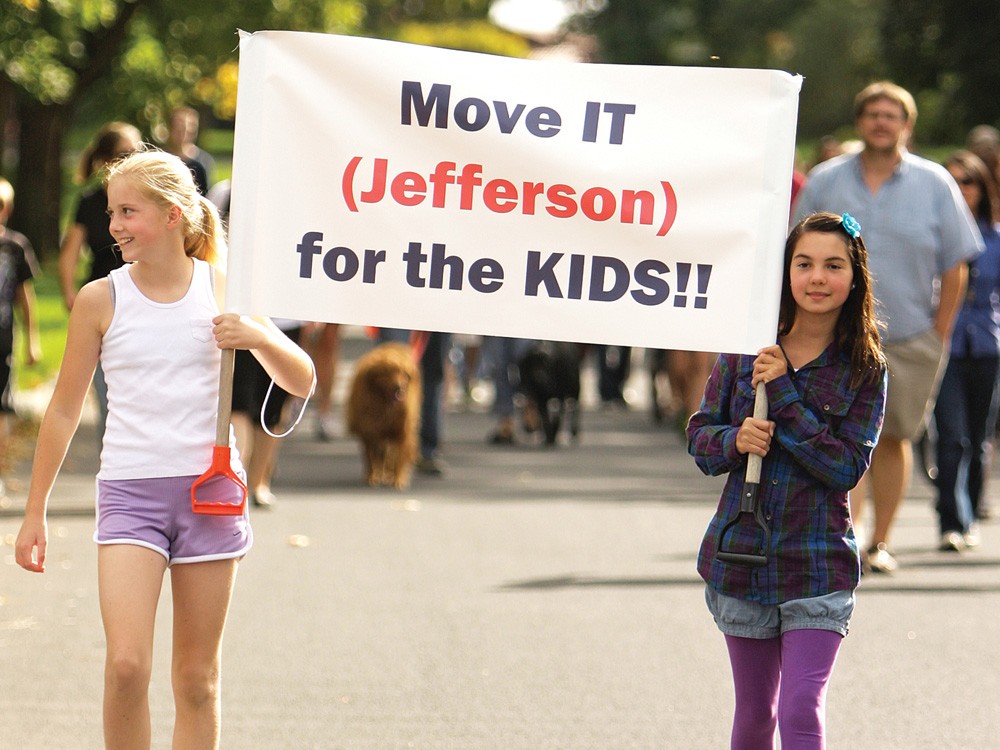 Young Kwak
Students marched in support of moving Jefferson Elementary.
Saly Fullmer is wearing a bright teal shirt and hoop earrings, waiting at a Starbucks across the street from Jefferson Elementary for news of her granddaughter’s birth and talking about her race to become a Spokane Public Schools board member.

Jefferson, it turns out, is the place, both geographically and conceptually, where Fullmer and her opponent, Deana Brower, first battled. And what they battled over — whether they should trust the school district — shows just how different these two very different candidates are.

Brower was on the committee that decided to move Jefferson Elementary across Hart Field. Fullmer is a member of the organization suing the school district because of this decision.

The lawsuit — and Fullmer — claims the district misled voters. The ballot language in a 2009 bond measure said the money would be used to “modernize” Jefferson. Not “move” it.

Though they’re both former public school teachers and they both live on the South Hill, their views on Spokane Public Schools differ radically. Brower beams with optimism and pride for the district. Fullmer, to put it lightly, does not. Fullmer didn’t even vote for the last school bond, which passed with almost two-thirds of the vote.

“For me, I just didn’t have enough information,” Fullmer says, adding that she doesn’t trust the district and can’t remember the last time she voted for a school bond.

“I think we’re spending too much money on administrative raises and pay,” Fullmer says. “Too many administrators trying to micromanage professional teachers.”

Her biggest donor is the retired tire-store chain owner Duane Alton. On multiple occasions, he’s spent thousands of dollars to defeat school bonds. (Alton declined to comment for this story.) And she’s endorsed by Laurie Rogers, the district’s loudest critic and the author of the book Betrayed — How the Educational Establishment Has Betrayed America and What You Can Do About It, which specifically attacks the way Spokane Public Schools have been run.

Fullmer is critical of the system — the administrators, the curriculum, the teacher’s union. While Brower brandishes her Spokane teachers’ union endorsement, Fullmer is proud of her own lack of endorsement.

“It seemed to me what’s happening is the district is driving everything,” Fullmer says. “They present what they want and the school board rubberstamped it.”

Her opponent, by contrast, has faith in the school district.

“We can’t dismiss educators as being a significant part of the solution,” Brower says. “Administrators have become villainized.”

Brower does have small criticisms. She applauds the school district for their gifted programs and their programs for struggling kids, but thinks more focus needs to be given to helping the kids in the middle. And she wants the board to put out a strong strategic plan, instead of just reacting to problems as they arise.

But mostly, she praises the district for its progress at improving the middle school experience for kids, addressing dropout rates, improving school nutrition and transforming low-income high schools like Rogers.

The district, in other words, is moving in the right direction, Brower says. Fullmer calls Brower an establishment candidate, endorsed by the status quo.

Brower rejects that argument. “When change needs to come, I don’t think it needs to come by the way of hostility,” Brower says.