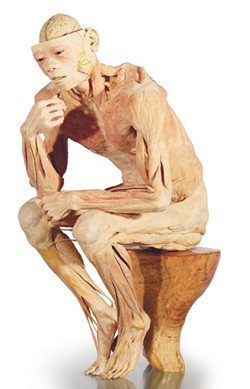 Mobius hosts "Bodies Human" at its new home through December.

It's taken years for Mobius Science Center to find the right spot. When it opened in 2012, it was right in the middle of a retail sector downtown, which is not an ideal location for a museum, says CEO Phil Lindsey. It also had high rent.

Then the Spokane Public Library came forward and allowed Mobius to use 3,000 square feet of its space. But the library couldn't charge admission, so revenue for Mobius, a nonprofit, was hard to come by. Finally, Avista offered Mobius a deal that Lindsey says Mobius couldn't refuse: For $1 per year, Avista would let Mobius use its brick building on Post Street by Riverfront Park and the Avista substation.

On Friday, Mobius opened at this new location — one that Lindsey hopes can be permanent. With its opening comes the "Bodies Human: Anatomy in Motion" exhibit, a display of real human specimens preserved through a process of replacing bodily fluids with reactive plastics, or plastination.

"We wanted to make a big splash when we reopened," Lindsey says.

Lindsey says people are often shocked when they see these human bodies arranged in various poses. The bodies expose human insides, including skeletal, muscular, respiratory and circulatory systems. (The exhibit is recommended for ages 10 and up.)

"This exhibit really brings home that we're a bunch of machines and we have to take care of them," Lindsey says. "What I find is there's always this 'eww' factor. That wears off after five minutes ... then people become interested in what they're seeing and what this means, and how it relates to them."

The Bodies Human exhibit will be at Mobius until the end of 2016.

The exhibit takes up about one-third of the space at Mobius' new location. In fact, the overall space is a bit smaller than where Mobius was years ago in the downtown retail center. But Lindsey says "we were clever with the space layout" this time, so Mobius will be able to do more things.

Eventually, there will be a makers space and 3-D movie theater, along with other traveling exhibits.

"Our goal moving forward is every six months to have something fresh," Lindsey says. "We're very much keen on not letting ourselves rest on our laurels."