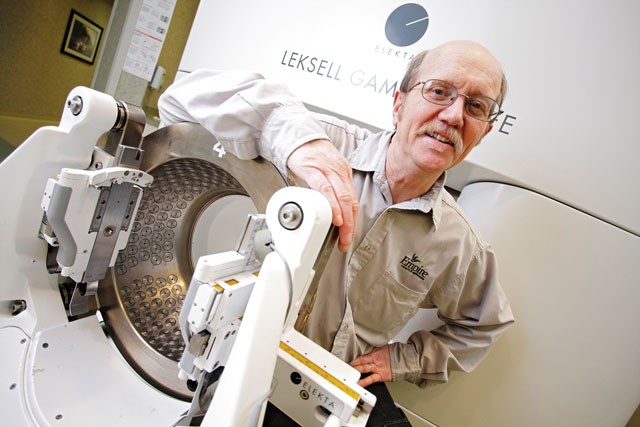 George Thompson can tell you exactly how long it’s been since his last recurrence of cancer: “It was 55 months ago. But who’s counting?”

The 54-year-old Montana native (and biomedical technician at Deaconess) has good reason to be tracking the days. “At 60 months, I can use the R-word,” he says. “Remission.”

And it’s been a long time coming. Since 1992, Thompson has battled melanoma, an aggressive form of skin cancer that began as a mole on his shoulder and metastasized to his lymph nodes and then his brain.

His journey began with the removal of the malignant mole. A few years later, he found a lump in his armpit while showering — the cancer had spread to his lymph nodes. Surgeons removed 24 lymph nodes, and he received radiation and chemotherapy. Time passed. He found another lump. That was treated. Then another. In 2003, he began not feeling well; an examination revealed a tumor in his cerebellum, the center of balance — another metastasis of the original melanoma, and just as aggressive.

“By the following Tuesday, [neurosurgeon] Alex MacKay was inside my skull, cutting out the tumor,” he says.

A few months later, he was back with Dr. MacKay for a follow-up examination. “He looked at the X-rays and said, ‘I don’t like this spot in your brain stem.’ That’s when I went into the gamma knife.”

That’s not a typo. George literally went “into” the knife. The gamma knife isn’t a physical knife; rather, it’s a machine that uses intersecting beams of radiation to precisely attack tumors or lesions within the brain, often in areas that are inoperable with traditional surgery. In Thompson’s case, his last tumor was buried deep within his brain stem, a highly sensitive area not reachable with standard surgery.

Working at Deaconess, Thompson was familiar with the gamma knife — operated by Gamma Knife of Spokane, inside the Deaconess Health and Education Building — and with the doctors who would be treating him. Even so, the procedure held some surprises.

“I had done high-dose radiation, I had done chemo,” he says. “The big surprise for me on the gamma knife is that the [frame] that clamps on your head doesn’t screw to your skull — it screws into your skull. It has points on it. It goes right into the bone.”

Other than that, he says, the hour-long procedure was easy. “They’ve got your skull in the frame, and it just moves you a few millimeters this way and that way, so they can focus on the target. After having things screwed into my skull, I was like, ‘Let’s get this over with.’”

After the gamma knife treatment, Thompson went through 28 months of chemotherapy. “That wore me down, but it was the secondary infections that really got me sick,” he says. “There have been times that it’s been really tough.”

He went through a deep depression during his treatment, he says, and he worried that wife Sharlene might be forced to raise their two sons on her own. But now, nearly five years later, their sons are young adults, both serving in the military. “I got to see what I asked for,” he says. “To get the kids out of the house and get them independent.”

Over the years, Thompson has had a lot of time to think about mortality. He quotes poet Dylan Thomas: “‘Do not go gentle into that good night / Rage, rage against the dying of the light.’ Well, I’m not going to rage at it, but you know… I’m not going to give up.”

Mostly, though, the last 16 years — and especially the last five — have given him a sense of gratitude for every moment. “In the past five years, I’ve probably grown more than I have since my early 20s,” he says. “I’ve had lots of prayer and medical miracles. I’m a statistical anomaly, because most people with melanoma don’t survive five years, and I’m 16 years into it… and 55 months since the last one.

“So. When I wake up in the morning, it’s a good morning.”