The Honky Tonk set is amazing. And thank God for that. 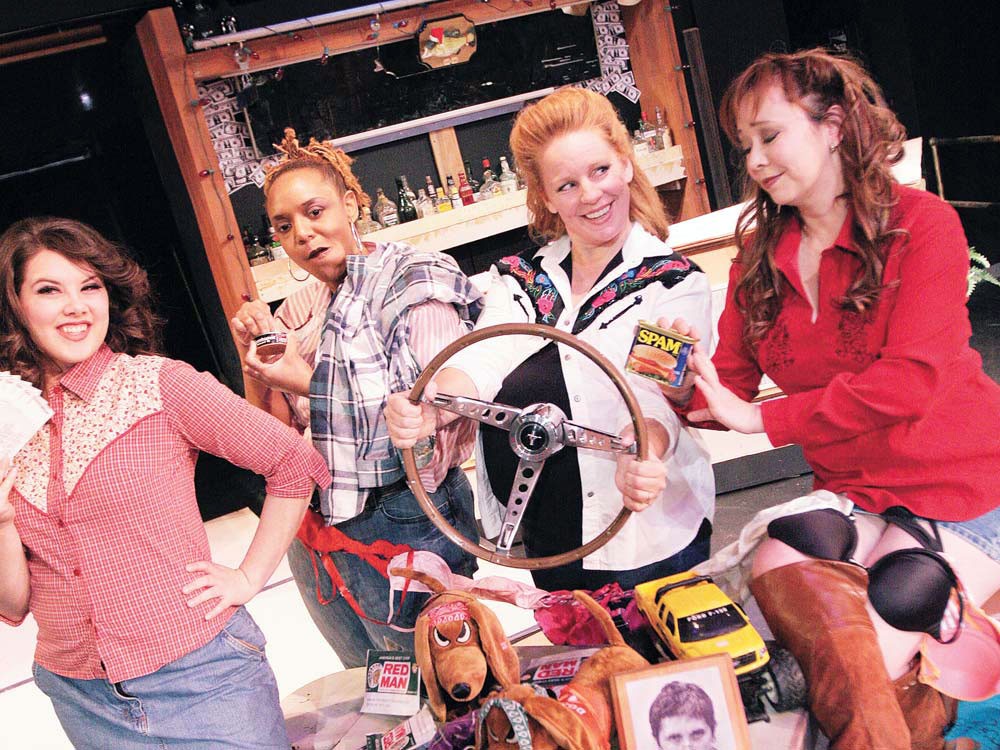 Stage left is given over to a large bar backed by a mirror. Two wooden tap handles protrude above the bar, and two bar stools stand nearby. A Christmas stocking dangles from a nail in the bar’s wooden-plank facing — which consists of a row of horizontal beige boards, then a row of grayish boards arranged vertically, and finally a bottom row of two more horizontal beige boards.

Just below the mirror, 33 liquor bottles are displayed — some dark, some light, some tall, some squat.

The mirror is topped by a lacquered trophy fish sporting a Santa cap. Just above, the location is identified in large block letters — rather redundantly, I thought — as “HONKY TONK.”

On the mirror, numerous fingerprint smudges were visible. Also affixed to the glass were wads of play money. (There were 98 “dollar bills.” I counted.)

A standup comedy routine (the “curtain speech”) was delivered before the show. It went on and on, could have stopped in a dozen places, and delayed the start of the play by 18 minutes. I paid it no mind, as I found myself enraptured by every detail of this production’s setting.

Imagine my surprise and delight, for example, upon discovering that the onstage table nearest me used four wrought iron S-shapes to support its spindle leg with five, six — no, seven — turns, each having been crafted in a pleasing and symmetrical fashion.

Over the central doorway looms a deer head with 10-point antlers. Long strands of silver tinsel hang in the doorway.

The wall on the stage-right side of the central doorway features battered Washington license plates, including the numbers CEC 916, GKG 932 and even TE 8185.

A raised area, stage right, provided an alcove from which various sounds emanated. This area was enclosed in chicken wire, taut across a wooden frame with six upright pieces and garlanded with 27 orange Christmas lights. (One was burned out.) A large sign above the alcove proclaimed, confusingly, “Don’t feed the band.”

The knee wall supporting the chicken-wire area was wallpapered with flattened cardboard liquor boxes: Visible were the insignias of Seagram’s VO, Tanqueray, Black Velvet and Popov.

For those of you scoring at home, I am informed that 36 songs were performed in 84 minutes of inaction, with the second act eventually called to a halt by the mercy rule.

Just as I was studying the disco ball (11 seconds for each twinkling revolution), a woman — I didn’t catch her name, or what she was singing about, or why she wanted me to dance with her — interrupted my reverie and coerced me into an onstage jig. Soon she was issuing a musical request, imploring Santa to, as she put it, “come down my chimney,” and urging him, in addition, “to bring my baby back ho-hoho-home.”

Oh, look, on the far side of the set — I hadn’t noticed this before — there are eight more license plates. Unusually, JU 5152 is a Montana plate.

The overhead lighting grid, as I discovered upon investigation, deploys 53 lights, of which — as I determined during one musical number or another, I forget which — some 16 were illuminated (four of them blue, one partially blocked by a heating vent). There are many wires and cords, marvelous to behold, draped and coiled over the various metal bars of the lighting trellis above, and much may be learned by diligent study of them. Meanwhile, for some reason, the other audience members were distracted by whatever it was they were looking at during the allotted performance time.

The Holiday Spectacular set was designed by a Mr. Scott Nicks, and I wish to extend my personal thanks to him for the diverting entertainment afforded to me by his bar stools, chicken wire and license plates during the 102 minutes in which I was compelled to look at them.