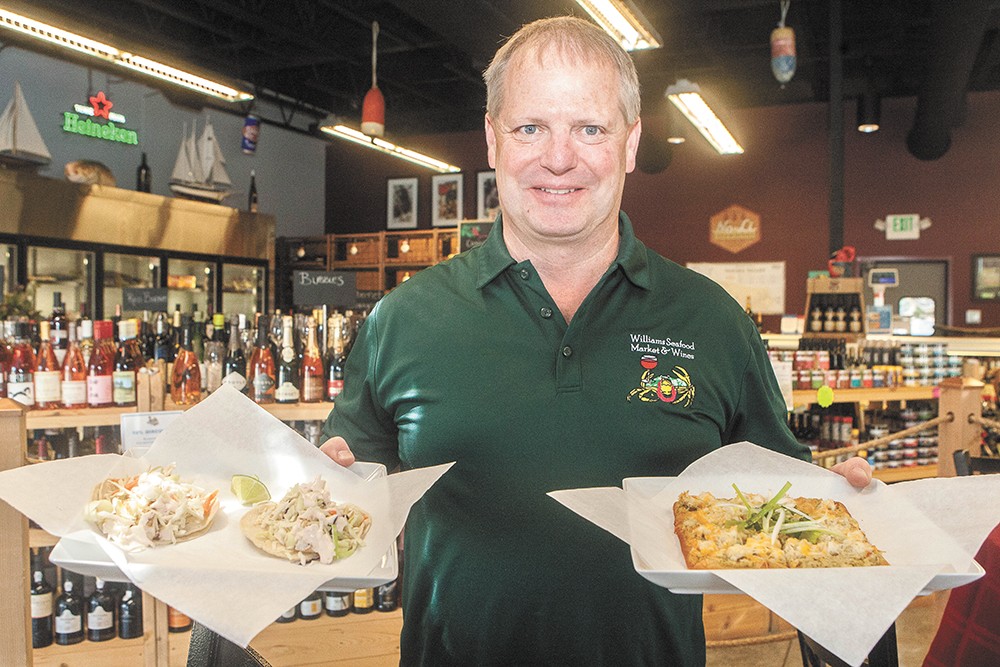 Mike Offield resisted the idea of adding a restaurant aspect

to his seafood-focused market, but his wife kept working on him after he moved Williams Seafood Market & Wines to Spokane from the valley four years ago.

"Never say never, because then it happens," Offield says with a laugh about the addition earlier this year of a four-table café and menu dotted with wraps, sandwiches, flatbreads and tacos. "I just said 'No, absolutely not.' And now we are doing it. And it makes sense."

Williams Seafood Market & Wines has long been known for its wide selection of quality, tasty product — the store first opened in 1948; Offield is its third owner — so adding food prepared from the same salmon, crab, shrimp or cod that people take home was a natural evolution. Offield was able to update his business license, too, so people can enjoy a glass of wine or beer from a sizable collection of options alongside a smoked salmon wrap or crab-and-shrimp sandwich.

"We're getting more people to come in and stop and have a flatbread and glass of wine, or a sandwich and a beer, on their way home from work, maybe to catch up with friends," Offield says. "It's not really a bar setting. It's a lot quieter, and you don't have all the bar stuff to deal with."

Much like the market, the café in the shop's corner keeps it simple and straightforward. Only real crab is used, and the shrimp is wild-caught. Offield calls the crab-and-brie dip one of his favorite items — "it's not that artichoke crab dip you see everywhere" — and he notes that none of the sauces include mayonnaise, because "we're trying to be healthier. No one ever notices, but we add a little flavor and it's better for you." After sampling a crab sandwich, I can vouch for not missing the mayo.

While the space dedicated to the café is tiny compared to that dedicated to wine or seafood to take home, it could grow if the lunches — served during all hours Williams is open — prove popular.

"We only do seafood. There's no turkey or roast beef happening here," Offield says. "We're easing into it. I'm a little old-fashioned. I want to make sure we do it right as we go." ♦