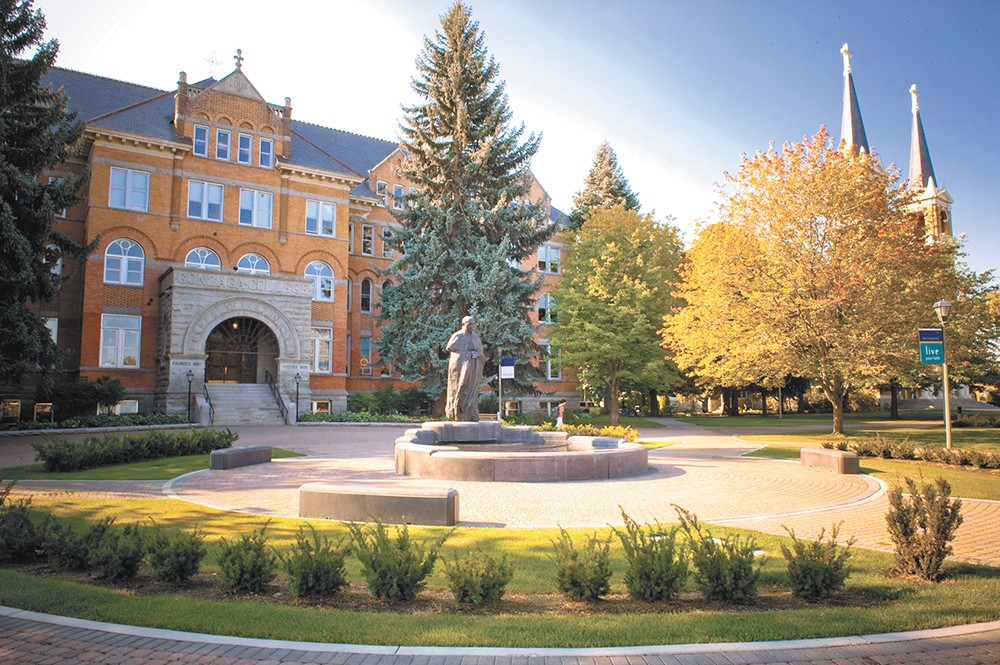 Jennifer Raudebaugh photo
Students have called for Gonzaga to divest from fossil fuel companies for years.

Just three months ago, Seattle University made a commitment to divest its endowment of fossil fuels by 2023. Though students had been asking for such a commitment for years, it was in many ways a bold move: Seattle U became the first university in the state — and the first of 28 Jesuit universities in the country — to do so.

For Tori Shaw, a senior at Gonzaga University, it signaled optimism for the cause she's been fighting for. Shaw is one of several members of Fossil Free Gonzaga, a group that in recent years has urged the university to divest from fossil fuel companies, like many other institutions around the U.S. have. Gonzaga, too, is a Jesuit school with a similar-sized endowment as Seattle University. If it could be done there, she thought, why not here?

"To me, where I'm most passionate is that we are a school that values social justice and caring for the planet," Shaw says. "And I just think that profiting [from investing in fossil fuels] is just a discrepancy in what we say we do."

But last week, Gonzaga decided it wouldn't divest from fossil fuel companies. Instead, the Board of Trustees agreed to use $10 million towards new investments, which may involve companies that reduce carbon emissions and greenhouse gases, that seek solutions for climate change, or that otherwise "promote social responsibility."

It was an underwhelming response to the activism on campus hoping Gonzaga would join the list of institutions that have divested from fossil fuels. Gonzaga, however, argues it's a positive step toward combating climate change. Investing in clean energy, the university argues, can have a wider impact than simply divesting from fossil fuels.

"I believe stepping away [and divesting] is a symbolic gesture. It doesn't, in our view, actually create change. It would add someone like Gonzaga University to a particular list," says Joe Smith, Gonzaga's chief financial officer. "But I feel like we're adding ourselves with this set of strategies as well."

The call for schools to divest from fossil fuel companies has become popular on colleges in recent years, as the projections for how climate change will impact the world become more dire. On almost every college campus, there's a student group urging the university to go fossil free.

Yet many activists admit divestment remains largely a symbolic move. Taking away university investment in fossil fuel companies alone, they know, isn't likely to change the course of climate change.

"I would say that I would agree with it being symbolic, in the sense that it's very difficult to say that by divesting we're going to move the needle on greenhouse gas emissions," says Phillip Thompson, a professor and the director of the Center for Environmental Justice and Sustainability at Seattle University.

But "symbolic" isn't synonymous with "meaningless." The divestment movement itself could influence political change, Thompson says. By divesting from fossil fuels, he says, Seattle University aligned its investments with its institutional values. Activists argue divestment is a small sacrifice to make a powerful statement. At Gonzaga, for example, investment in fossil fuels reflects less than 5 percent of the endowment.

And it's not like divestment itself is unprecedented. Those pushing for divestment from fossil fuels point out that universities divested from companies in South Africa in the 1980s, helping end the system of apartheid. Divesting from companies contributing to an existential threat like climate change, then, could be seen as a logical move.

He says it was expected and anticipated that once there was a leadership change in South Africa, the restrictions on investment would come to an end. Smith adds that even though less than 5 percent of a $230 million endowment may sound like a small sacrifice, it would "significantly impact" how managers could manage funds of the endowments. In other words, he says, you can't just sell the 5 percent on its own.

Additionally, he says the university seeks to grow its endowment by about 7 percent each year. It's not as simple as choosing to replace the investments in fossil fuel companies with something else.

"Trying to hit a 7 percent return is a difficult goal in and of itself," he says.

Ultimately, Gonzaga decided the best way fight climate change is to invest in companies contributing to that cause. In addition, the university committed to evaluate fund investments according to its "socially responsible" investing criteria, communicate the importance of socially responsible investing to managers, become more transparent in its investments and revise the investment policy when needed.

It's a different approach than Seattle University, which hasn't committed to invest in green companies. That's why Smith says the student activism worked: The university listened, thought about and considered the recommendations.

"Our students were heard," he says.

Shaw, the student with Fossil Free Gonzaga, isn't surprised the university to respond the way it did.

"It's definitely disappointing," she says. "It doesn't negate the fact that we're still investing a similar-sized chunk of money into fossil fuel."

"It's progress, in the sense that the board spent two years thinking about this and has decided to do a better job in considering our values and how to invest funds," Henning says.

But it's not enough, Henning says. The $10 million earmarked for impact investing is a "good idea," he says, but one that doesn't solve the underlying issue. And he notes that there's no guarantee that it will go towards companies specifically combating climate change. As for the other four changes the university committed to, Henning says those were things that existed in current policy already.

Henning says the argument that divesting would be financially irresponsible is based on the idea of an immediate divestment. A long-term divestment plan like Seattle University's is still possible, he argues.

"If we do what Seattle U is doing, it would have no discernible impact. The financial argument is really neutral," he says. "There's plenty of ways in which we can do it — what's lacking is the will."

Still, divesting is a decision that could lead to other ramifications, Smith says. In some places, students have called for colleges to divest from other industries that don't align with their political beliefs, like gun companies.

"If Gonzaga divested from 15 different things, it doesn't leave a lot left," Smith says. "It's not the primary argument [for not divesting], but where do you draw the line?" ♦