Is it possible to pass on my predilection for glorious mustaches? 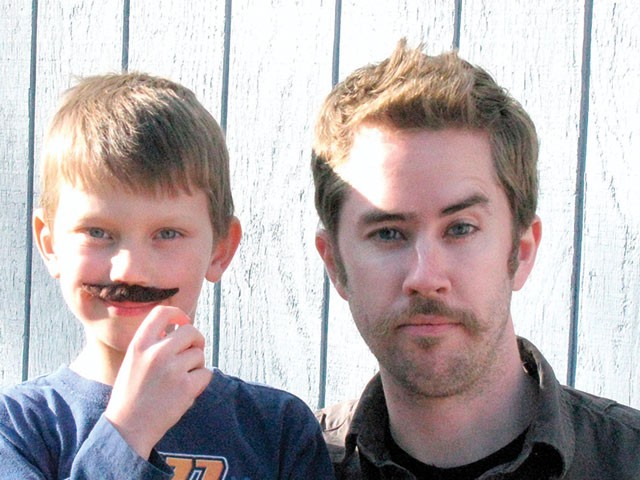 The author with his nephew

I spent a recent weekend in Bellingham visiting my brother and his family, and while some of our time together we passed catching up on adult stuff, most of our attention was focused on his two kids. For hours, I watched them run around, talk to themselves, play football in the backyard.

And from one moment to the next — in this expression or that smile — I would see in 3-year-old Eleanor’s eyes brief flashes of her mother’s (and grandmother’s) eyes. Seven-year-old Davis would suddenly speak with my brother’s mouth. Occasionally, I would even spy reflections of myself — fleeting blossoms of the genetic seeds that he and I (and they) share.

Which got me thinking about what my own children will look like, whenever I get around to siring them. Would a son inherit my gift for curly, ostentatious facial hairstyles? Would a daughter be the reluctant heir to my (and my mother’s) knobby shoulders?

That got me on another, weirder track. Does my mustache even matter? What if I were to laser it off and then get shoulder implants, brace my crooked teeth and beef myself up in the gym? Would my child inherit the new and improved me’s genes, or the same DNA my brother and I were born with?

Jean-Baptiste Lamarck might have surmised the latter. The French biologist asserted in 1801 that we pass along traits developed during our lifetimes.

That, for instance, early, stubby-nosed elephants stretched their trunks to reach food and water, then passed on their extended trunks to their kids, leading to the long-trunked elephants we know today.

Of course, Lamarck came before Charles Darwin, who 50 years later blew the former’s theory out of the water. Elephants didn’t pass on their acquired trunks to their descendants, Darwin said. Those who happened to be able to reach further survived and reproduced, and those who couldn’t didn’t.

In other words, your behavior doesn’t affect your DNA. You pass on the same stuff you’re given at birth.

Subsequent study has seconded Darwin’s notions, showing that a marathon runner’s fitness isn’t passed onto his kids, any more than a dog’s cropped ears are given to her pups.

But the case now appears far from closed. “Lamarck went a little overboard,” says Washington State University biologist Michael Skinner. “[But] both of them were probably right, and it now looks like it’s a combination.”

Skinner is at the forefront of the relatively new field of epigenetics, in which scientists believe that while you can’t change your actual genes (the packages of DNA that contain the basic instructions for every living organism), you may be able to change your epigenome — a kind of dimmer switch that controls how much or how little a particular gene gets expressed.

In 2005, Skinner injected a number of pregnant female rats with a fungicide called vinclozolin and found that their sons developed low sperm counts and infertility. The fungicide didn’t affect the transfer of DNA, but it modified the mothers’ epigenome, causing the kids to shoot blanks.

In what Discover magazine called one of the 100 top science stories of 2007, a Texas researcher found that female rats were sexually spurning even the great-grandsons of Skinner’s injected rats. “The male rats were fertile and looked healthy,” Discover wrote. “Still, something about them — perhaps their smell — was a total turnoff.”

What this means is that environmental factors can have a kind of pseudo-genetic effect by screwing around with the epigenome’s dimmer switch. Not only that, but the effects can last for generations. And if this is the case in rats, might it also be possible in humans?

If so, that knowledge could lead scientists to develop drugs that change the way diseases are expressed just by manipulating the dimmer switch — dialing down bad genes and cranking up good ones. If nothing else, Skinner says, getting your epigenome mapped at age 20 could give doctors a strong sense of the diseases you’ll be susceptible to later on in life, and you can plan prevention accordingly.

Skinner says the discovery of the epigenetic effect has had a “quantum leap” effect in the scientific community. “Simply knowing that gives us a lot of power.”

But the power to imprint “mustache” into my blessed progeny? Probably not, according to Skinner’s studies. Which is a pity, as the kids pictured above sure look good in those handlebars. (And I wouldn’t wish my mother’s shoulders on anybody.)

Still, Darwin might have been shocked to learn that my offspring may indeed feel the reverberations of the air I breathe, the foods I eat and the abuse I occasionally wreak on my liver. I’ll be thinking about my niece and nephew next time I hoist another vinclozolin cocktail at the bar.

The body's overreaction to coronavirus can wreak havoc. A WSU researcher may have found a way to tamp down the response