Anxious about your processed food product? Work out your worries: Ask annoying questions. 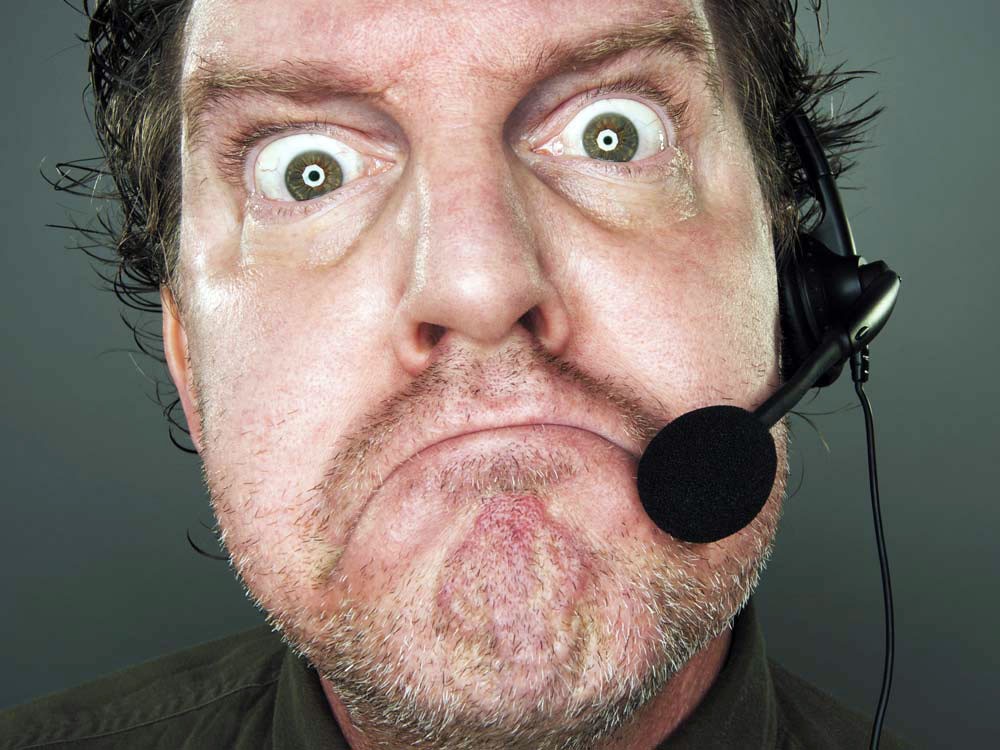 I'm hanging out by the office microwave, waiting for my frozen meal to get hot ‘n’ tasty, when a co-worker passes by and remarks, helpfully, “You’ll probably get cancer from that.”

And there it is, the 53rd item in a list of 82 ingredients or sub-ingredients: one very suspicious substance.

Soon I was on hold for a customer service representative with ConAgra Foods (“Food You Love”) in Omaha, Neb.

During my seven-minute wait, the third canned message abruptly asked, “How often do you clean the outside of your cans and bottles?” (I snorted. Uh, never.)

“If you’re like 66 percent of Americans, probably not very often.” (Yeah, we have stuff to do.)

But right away, I want to know about the other 34 percent. These bottle- and can-rinsers: Do they also iron and fold their underwear?

“Rinsing them off can help eliminate harmful bacteria,” the robot voice informs me. But I had other, more serious, concerns.

“Welcome to ConAgra Foods. My name is Bridget.

How may I help you?”

“I have a question about one of the ingredients in my frozen meal.”

“OK, sure, I can help you with that.” Bridget had a nasal but cheery Minnesota lilt to her voice.

“Uh-huh. And what exactly is it that you’re looking for? Are you concerned that it has allergens?” “No, my concern is that it’s derived from grasshoppers.”

“Let’s see here … you know what? … Let’s see here … Would you mind holding for one moment?” Here comes the gruff supervisor, I thought. But no — Bridget returned just one minute later, armed with knowledge. She had gone to the Internet and read the exact same article that I had read about locust bean gum! It was on Wikipedia.

Locust bean gum, we had both learned, is derived from the carob tree (sweet! like chocolate!) and is commonly used as a thickening agent in foods. That’s all well and good, but I had read further in the article than Bridget, and here’s my concern: When used as a food additive, locust bean gum is often converted from a powder to a gel by the addition of sodium borate — now, follow me here — which is the same as Boraxo, which is a kind of soap that was advertised on Death Valley Days when I was a kid, and its pitchman was Ronald Reagan (I didn’t trust him even then), and this sodium borate is also an ingredient used in fire retardants and insecticides.

I can’t enjoy my frozen meal when it’s flavored with the same stuff that comes out of fire extinguishers.

And granted, that one time I accidentally microwaved one of my frozen dinners not for 3.5 minutes but for 35 minutes, there may have been some flames involved. Still, I don’t need any fire retardant in my sweet and sour chicken.

This was all a bit beyond Bridget’s usual scope. She says nearly 40 percent of her calls come from people simply asking for help in matters of “food preparation.” In other words, they need help following the microwave instructions.

“Did they lose the box?” I asked. She sighed and lowered her voice: “No, they do have the box.”

I'm a bit worried, too, about these code numbers on the side panel of my frozen-meal box. Seems all Big Brother-y. I asked Bridget, and it turns out that the first four digits identify the food processing plant — Bridget wasn’t sure where Plant 5006 is located, “but it’s somewhere in the United States.” And here’s a clever bit: In “0229,” the zero stands for 2010, and my frozen meal had been lovingly created on the 229th day of the year.

Toward the end, “P115” indicates the particular kind of poultry used. Poultry meat of Type No. 115 — that’s reassuring.

Ya gotta love the staying power of frozen food.