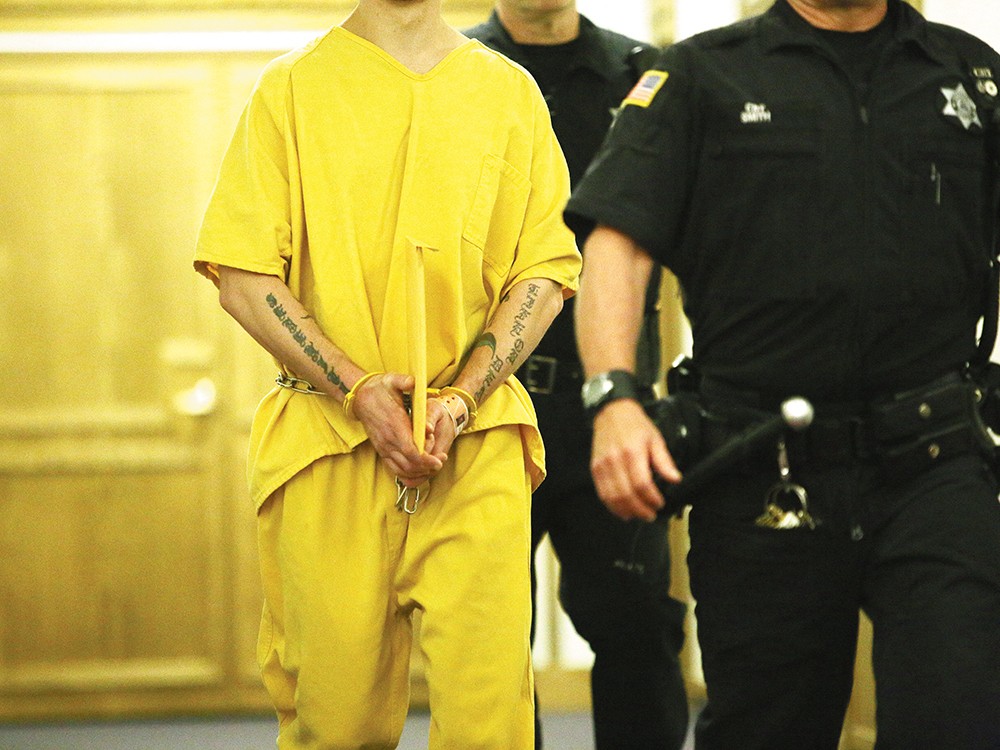 Young Kwak
A handcuffed man is escorted in the halls of the Spokane County Superior Court.

Chains rattle lightly, clinking and jangling, as an inmate walks. A waist shackle, also called a “belly chain,” loops around his or her hips, locking into handcuffs in front of the body.

Going back to English common law, criminal courts have considered shackling defendants during trial proceedings an absolute last resort. In multiple cases, the U.S. Supreme Court has held that visible restraints could make a jury perceive a defendant as dangerous, or inhibit the ability to communicate with an attorney.

“Not only is it possible that the sight of shackles ... might have a significant effect on the jury’s feelings about the defendant,” the Supreme Court states in a 1970 opinion, “but the use of this technique is itself something of an affront to the very dignity and decorum of judicial proceedings that the judge is seeking to uphold.”

But what about when a jury is not in the room? When a defendant in jail custody makes a pre-trial court appearance — when the public is not watching — should the exception become the rule?

Spokane County Jail officials earlier this month expanded the local policy on waist shackles to make use of the restraints on all jail inmates appearing in Superior Court. Judges can call for the shackles to be removed, but inmates generally will be expected to remain in the shackles throughout any pre-trial court hearings.

Capt. John McGrath, commander of the county’s Detention Services, says a significant increase in the number of inmates who must be taken to court has helped drive the new policy. He says the decision did not stem from any assault or escape attempt, but from a review of safety protocols as the jail handles more court appearances.

McGrath acknowledges he has heard opposition to the new policy, but he stresses inmates would not wear the shackles during any trial with a jury.

“It’s just basic security,” he says. “Without a jury in the courtroom, I don’t know how it would be prejudicial.”

Case law typically allows for inmates to be shackled during pre-trial hearings, presuming judges are not as susceptible to any prejudice based on the appearance of the extra restraints. But many courts still consider it a case-by-case measure instead of a default practice.

The Jail Transport Unit proposed the change a few weeks ago, introducing the policy to restrain all inmates during a meeting with Superior Court judges. County officials say the judges voted on the issue, declining to oppose the policy.

McGrath says the use of waist shackles just extends ongoing efforts to ensure the safety of inmates, jail staff, court officials and the public. The jail has always sought to take every reasonable precaution to prevent assault or escape.

“Our responsibility is to make sure they are safe,” he says. “I think being proactive is part of our duty.”

Spokane County Sheriff Ozzie Knezovich says he supports the policy, explaining waist shackles have routinely been used for transporting inmates to court appearances. He says he regularly used the restraints when moving prisoners during his time with the jail in the late 1990s.

“That’s really nothing new,” he says.

Knezovich also notes some inmates may find the waist shackles more comfortable because they keep the hands at the side, instead of locked behind the back like traditional handcuffs.

Heintz argues defendants who can post bail get to appear for pre-trial hearings in normal clothes without restraints. He says those who cannot afford bail, who may face the same charges, should not have to go before the court in chains.

“It’s not fair,” he says. “It’s not right either. … The presumption of innocence has to stand for something.”

John Rodgers, director of the Public Defender’s office, says many attorneys on his staff strongly oppose the policy, calling it heavy-handed and unnecessarily broad. He says it paints all in-custody defendants with the same brush. “We’re not keen on the new policy,” he says.

Doug Honig, with the ACLU of Washington, allows that shackles might make sense while inmates move between the jail and the court, but once in the courtroom inmates still deserve to be treated as innocent until proven guilty.

Restraining a defendant while they’re addressing the court should still be a last resort, Honig says, determined on a case-by-case basis. The new policy implies every defendant is dangerous.

“Being required to appear shackled in public before peers, authority figures, and others in their community surely increases the offenders’ feelings of hopelessness,” the letter states, noting shackles can also exacerbate post-traumatic stress resulting from violent upbringings.

Beyond the appearance of the restraints, Heintz says he has seen clients struggle to read or sign paperwork while locked in shackles, sometimes complicating his ability to communicate with his clients during a hearing.

Rodgers says his office continues to put together an official response to the policy. With help from other legal representatives in the city, he hopes to convince judges to impose a case-by-case rule for the use of shackles.

“We’re trying to collect ourselves,” he says.

Meanwhile, Knezovich says he has no problem with the practice. He says the jail will continue to use two-deputy escort teams to take prisoners to and from the courthouse. The belly chains only improve the security of that process.

“I’ve never heard any criticisms,” he says of the shackles. “To me, it’s really much ado about nothing.”