A screen grab of part of the Spokane Trans Map.

A handful of local activists hope

that a map of red and green dots will steer transgender individuals away from discrimination and harassment.

Robbi Anthony, a community activist and web developer who worked on the site along with others, says that transgender people are more visible than ever, which creates more potential for them to be treated with hostility.

"It's kind of a guessing game for where people are safe," says Anthony. "These are questions that [transgender] people have to ask themselves every day."

Indeed, multiple surveys have shown that transgender people are more likely to be the subject of discrimination or violence. Nationally, the number of anti-transgender hate crimes reported to the FBI increased from 31 incidents in 2013 to 98 in 2014, the most recent year that statistics were available.

Although there are laws prohibiting discrimination against people based on their gender identity, Anthony hopes that this website will allow transgender people to steer clear of unfriendly businesses altogether.

To be designated as trans-friendly on the map, a business needs to have single-occupancy bathrooms that allow transgender individuals to sidestep potentially awkward or dangerous situations presented by multi-occupancy bathrooms. The website also relies on reviews submitted by users about how welcoming the business is to transgender people, not unlike how Yelp operates, in determining if it merits a green or red dot. Businesses also can submit statements about what they've done to be accepting of transgender people, and several already have.

But Marvo Reguindin — general manager of the Inland Northwest Business Alliance, a chamber of commerce representing 200 businesses that are either owned or are friendly to the LGBT community — has reservations about Spokane Trans* Map. He points out that the reviews are anonymous, and as with websites like Yelp, a few bad ones could stick to a business' reputation.

He says that while gays and lesbians have become a bigger part of mainstream society, the same isn't true of the transgender community; he hopes they'll become more engaged with the business community.

"It's hard for us to help that community if they're not sitting at the table," says Reguindin.

Jude McNeil — executive director of the Odyssey Youth Movement, an organization that works with LGBTQ youth — says there are apps that help transgender people find a safe place to use the bathroom. The website, which McNeil's organization had input in developing, serves a similar purpose.

"It's reflective of the state of our culture in Spokane," says McNeil. ♦ 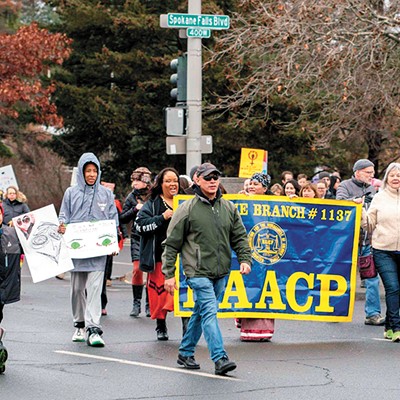