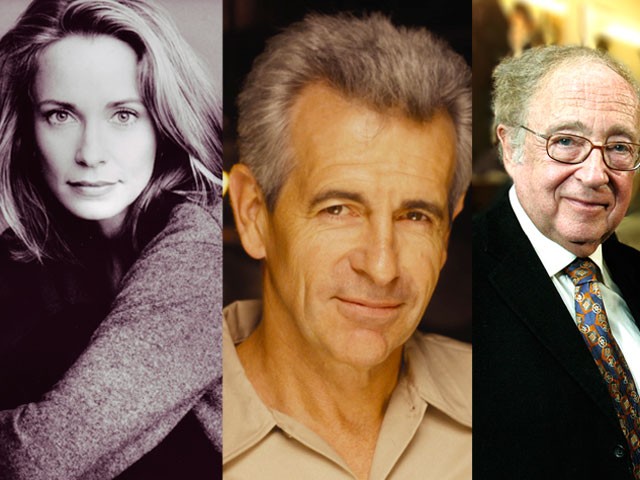 Format: Three actors reading three short stories on the theme of fatherhood; recorded live and scheduled for broadcast on public radio in June

Why June? Because Father’s Day was first celebrated a century ago, right here in Spokane, in June 1910

Short story titles: Not yet revealed, but that won’t keep us from speculating

What Sheffer will probably read: a story by Roald Dahl (best known for Charlie and the Chocolate Factory) — perhaps “The Champion of the World” (1959), in which Danny and his father scheme to ruin a mean old man’s pheasant-hunting party.

James Naughton: Two-time Tony Award winner for Best Actor in a Musical. Longtime friend of Paul Newman. Has appeared in TV commercials for Nexium, the purple pill for acid reflux.

What Naughton will probably read: a story by John Updike, whose posthumous collection is entitled My Father’s Tears and Other Stories. The title story (2006), concerns emotional repression passed from father to son: “It is easy to love people in memory; the hard trick is to love them when they are there, in front of you.”

What Thompson will probably read: a story by Maxine Swann, possibly “Flower Children” (1997), about four children of hippie parents; in a case of TMI ‘70s-style, their father tells them all about his exploits with free love. The story’s narrated in the “third-person plural” by all four kids.

A word to our listeners: You may have to sit through some retakes.

Selected Shorts is broadcast on Sundays (from 4-5 pm on KPBX 91.1 FM and from 9-10 pm on KSFC 91.9 FM). Visit symphonyspace.org/shorts. Listen to Selected Shorts’ live recording of three stories about fatherhood on Friday, April 16, from 7-8:30 pm at the Bing. Tickets: $25; free, students.